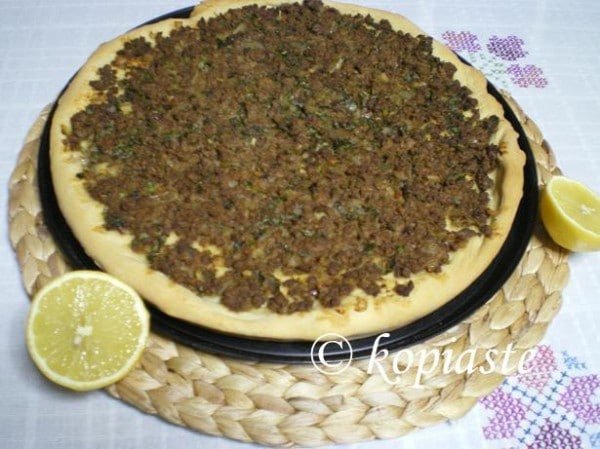 Lahmajun is one of the staple meals ofArmenia and it is often described as the Armenian or Middle-Eastern analogue to the Pizza. However, a Lahmajun has a very thin crust, and is topped with a meat sauce topping, usually lamb or beef-based, that is cooked with tomato and Middle Eastern spices..

Armenia is a mountainous country in Eurasia between the Black Sea and the Caspian Sea in the Southern Caucasus. It borders Turkey to the west, Georgia to the north, Azerbaijan to the east, and Iran and the Nakhchivanexclave of Azerbaijan to the south. A transcontinental country at the juncture of Eastern Europe and Western Asia, Armenia has had and continues to have extensive sociopolitical and cultural connections with Europe.

Armenia is a democraticnation-state with an ancient and historic cultural heritage. The Kingdom of Armenia was the first state to adopt Christianity as its religion in the early years of the 4th century (the traditional date is 301). The modern Republic of Armenia is constitutionally a secular state, although the Christian faith plays a major role in the history and identification of the Armenian people.

This country which is so far away has a lot of common with my country Cyprus as well as with Greece. Armenia is a country which has suffered a lot and its people had to leave their home country and immigrate all over the world after the Armenian genocide. Cyprus, as well as Greece were among those countries who accepted refugees and the Greek Armenians now constitute a small community in our country.

I got to know about Lahmajun from my mother, who had learned it from Armenian friends. This is so tasteful and much healthier than pizza (considering all the fat from cheese, etc.) and finally it is so easy to make. This is my entry for the event Π Day- Homemade Pies, hosted by Kitchen Parade.

The recipe is included in Part II of my e-book Mint, Cinnamon & Blossom Water, Flavours of Cyprus, Kopiaste!

Just made this for lunch, it was awesome. This is the first time we've eaten Lahmajun, and we really enjoyed it. I will definately fix this again. Great recipe!

Glad you enjoyed it :)

So thanks My recent post Yüz Jimnastiği İle Kırışıklıklara Son

I was a police officer in Culver City and visited a small food stand where I first experienced Lahmajon at Soprie's. Thanks for the information, it may be the only way I can experience the wonderful memory of a wonderful lady and her very special food.

Hi Allergy Mom. I'm glad this might help. However, it's a bit spicy so you might have to cut down a bit on the hot spices for the child. Good luck.

That looks so tasty! I'm always looking for cheese free pizza toppings due to my son's allergies, and this might be the best one yet. Thanks so much for sharing the recipe as well as the background. Libby