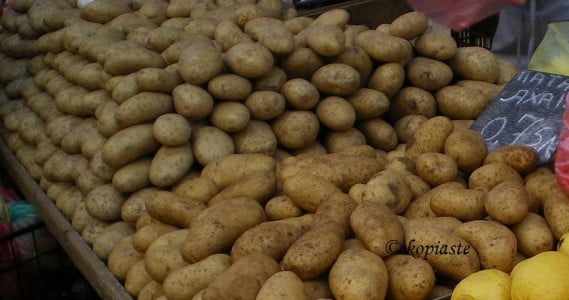 In Greece we do not have a lot of varieties of potatoes, such as yellow potatoes, blue potatoes or red potatoes nor do we have names for them. The only potatoes we have are the usual oval, brown skin and white flesh potatoes.   There are so many varieties of potatoes that after the information available on the net, I have limited my guess to the following two types: , theMondial or Spunta are closest to the ones we use in Greece and I am only presuming this from their appearance.

In Greece, as well as in Cyprus, we distinguish a good potato from the place it comes from. I do not know if this has to do with the soil or with the temperature and climate but we have Patates Nevrokopiou, Patates Tripoleos, Achaias or Kritis and in Cyprus Papates Kokkinochorion (patates meaning potatoes and the second word is the place of origin). Usually the most expensive ones are those coming from the islands and again I do not know if the price has to do with quality or if it has to do with the extra fares paid for transportation all over Greece.

This does not really make sense, as the cheapest potato comes from a North African country, so again it’s not a matter of fares paid. From the imported potatoes the Cypriot one is considered to be the best, and I am not saying this because I am from Cyprus, but although it is the most expensive potato in the market, yet people who have tried it say it is worth the money they pay for it, since paying for a kilo of Cypriot potato you can buy one and a half kilos of local potatoes.

Cypriot potatoes are not easily found but when they are I always prefer them. They are always sold in five kilo packages (in a net) with the brand and place of production tagged on the net. For those living in Greece be careful what you buy because lots of fraud has been taking place relating to imported cheap potatoes which are “baptized” as Greek by being washed in local mud soil, to look like the Greek ones.

Searching the net to find information about potatoes, I found that Cyprus has been cultivating the past two years “light potatoes” from seeds imported from Holland. The articles goes on saying that the brand is called sunlight and that these potatoes are not mutated in any way but are ordinary potatoes and apart from having 20% less calories, they are much juicier than the usual potatoes. (For those who can read Greek, they can find the article here).

So until we can get some Sunlight Cypriot potatoes, here is an easy potato recipe baked in the oven, which is not only tasty but healthy as well or at least much healthier than French fries or baked potatoes in oil, as I have used low fat ingredients but still this dish is so tasty. For my next post, I will give you a salad which goes very well with this dish. Both side dishes, combined, will make a perfect meal.

This is my participation for the one off event Potatoes, to celebrate the International Year of the Potato, hosted by Andy and Alex at Eating Leeds.

Peel and boil the potatoes (whole) until half done. Remove carefully with a slotted spoon and place in an oven proof dish.

Cut them in the middle, lengthwise and with a knife spread some butter on them, (as they are hot the butter will melt so one spoon is enough). Sprinkle with salt and a dash of pepper on them, add the milk or fresh cream and

Finally sprinkle with the cheese on top and bake in a preheated oven at 180 degrees until the cheese melts. 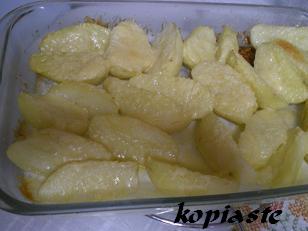 Hi Alex, thanks for visiting and leaving a message. Hope you enjoy them.

I like the idea of sprinkling cheese on the potatoes before baking them! Must make them quite different from a standard baked wedge!

Simplest dishes are so often the best!!! Ivy, I wouldn't need help to eat the whole bunch! I love potates!!!!!

Pixie was right, you are such a kind person. I shall be visiting you as well but give me a week's time because I will be away for a few days.

Hi Ivy, firstly Congrats on your award so pleased for you :)

Many thanks for visiting my blog and also for your very kind words and it's lovely to have found your amazing blog!! Now I have found you I'm sure going to visiting from now on :D

It's really great to find out how to cook or bake dishes from other parts of the world. Loving the look of your potatoes too - yum!