I am sorry for the delay in posting the round-up but as I explained in a previous post one of the reasons was to get organized but the other I did not tell you about, is that I wanted some time to get in touch with Altis, the lead Greek Extra Virgin Olive Oil brand for a giveaway.

I present to you this month’s round-up and what an amazing round-up it has been. I want to thank everyone for all your amazing and creative entries, all yourdesserts look delish! Thank you!

The entries are posted in the order I have received them. Check them out:

Eftychia, of Dream of Cakes, has made her own changes to a dessert called Shamali or (Samali). This dessert is made with semolina and traditionally is flavoured with mastic. Eftychia made her own changes and also added orange zest in the cake but also in the syrup, changing the flavour of the cake. 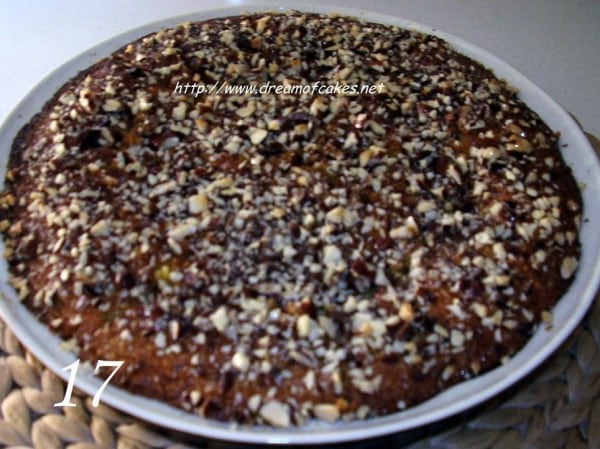 1) Strawberry & Mango Custard Pizza: Priya used a pizza crust which she cooked on the stove top and topped it with a mango custard and on top added strawberries and chocolate vermicelli. 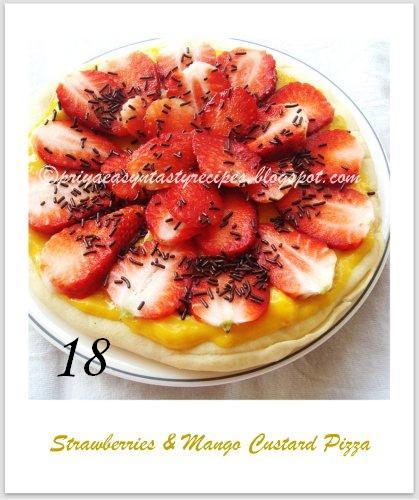 2) Strawberry Pastry Bites: Priya made these little bites using puff pastry for the base, topped it with custard and strawberries and her dessert was ready in less than half an hour. 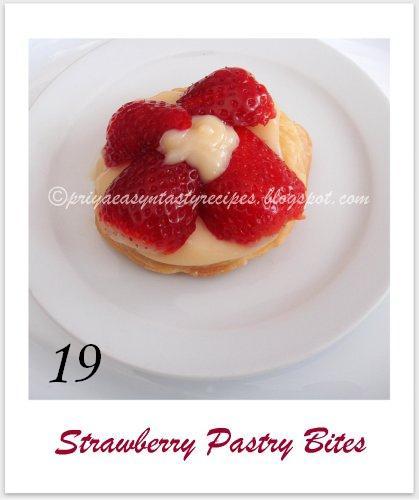 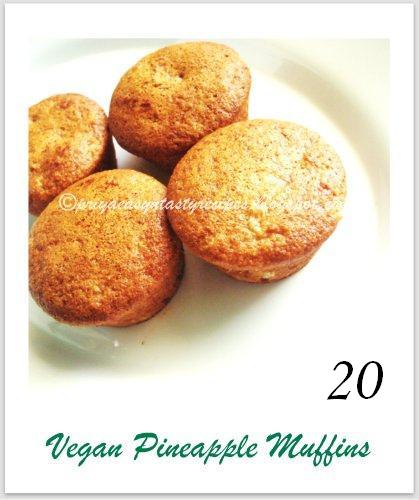 Sarah, of Spoonful of Delight,  bought a fortified  milk power for her 4 year old son to drink in order not to loose weight after playing games which needed a lot of energy.  Unfortunately the little boy did not like the milk, so Sarah came up with the clever idea to disguise the milk into this delicious chocolate, which she has named Homemade  Milk Chocolate with Cocoa Powder. 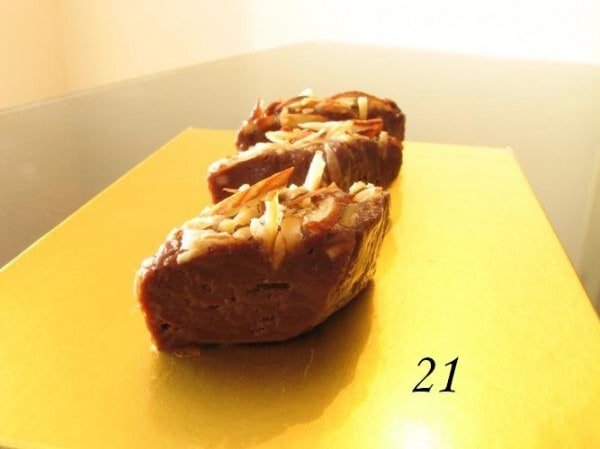 Simona, of Briciole has made Torta al cioccolato con mandorle e mela / Chocolate apple nut torte: As Simona explains to us a torte is a cake made with eggs, ground nuts, sugar and little or no flour. The original recipe for Chocolate-Apple-Nut Torte is adapted from Mollie Katzen’s The Enchanted Broccoli Forest. 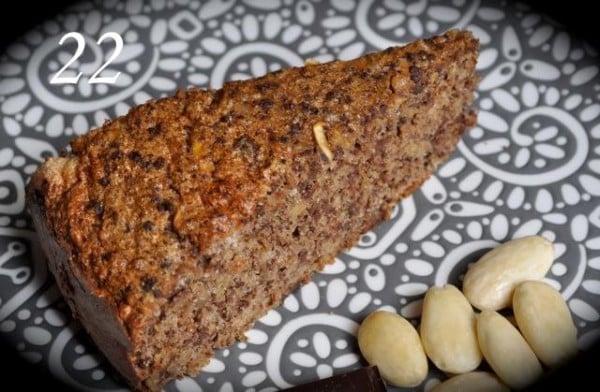 Caffettiera, of La Caffettiera Rosa, has adapted a recipe by Alice Mendrich and made lots of wonderful changes to her Cocoa Brownies. Caffettiera has made Spicy Cocoa Brownies especially for Cinco de Mayo, using piment d’espelette . She also cut down the amount of sugar and substituted it with natural cane sugar and added apple syrup, to retain some moisture in the brownies. 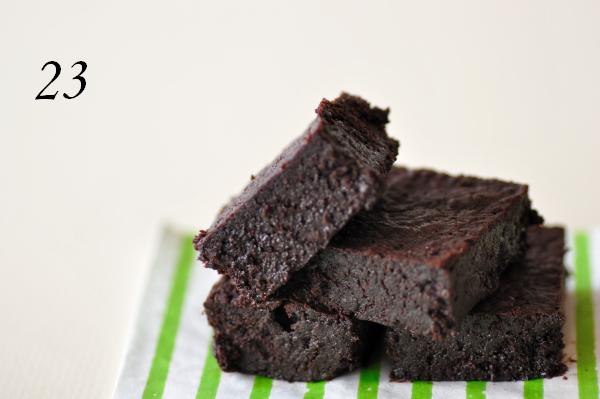 Jacquline, of Seemingly Greek: My Greek Ambition, has made a wonderful tweak to a traditional Greek dessert called Karydopita, a walnut cake with syrup, in which she has added flour instead of breadcrumbs to make it more airy and also added vanilla cream. 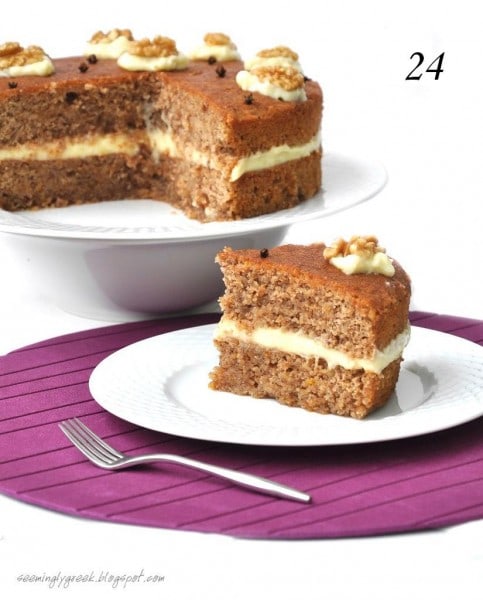 Sarah, of Spoonful of Delight, has another entry with Chocolate Coated Caramels. Sarah first made caramel which she moulded and then coated the caramels with chocolate. 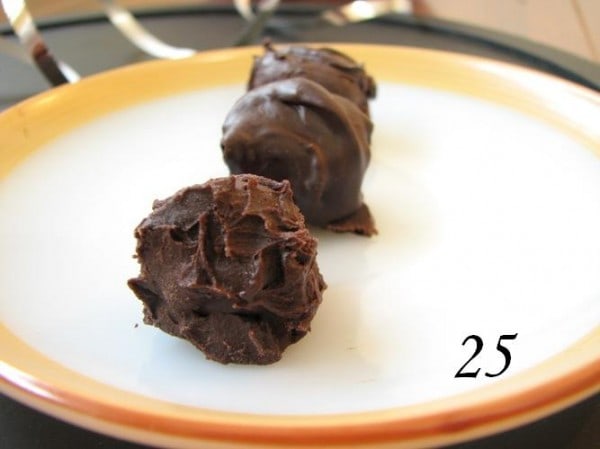 Another creative chocolate dessert by Sarah, of  Spoonful of Delight.   When Sarah was a little girl she used to dream of Heaven and do you know what she would eat and drink there?  Chocolate, of course!  As Sarah could not find what she was dreaming of, she started thinking of all the components that would make the perfect Chocolate bar – which is not too sweet but yet creamy and goey and maybe a crunch in between as well and voilà, here is her perfect Chocolate Candy Bar. 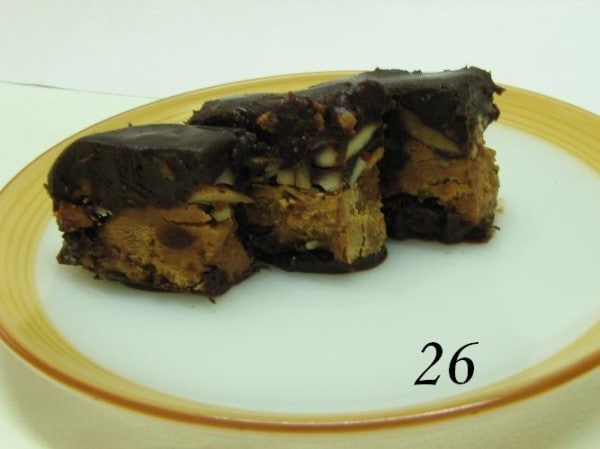 Please visit all these talented bloggers to find out more about their creative recipes. I love all of them and want to try them soon.

In case I have missed an entry I apologize but please let me know to add it.

Last but not least, here are a few of my own entries.

Olive Oil – Honey Oatmeal Bars: I found a recipe at the Quaker Website. The original recipe was for Maple Pecan Oatmeal Bars which I adapted and made healthier using olive oil and honey as well as walnuts, pistachios and craisins. 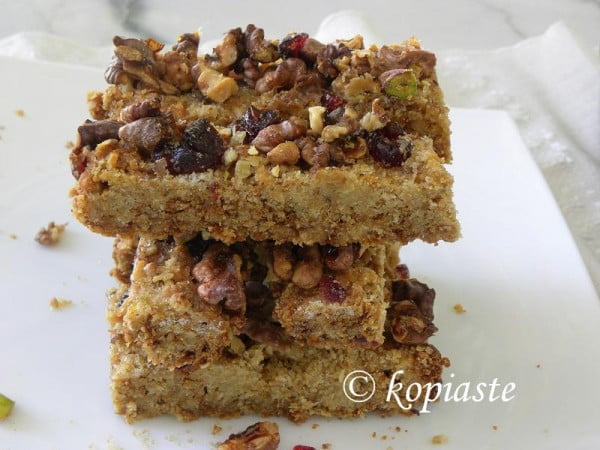 Halvas (pl. halvades), is a simple Lenten dessert with semolina. You can find this dessert in many cultures but in Greece we make it vegan using olive oil, in which we toast semolina and then add a sugar syrup as the sweetener. I made the basic recipe which I divided in two parts. One was made with strawberry coulis and the other I used leftover ingredients I had in my pantry. 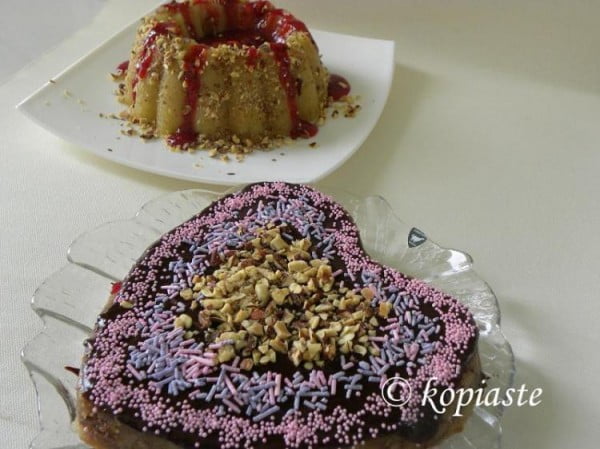 Tahinopita, is one of the most popular desserts I have posted and it is included in my cookbook. I have made this Lenten Dessert using apart from tahini, which is its main ingredient, store bought halvas, orange zest and orange juice. 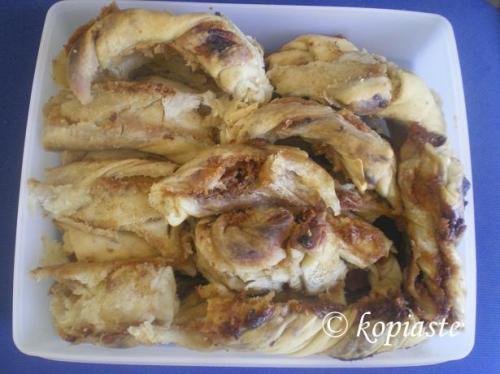 Caramelized Rice Pudding: Having just a few ingredients in my pantry I improvised and made a luscious pudding using rice flour and two kinds of canned milk (evaporated and coconut milk), combining two of my favourite desserts: Crème caramel and Kazan Dipi.

Stay tuned for the announcement of the next event of Creative Concoctions, as there will be a giveaway of Greek Extra Virgin Olive Oil, which will be shipped worldwide!

The giveaway which I have announced at the beginning of the event is still on, so those participating in the Olive Oil events will also be eligible to the other giveaway as well.

Such amazing recipes. Mouth is watering.

Some really creative and delicious dessert ideas! Thanks, Ivy, for taking time to do the round-up. My recent post Chicken Rice with Black Fungus- Parmesan and Cherry Radish Leaves

Such lovely dessert creations here, would love to be able to sample a bit of each!

Now I'm craving dessert for breakfast! These all look great. I really wish I could grab one of your olive oil honey oatmeal bars! My recent post Smoked Salmon Waffles

Such a nice roundup! I'm only happy for the delay otherwise I wouldn't have had enough time :)