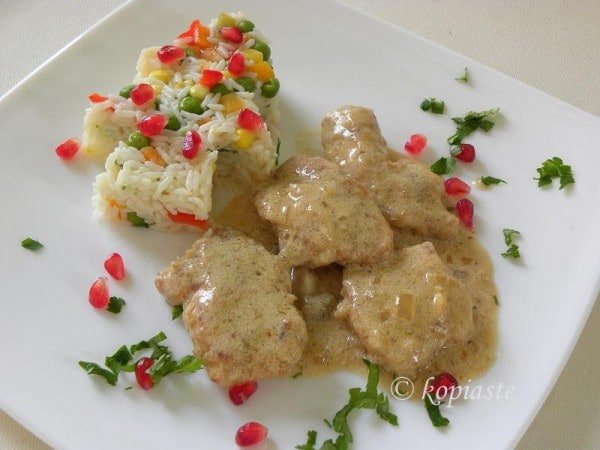 As I said in the previous post, I was hoping that on Sunday I would have leftovers so as not to cook but since there was nothing left I decided to cook an easy chicken recipe.

My son came from Portsmouth last week, where he is studying and a couple of months ago, he had a menu from a restaurant which makes deliveries and was asking me what Tikka Massala is as he had never tried it and didn’t know what to order.  I had heard of this recipe many times and told him that it was a spicy chicken recipe but that was as much as I knew.     Later on I google searched it and decided to cook it for the family.  Although I liked the recipes I read, I had to make a few tweaks of my own so that the remaining family will eat it as well.

I used to think that this was an authentic Indian recipe (please read the comment by Soma, who is Indian) but reading in Wikipedia it’s roots are disputed.   An expert on street food declared that the dish originated in Punjab during the last 50 years whereas another view is that it originated in the first Indian restaurants in Soho, London, during the 1970s to suit the British taste.  The word masala is the spice mix.  See how to make your own Garam Masala here.

This  aromatic and piquant chicken is delicious and  I would also make it with pork or turkey, as the marinade helps the spices penetrate and aromatize the meet and of course the yoghurt makes it very tender.

I served it with Basmati rice and to make it even more festive I added some vegetables in the rice and molded it in a silicon Christmas tree mold.  The vegetables were supposed to be the Christmas decorations 🙂 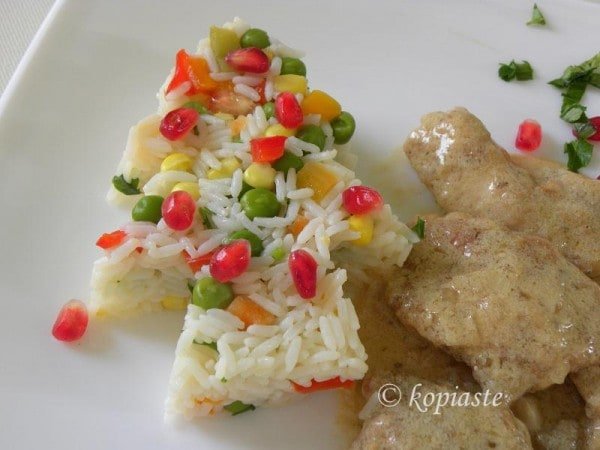 I told my son over skype, as we talk almost every day, that I had made it and he made me promise to make it when he would come for the holidays, so I kept my promise. 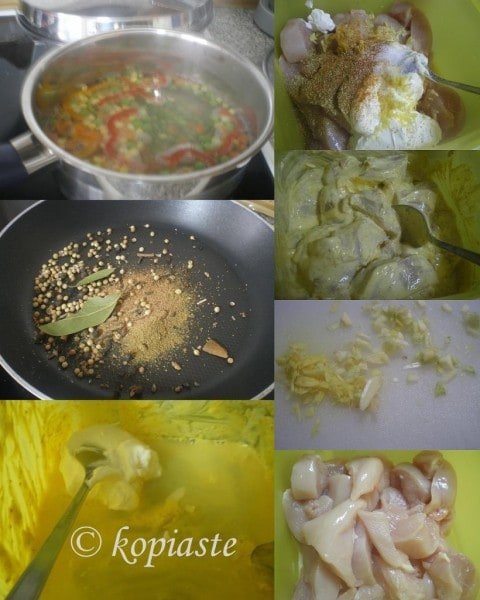 To Make your own garam massala

Makes: about 4 tbsp of Spice Powder

Roast all the above spices, in a non stick frying pan, lightly on low-flame for about 2 minutes. Now grind them in a spice grinder until powdered or use a pestle and mortar.    Store the leftover in an airtight container in a cool, dry place.

Wash and marinate the chicken for at least 2 hours.   Preheat over at 180oC/ 350oF.  Line a baking tin with parchment paper and bake chicken for about 30 minutes.

Simultaneous make the sauce and pilaf.

Heat the olive oil and sauté the onion with the salt until translucent.  Add the remaining yoghurt in the bowl and dilute with the water.   Add wine to onion, then add the yoghurt, the tomato purée, and garam massala.   Mix on low heat for about 30 minutes.  Dilute the flour with the milk and add to the sauce.  Mix until it thickens.  Add the cooked chicken in the sauce and mix for 2 minutes.

Boil the frozen vegetables and peppers in water for 20 minutes until soft.  Drain and set aside.

Heat the water and boil the rice for 15 minutes in salted water.   Drain and mix in the vegetables, half of the pomegranate seeds, the parsely and butter and mix.

Serve on top of rice with the remaining pomegranate seeds, parsley and freshly ground black pepper.

I love this dish. It is so easy to make and delichous. Thank you for the share. :-)

I love to Eat Yummy food

Mmmm...I love tikka masala, and I adore your festive tree! I like to make my own spice blends, so I am always looking for more to try. I just have to remember to write it down so maybe I could post more. It looks Indian to me too. If Britain does clam it as their national dish...we all know where it came from! :D My recent post Poppy Seed Pinwheel Cookies

What ever way you tweaked it looks beautiful. There is nothing "british" about Chicken Tikka masala:-) Just the name would say that. Tikka in Hindi is Morsels/bites and masala as the entire world knows is the spice sauce/mix. Britain is now claiming the tikka masala as they national dish, which is like a joke for us Indians!

I agree with you Soma. It is like a joke because everything about it is Indian and I am glad that you clarified this.