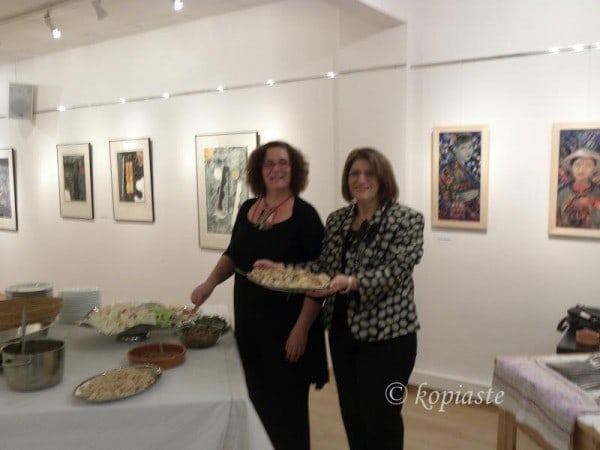 I love ancient Greek history and in a lot of my posts you will find references relating to the history behind the recipe so when I got the invitation from Mariana, I did not hestitate for a moment to attend.  I was lucky enough to be chosen by Foodbuzz for the 24, 24, 24 project so this gave me an opportunity to make a small research of my own and learn more about anciet Greek history. 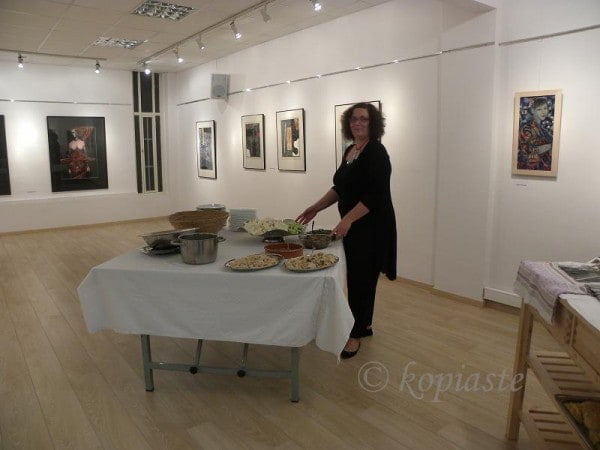 The symposium took place at “Evmaros” which is a cultural association based in Ambelokipi, in Athens and there, on the third floor, occupying a 190 square meters total floor area there are two operating rooms. The one is to organize various events or theatrical performances and the other for exhibitions.

The dinner, which draws its inspiration from the dinners of the Hellenistic period, is the first in a series of dinners in a project under the overall theme Edible History and Edible Stories.

Through archaeology and history they are recreating the ingredients and baking techniques for certain recipes, documented in archaeological findings and philosophical text.  Some of the food such as bread, cheese, flour, were prepared by Marianna in accordance with these techniques, through experimental archeology using cooking utensils made of clay etc). 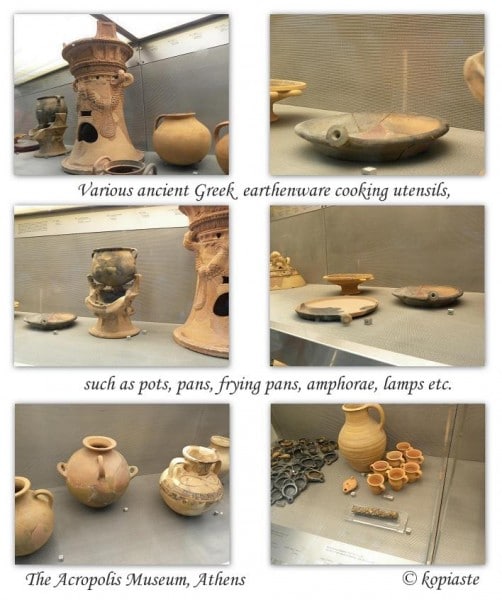 In this post you will hear words unknown to you like hydromelon, oxymeli, plakountas, gastris, garos (fish sauce) etc., all ancient Greek words, some unknown to me as well, but I shall try and describe what I have learned at this Symposium.

Marianna who was the host of this event, explained to us what we were about to eat and the history behind each food.   I have recorded Marianna in a video.  My readers who know Greek they can see the video here and for the remaining of you, I shall try and give you an overall idea of what Mariana has said.

Marianna tells us that the meal she has prepared is intended to retrieve flavors of the Hellenistic period. It is a meal of the rich people.   During the Hellenistic years we see enormous changes in their eating habits.  The quests of Alexander the Great widened the horizons of the Greeks, making the endless conflicts between the cities a steady emigration to the New Greek empires in the east.  The boundaries of East and West with the conquests of Alexander the Great were open and new raw materials and methods were exchanged from east to west and vice versa.   We also have a large influx of money by the Macedonians. Returning to Greece they lived in luxury and this affected all the neighbouring states. The Ancient Greek cuisine was characterized by its frugality, which was founded on the triad “Wheat, olive oil and wine”.  After the return of the Macedonians, the Athenians imitated and surpassed the Macedonians. 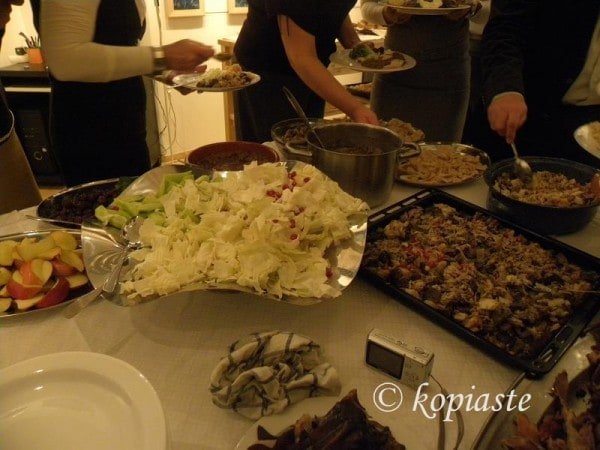 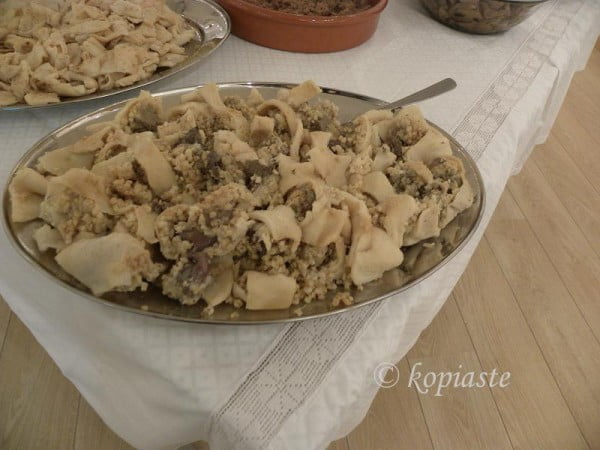 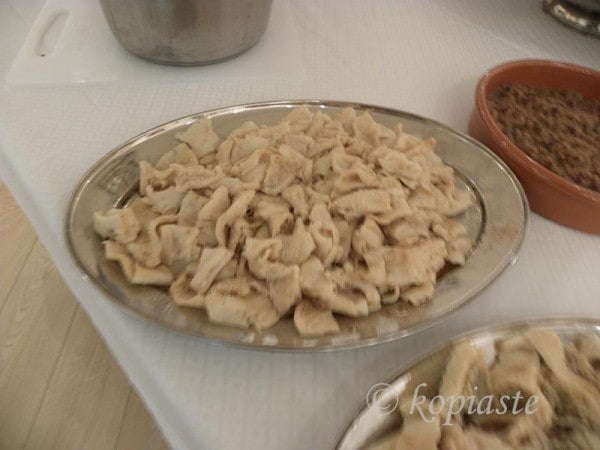 Tripe is one of the few food I do not eat.   I’ve tried tripe when I was younger and didn’t like it.   I thought that now that I am older I should give it another try but unfortunately my opinion did not change. 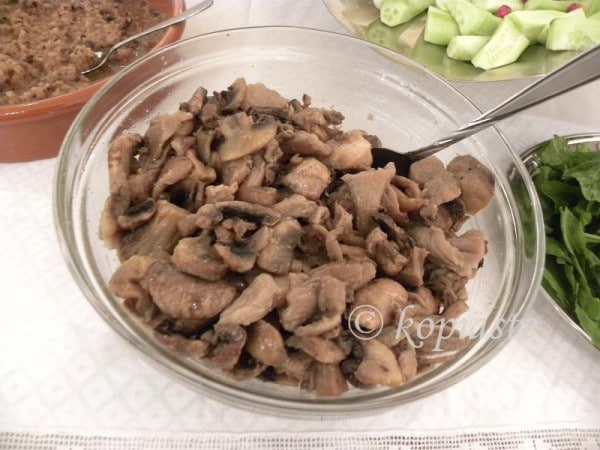 Mushrooms with oxymeli (mixture of vinegar and honey) 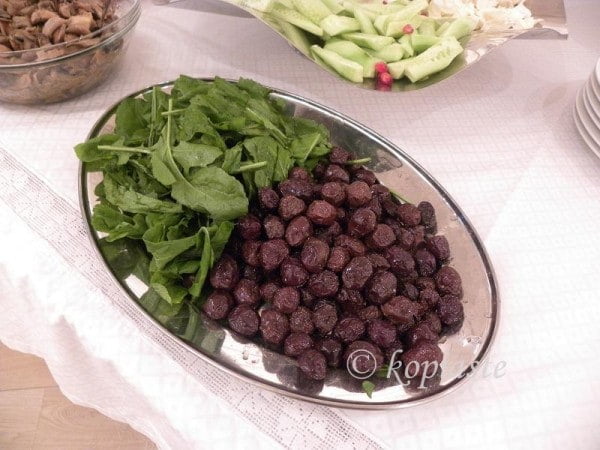 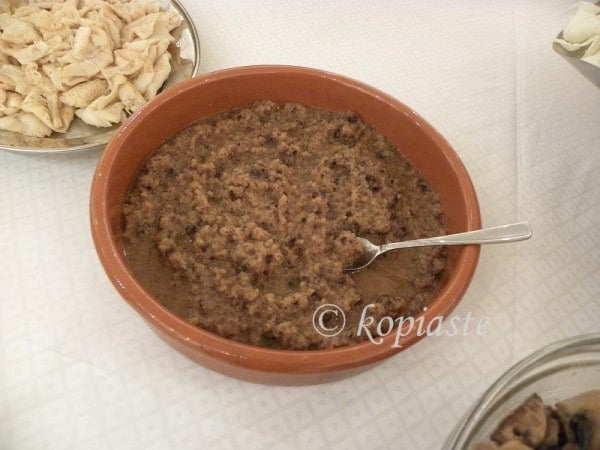 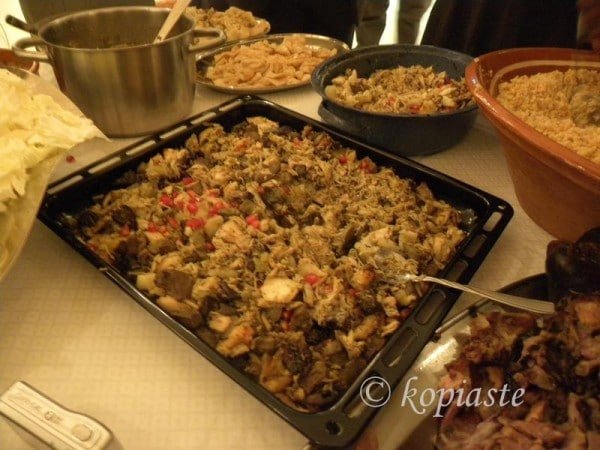 “Myma”, a luxurious meat dish from 1st century b.C., made with chopped chicken meat, liver, offals and flavoured by melted cheese and 13 kinds of herbs and spices.

Myma, was prepared after an animal being sacrificed by the Macedonians. The carcass was lamb or pig or hen and after the sacrifice it was served to those who participated at the sacrifice. The meat was seasoned with 13 spices, herbs and grilled cheese. A spice used in this dish was silphium,  (the root of a hard aromatic resinous gum), the predecessor of asafoetida (Ferula assafoetida), was the most expensive spice in ancient times. In the early years of the Romans silphiun imported from Karchidona disappears from the market and was later imported from Persia.

Asafoetida has a pungent, unpleasant smell when raw, that’s why the Hindus call it the devil’s dung but if it is properly used, in cooked dishes, it delivers a smooth flavor, reminiscent of garlic and leeks.

I had never tried asafoetida before but it was a lovely experience to try it and I loved the taste it gave to the food. 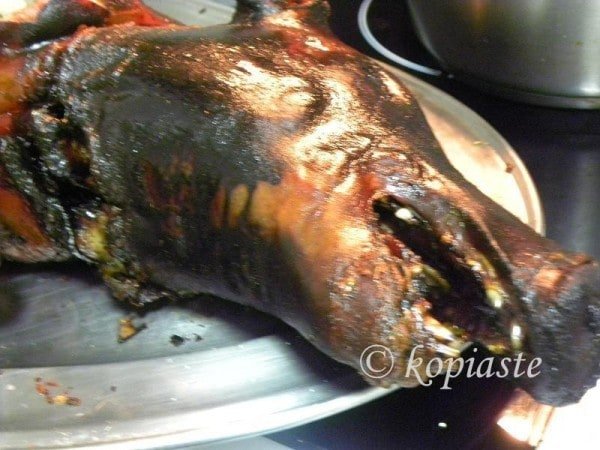 The first stuffed pig was documented for the first time by one of the 20 guests at the luxurious wedding dinner of Karanos 300 b.C., in  Macedonia.   The guest mentions that they ate in golden plates and the food eaten during the dinner were new to them and enjoyed for the very first time.

The stuffed suckling pig is the forerunner of the notorious stuffed meat dishes enjoyed by the Romans later on. 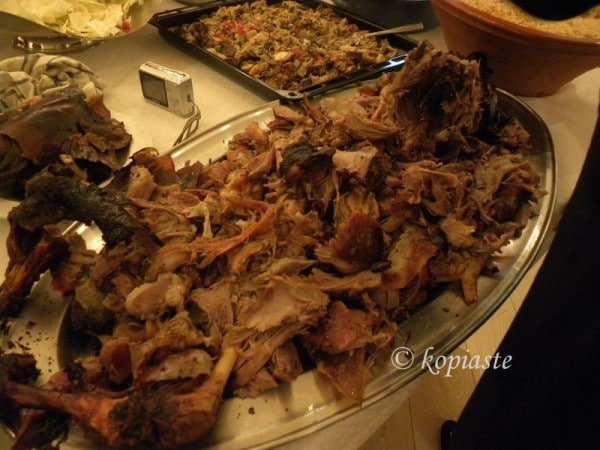 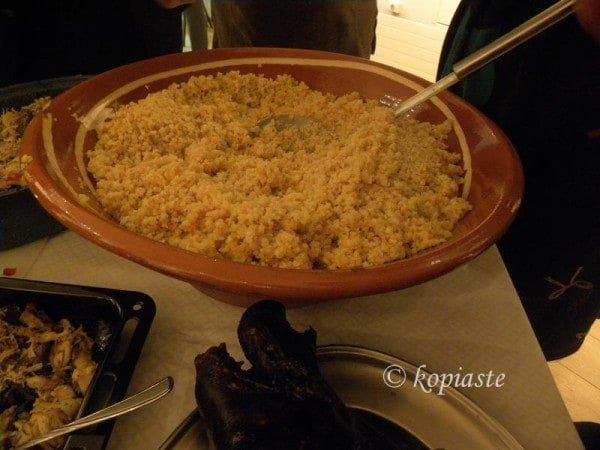 During the Hellenistic period, salads are not as we know them today.  Those appeared in the 19th century.   Cultivated vegetables or  wild greens were served with fruit like apples, watermelons, melons, pomegranate, etc., together on the plate. 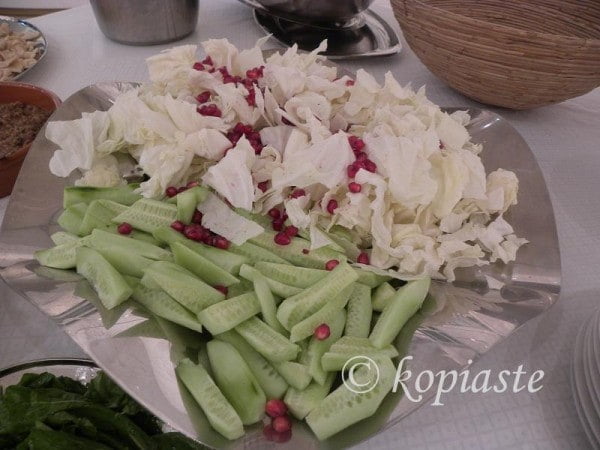 This way of cooking continued until the Byzantine era and the lentils dish reminded me of the lentils dish we cook in Cyprus called fakhes moudjentra, similar to the Arab mujaddara but without the rice and browned onions. 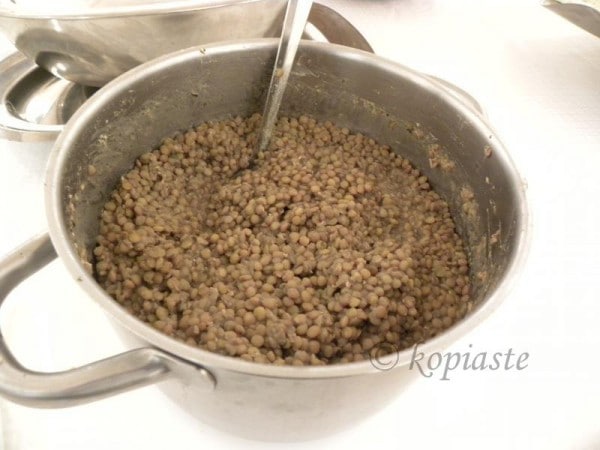 “To many modern people it may seem surprising that Athenians  enjoyed about 66 kinds of bread and cakes, with more or less interesting names as regards ways of baking, shape of bread, ingredients and origin. A variety of breads were made for some religious festivity and to be offered to some particural divinity as well.”    Bread is a large chapter to discuss here but you may read more about bread and how it was prepared here. 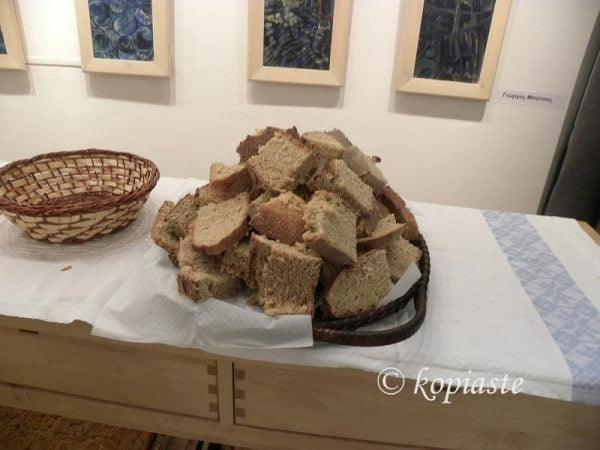 Breads milled with ancient varieties of wheat and baked in a sort of “clivanos” (ancient Greek portable domed clay oven) and gastra a clay pot.

Flat bread from Cappadocia and voletinos bread milled with emmer flour (triticum dicoccum) and sprinkled with poppy seeds. Grape must is used instead of sourdough in voletinos.

During this period, famous cooks and bakers from Lydia and Cappadocia (Asia Minor which was Greek until the 15th century) come to work in the courts of the Hellenistic world, because they have a great reputation. 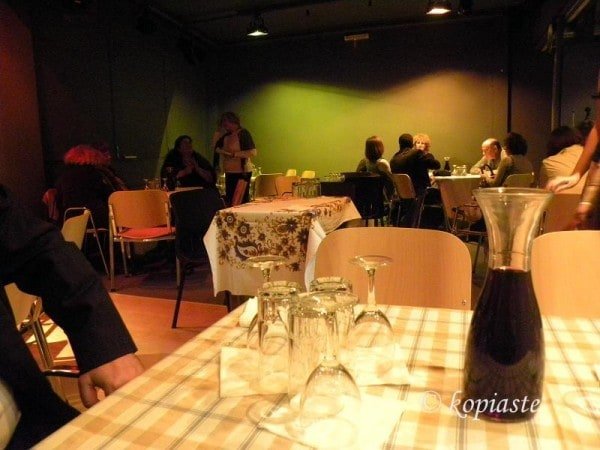 Wine which at that period used to be served together with water, is now served undiluted and taken before dinner.  The wine served at the symposium was red and white wine from one of the few wineries still existing in Messogeia. 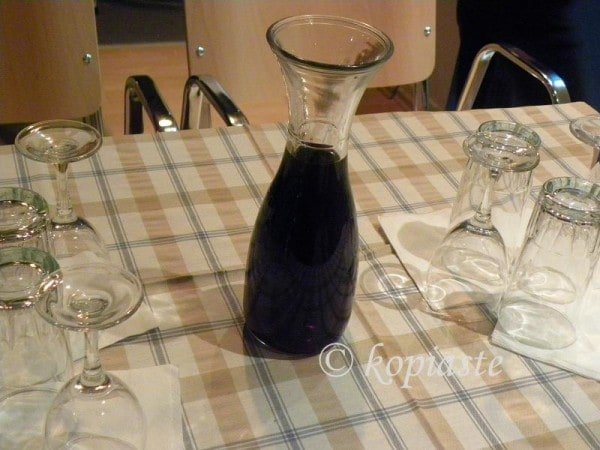 Athens being one of the most import cities of the ancient world, lies in the middle of the Attica basin.  Ancient cities in Attica are also  Marathon, Rafina, Nea Makri, Brauron, Thorikos, Agios Kosmas, Eleusis, Menidi, Markopoulo, Aphidnae and Spata.    Spata on the eastern part of Attica is where Athens International Airport,  Elephtherios Venizelos was built.  The eastern part of Attica, together with other districts, also called Mesogeia, until recent years, (before the airport was constructed) was famous for its wine, where a lot of wineries were found in the region. 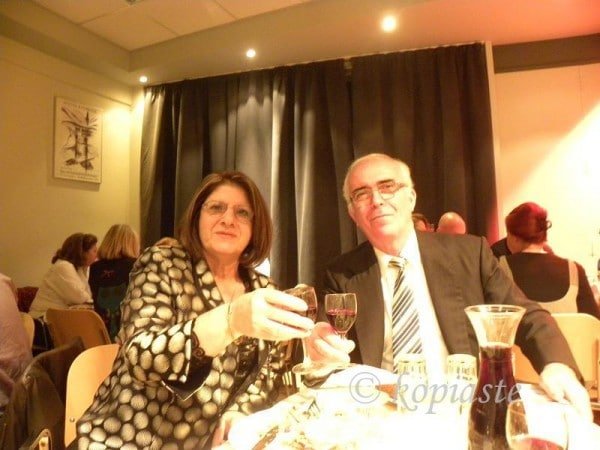 Generally there is an eccentricity at the tables of the ancient Greeks which was later followed by the Romans.    Thrushes and quails were displayed as an appetizer, main dish but also bathed in honey were served as dessert. 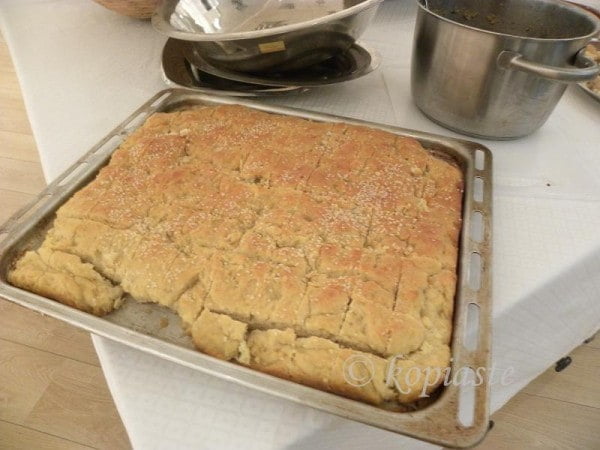 A bread- cake made with fine flour, homemade goat cheese and honey. 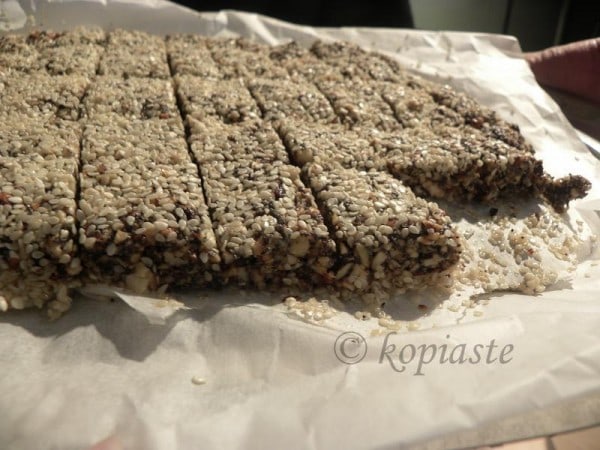 Gastris: a Cretan specialty made with various nuts, sesame seeds and pepper from Crete.

It resembles and tastes like pastelli (a sesame honey candy) but it’s not the same.  I loved the black pepper in it. 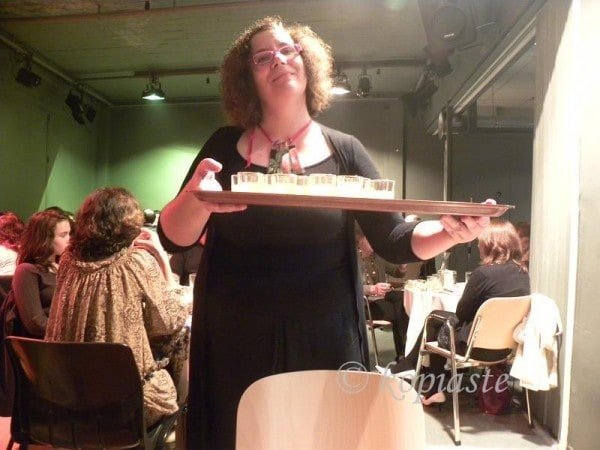 A refreshing fremented drink made of sweet juice from quinces, honey and water. 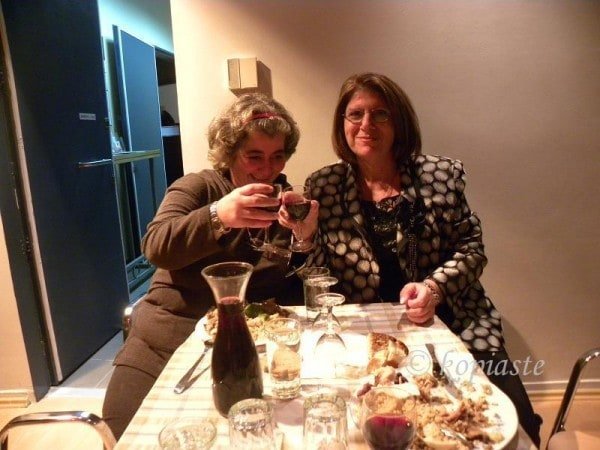 Had a great time and met interesting people.  Constantina, is another blogger I met there.  She blogs in Greek and although she is not a food blogger she shares her views and opinions on a lot of interesting matters. 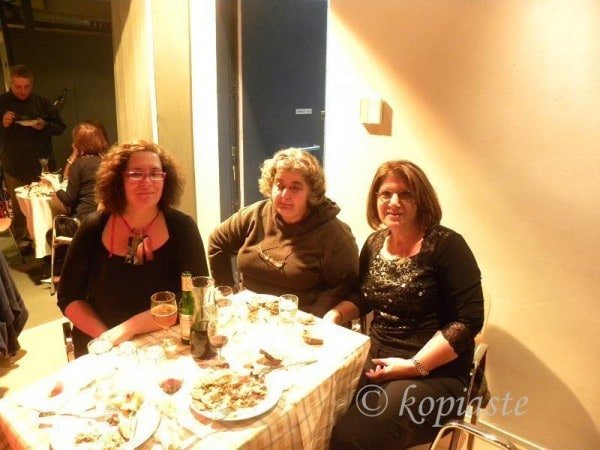 All the food were delicious and it was an amazing taste experience: dishes with  a flavour of food and history, mixed together with ancient ingredients and cooked with old techniques.

Greek food is fantastic. I wish I was there!!

The roasted pig looks absolutely awesome, and filled with chicken breasts sounds just like temptation itself! I wish I had been there! My recent post Greek Lamb Chops Recipe

This must have been such an interesting evening for you. I'd love to do something like that. Can you recommend any good books on food history? Fascinating! And most of the food looks great - although like you, I don't understand why people enjoy tripe! :) My recent post Photographing The Greek Island of Meis - Kastellorizo

Unfortunately I am not aware of any. You can contact my friend Marianna who is an expert on this. You will find the link to her blog in this post.