The museum was built in order to house every artifact found on the rock and on its feet, covering a large period of time, from the Greek Bronze Age to Roman and Byzantine Greece but lies also on the site of Makrygianni, ruins of a part of Roman and early Byzantine Athens. 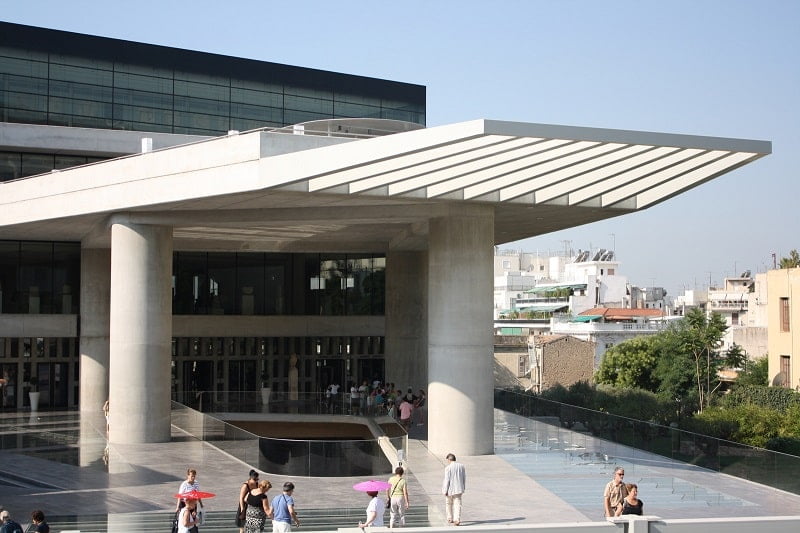 The design by Bernard Tschumi was selected as the winning project in the fourth competition. Tschumi’s design revolves around three concepts: light, movement, and a tectonic and programmatic element. 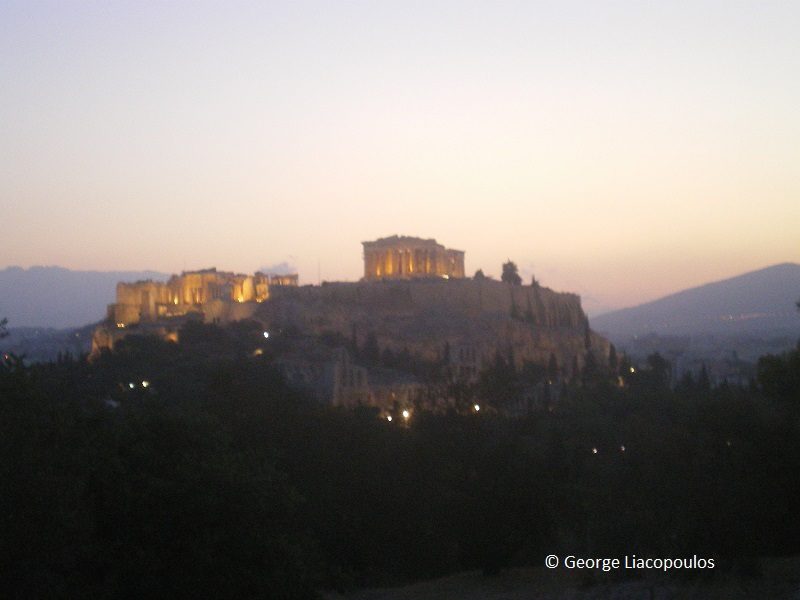 The Acropolis, view from Philopappou

The museum was founded in 2003 while the Organisation of the Museum was estabilished in 2008. Finally, it opened to public on June 21, 2009. Nearly 4,000 objects are exhibited over an area of 14,000 square metres.  It is easily accessible by the Metro, Acropolis Station. 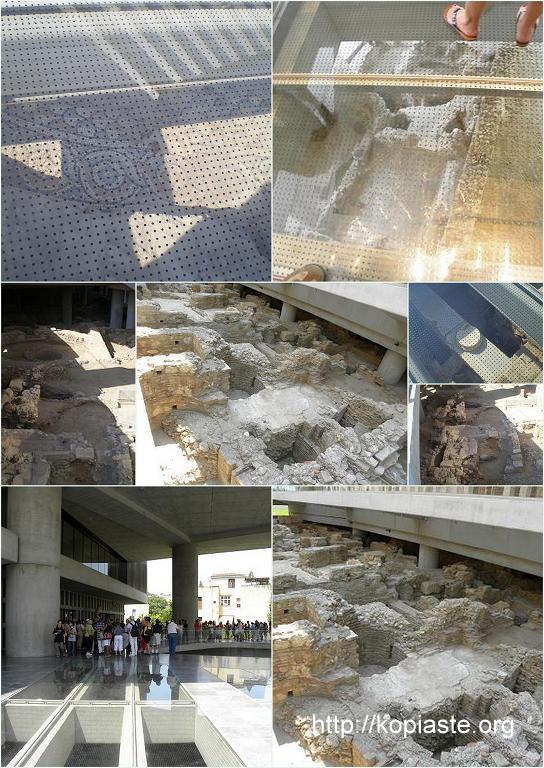 The monuments of the Acropolis have withstood the ravages of past centuries, both of ancient times and those of the Middle Ages. Until the 17th century, foreign travelers visiting the monuments depicted the classical buildings as being intact.

This remained the case until the middle of the same century, when the Propylaia was blown up while being used as a gunpowder store (this is the side visible from the Museum). Thirty years later, the Ottoman occupiers dismantled the neighbouring Temple of Athena Nike to use its materials to strengthen the fortification of the Acropolis. The most fatal year, however, for the Acropolis, was 1687, when many of the building’s architectural members were blown into the air and fell in heaps around the Hill of the Acropolis, caused by a bomb from the Venetian forces. Foreign visitors to the Acropolis would search through the rubble and take fragments of the fallen sculptures as their souvenirs. It was in the 19th century that Thomas Bruce, 7th Earl of Elgin, the British ambassador to the Ottoman Empire from 1799–1803, had obtained a controversial permission from the Ottoman authorities to remove pieces from the Acropolis. From 1801 to 1812. Elgin’s agents removed about half of the surviving sculptures of the Parthenon, as well as architectural members and sculpture from the Propylaea and Erechtheum. 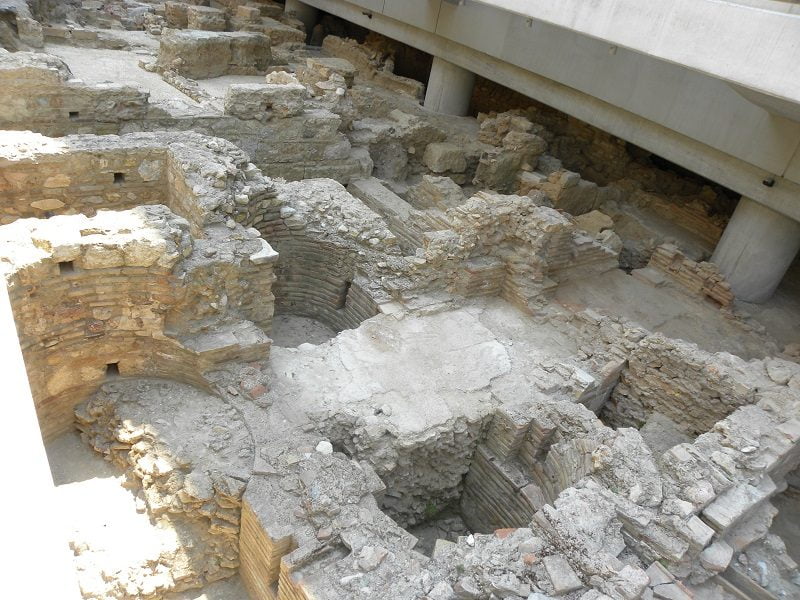 The base of the museum design ‘hovers’ over the existing archaeological excavations on pilotis.

This level contains the entrance lobby as well as temporary exhibition spaces, retail space, and all support facilities. The continuing excavation underneath is visible through large expanses of glass flooring. 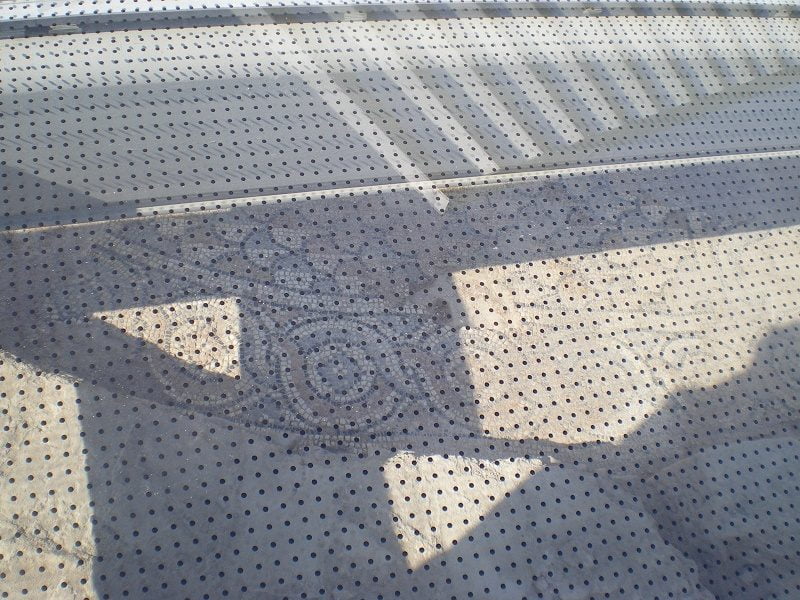 The food was cooked on hearths, in ovens and portable braziers and escharae, which were also used for heating their houses.

The middle level is a large, double-height, trapezoidal hall that accommodates all galleries from the Archaic period to the Roman Empire. 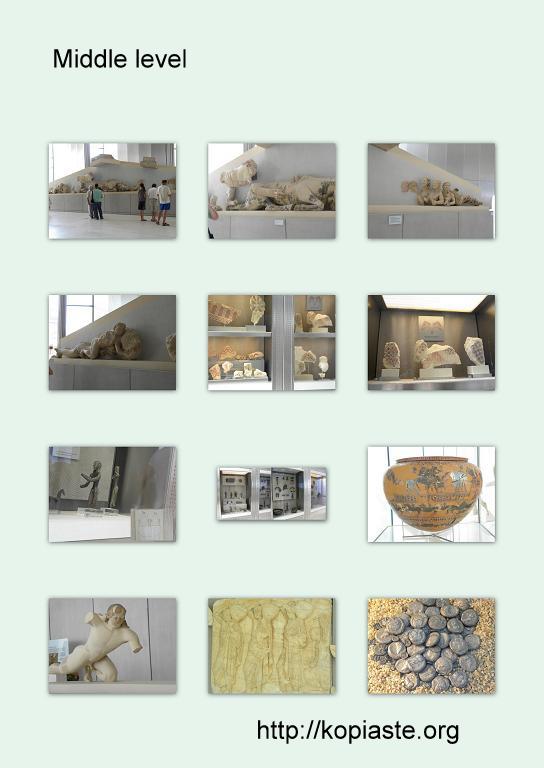 The Middle level includes a bar and restaurant with views toward the Acropolis and a multimedia auditorium, in Greek and in English and is so worth watching it.

In the restaurant unfortunately only cold plates, salads and sandwiches are served and as much as I would love to eat a salad, the rest of the family wanted to eat something more substantial, so we had a cup of coffee and went to Monastiraki to eat.  I loved the restaurant as each table had a pot with a different herb:  oregano, thyme, mint, basil, rosemary, sage etc. 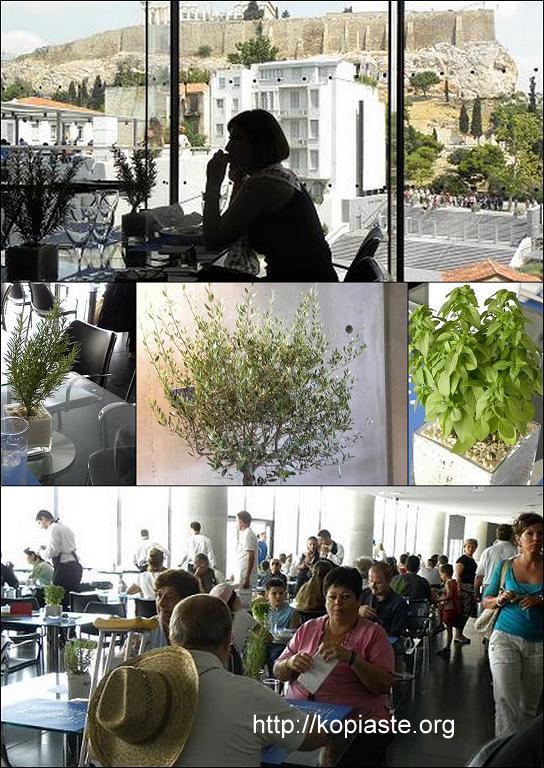 Panoramic, double-glazed glass walls surround the gallery completely and provide advanced climate
control as well as unparalleled views, from the Parthenon to the Saronic Gulf.

On your right you can see the Lycabettus Hill and on your left is  Philopappou Hill.    I have more pictures and a description of most of them in flickr. 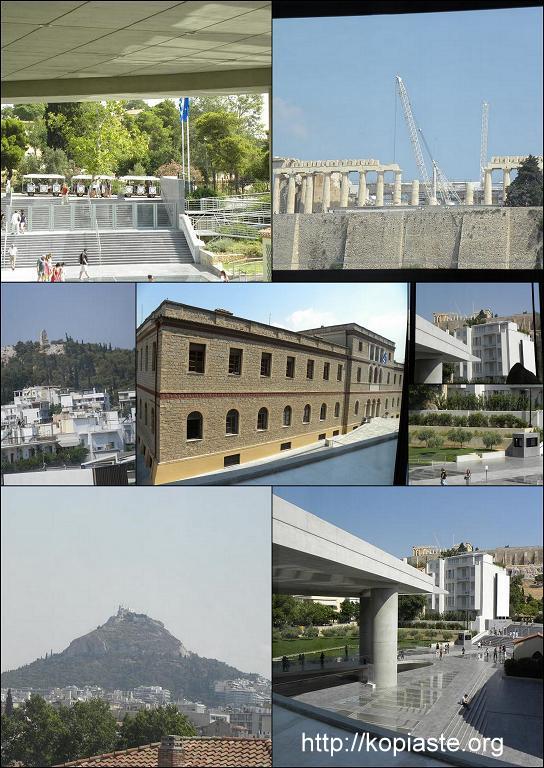 The top level comprises the rectangular Parthenon Gallery arranged around an indoor court. This level is rotated with respect to the remainder of the building, matching the exact orientation of the Parthenon and assuring that the sculptures are lighted at the same angles as if they were set in their original places. 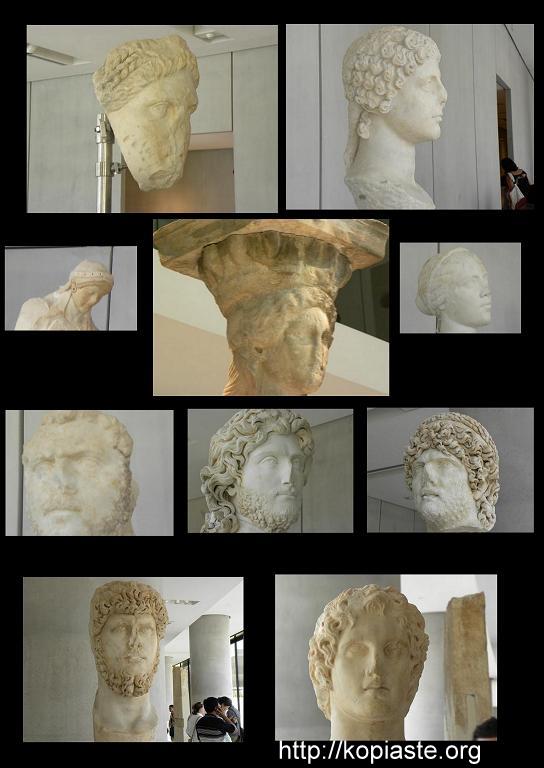 Metopes:   Their design is attributed to the sculptor Kalamis. The metopes of the east side of the Parthenon, above the main entrance, depict the Gigantomachy (mythical battles between the Olympian gods and the Giants). The metopes of the west end show Amazonomachy (mythical battle of the Athenians against the Amazons). The metopes of the south side—with the exception of the somewhat problematic metopes 13–20, now lost—show the Thessalian Centauromachy (battle of the Lapiths aided by Theseus against the half-man, half-horse Centaurs). On the north side of the Parthenon the metopes are poorly preserved, but the subject seems to be the sack of Troy. 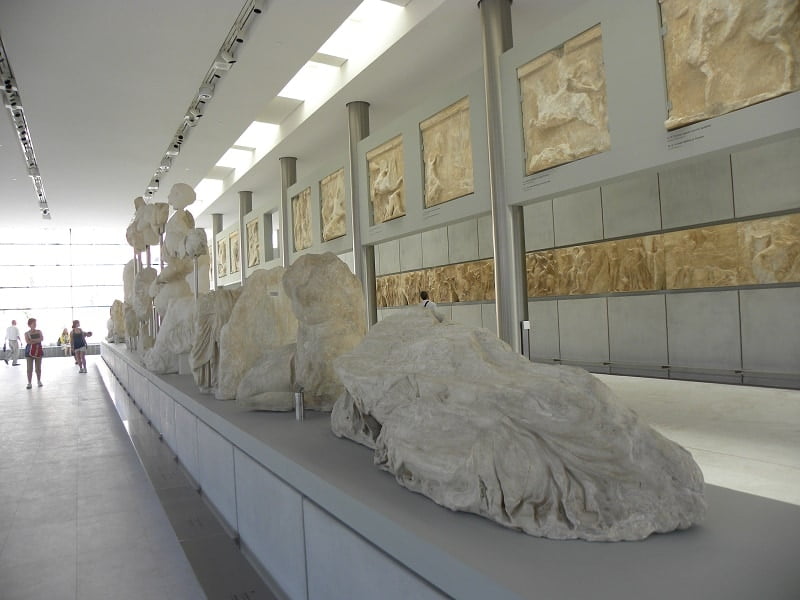 The 2nd-century traveller Pausanias, when he visited the Acropolis at the end of the second century AD , only mentioned briefly the sculptures of the pediments (gable ends) of the temple, reserving the majority of his description for the gold and ivory statue of the goddess inside.

Part of the East pediment is still found on the Parthenon.

The East pediment narrates the birth of Athena from the head of her father, Zeus. According to Greek mythology

I hope that you have enjoyed this virtual tour I have prepared for you.  On Friday when we visited the Museum I had the pleasure to meet one of the readers of Kopiaste.  Nicholas and his family came from Toronto and he e-mailed me that they would be visiting the Museum.  They had booked the tour just before of us so we met at the entrance.  Hopefully, we shall meet when they return to Athens on their way back to Canada.  I take this opportunity to thank all my readers who send me private e-mails.

Finally enjoy a slide show with the Parthenon Marbles.  All pictures have been taken with my new camera which arrived the evening before the visit to the Museum and the only thing I had time to do was to charge the battery!  All pictures were taken with natural light and no flash on.  None of the pictures has been tempered.

The New Acropolis Museum is now a reality and we only hope that the missing sculptures will soon return to their home place where they belong.

The Guardian had set a voting for the return of the Marbles and the vote showed that 95% were fore their return.    The results of the poll will be published on the 8th of July issue of the Guardian. 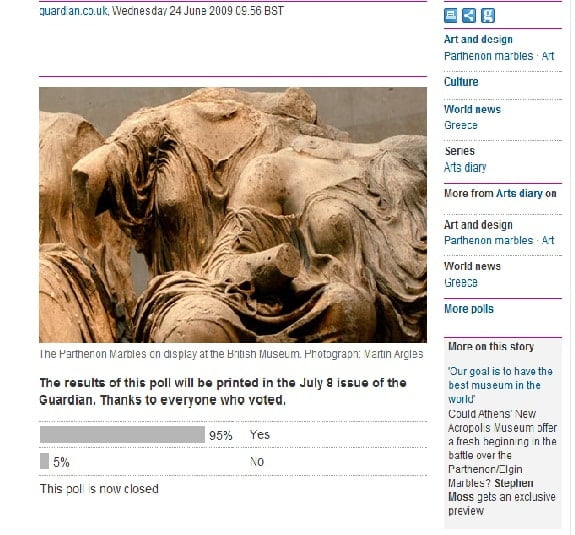 Great information, This site has lot of useful information and it is informative for people who cannot visit Athens. Thanks for the wonderful post.

Great post. Many and complexity details in your article. If only I could visit Athens!

Great post. Thanks for giving the images of inside the museum. Thanks for sharing the information.

Thanks for letting us travel the world without leaving our homes :)

I found this is an informative and interesting post so i think so it is very useful and knowledgeable. I would like to thank you for the efforts you have made in writing this article. I am hoping the same best work from you in the future as well.