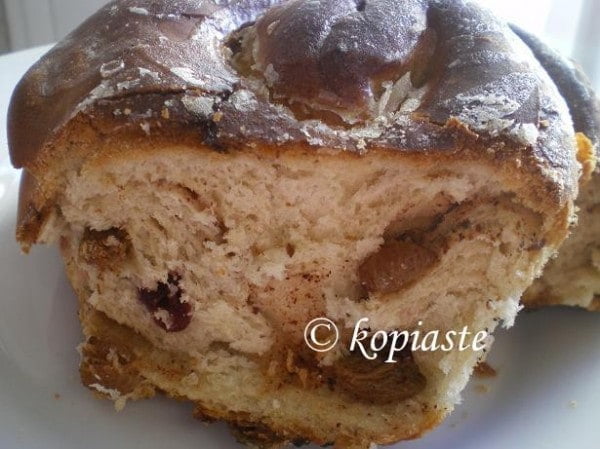 Kifylla is another Cypriot street food which is not widely known.   It’s a sweet bread, filled with raisins and glazed with sugar on top and it used to be sold in the central streets,  in wheeled carts.  It’s a very healthy snack and perfect for breakfast.

Being away from Cyprus for so many years, nearly thirty, I had forgotten all about them.  Although I visit Cyprus every now and then, I never saw them anywhere.  When my sister visited me recently we remembered them and although she never made them herself she promised to find the recipe and give it to me, which she did.  The recipe however was to feed an army and I had to adjust it.  The only thing that I changed was to use orange juice in the glazing instead of water.

I cannot describe the wonderful aromas coming from the kitchen.  The whole house filled with the sweet aroma of bread and cinnamon and sweet memories of the past.   I just had to taste one as soon as it was out of the oven, still hot and I was in heaven. 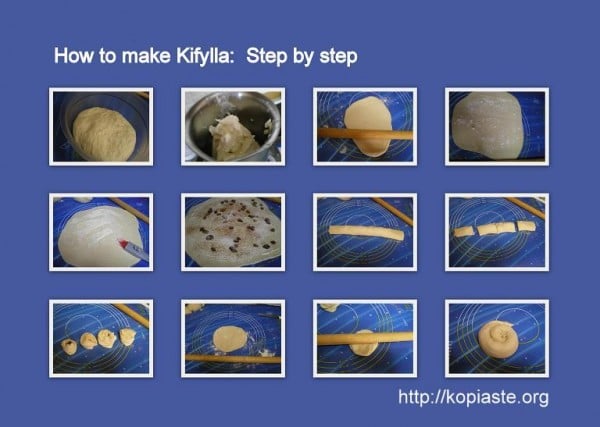 The recipe is included in my cookbook Mint, Cinnamon & Blossom Water, Flavours of Cyprus, Kopiaste as well as in my e-cookbook.

Ivy, where I can find full version of recipe?I would like to prepare it?

Elena, all my Cypriot recipes are included in my cookbook.

Christos Anesti Happy Easter Ivy, we are both Orthodox your bread is very delicious... I did it once and lost the recipe thanks for sharing... I will try yours soon.

I made them, teleia! They'll become a staple:)

Hi Ivy, Just to let you know, I made these yesterday..... delicious!! I added a few more currants (fave). Could you tell me which 'cup' size you are using? Is it US? I have to convert everything. I'll try to add a photo on my blog later, if there's any left!! Husband loved them.

Ivy, These look even better than the ones I just made with raisins. Love the orange flavored icing on top.