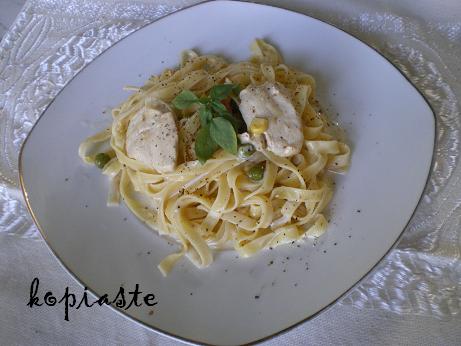 I had not planned what to cook today and was not really in a mood of cooking anything complicated.  I had thawed some chicken breasts from the evening and by the time I finished this morning’s post it was almost noon.    I decided to make a pasta dish and improvised with what I had in the deep freezer.     I had frozen artichokes but my daughter doesn’t like them, I had frozen peppers but I use them all the time in pasta dishes so when I saw the frozen vegetables and grated cheese I  liked the idea.   I also had an opened heavy creamed in the refrigerator which I wanted to use, so I decided to combine them.   The only pasta I had in my closet was spaghetti and tagliatelle and  I preferred the tagliatelle but I regret that I added only half the packet as I thought that it would be more than enough.  It came out to be very delicious and although it the picture the peas, corn and carrots are not visible as they landed on the bottom of the plate, they were delicious and made the dish  quite different from what we usually eat.

Wash and drain the chicken breast. Remove skin and bone, which boil separately. After removing froth with a slotted ladle, add salt and boil for 20 minutes. Remove bones and skin and reserve 1/2 cup of broth.

Boil tagliatelle in the remaining broth for half time of the cooking instructions period.  The packet said 20 minutes so I cooked them for 10 minutes.

In a separate pot, boil vegetables in salty water until soft.

Heat oil in sautéing pan and sauté chicken on both sides. 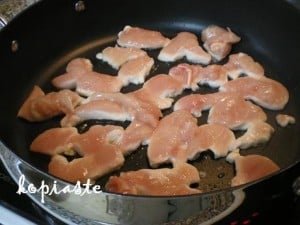 Add onion and garlic and sauté until translucent. Deglaze the pan with wine, scraping up any pieces on the bottom of the pan. Add chicken broth, vegetables, salt and pepper, cover with lid and simmer for ten minutes. 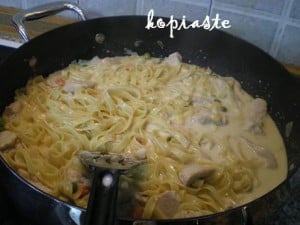 Drain pasta and mix in tagliatelle and finish cooking for another five minutes, mixing until pasta is cooked.

Serve hot and sprinkle some freshly ground pepper on top. 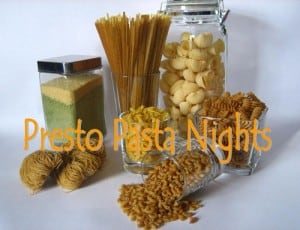 I am submitting this recipe at Foodie Tots, who is hosting this week’s Presto Pasta Nights, created by Ruth, of Once Upon a Feast.

Ivy, if your dish tastes as good as it looks we are all in for a treat.

I do love it when everything just comes together like that. Thanks for sharing with Presto Pasta Nights.

I'm looking forward to your hosting the round up in January. I still can't quite get my head around the fact that 2008 is almost done.

I'm glad I could play a part Ivy. Thanks to u Giz, and Val.

He, he, I do love to play around with Pasta too! Great combo Ivy! I still don't know what I'll eat for lunch today... and it's noon here :D