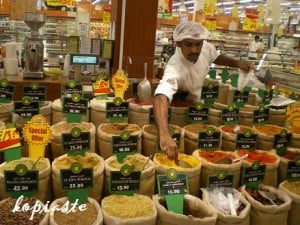 I found about sumac reading various recipes but this is not a spice you can get in your neighbourhod supermarket here in Greece. Perhaps you can find it in large supermarkets or in small shops selling middle eastern products but those are not easy to find.

A few weeks ago, when my son went to Dubai he asked me what I would like from there and the first thing that came to my mind was sumac.

When he visited the town, he went to Carrefour and was amazed with the variety of spices they sold. As he didn’t know exactly what I wanted he bought two kinds of sumac. 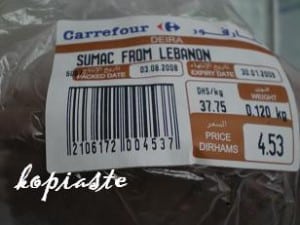 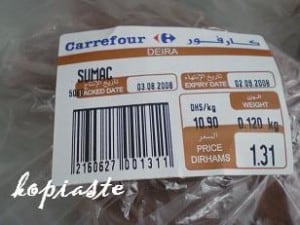 There was a cheap sumac, of which I do not know its origin as it is not stated on the package, as well as a Lebanese sumac, which is three times more expensive than the other one. He didn’t know that I already had turmeric, which I bought a few months back together with garam masssala, from a little shop selling Asian products, so he bought me some turmeric as well.

I didn’t know how sumac tasted and whether it was a hot spice or not but it was not hot. I can’t say that we were thrilled about it but it wasn’t bad either. If you have any recipes using sumac, please let me know as I would like to try it again.

I was eager to try it so I google searched writing chicken and sumac and read a few recipes, some Moroccan, some Lebanese but mainly I wanted to see how much of each spice I should use. I did not follow any specific recipe but I made this recipe using what I liked from those I read.

Wash chicken, remove skin, cut into pieces and marinate for at least 1 hour with all the ingredients. 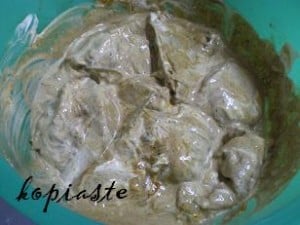 Grill chicken for about 10 minutes on each side. I served this dish with baked eggplants, which I shall post tomorrow. 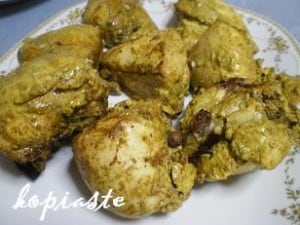 I think it goes well with chicken so I am looking forward to it.

I used Elly's Za'atar recipe, which has sumac in it. I, too, am trying to figure out what else to use it in. I think I cut out a recipe at some point for sumac chicken. I'll have to dig it out.

Thank you Sriekha. Shall visit your bog right now, thank you.

my first visit to ur blog and it is too nice dear! vsit my blog too when u find time!