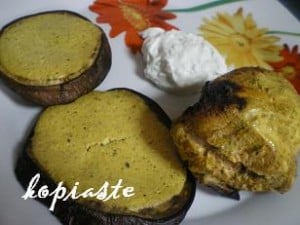 When we went to Sparta I brought along a few things such as pasto and loukaniko, which I hope to be posting about soon, fresh eggs and honey.
My sisters-in-law who live in villages just a few miles away from Sparta, have houses with big gardens with lots of flowers and grow their own vegetables and have some chicken, just as a hobby. They do not sell anything. When leaving they had a bag full of vegetables from their garden which they gave us. 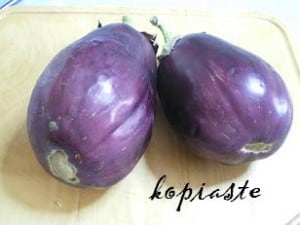 Among other things they gave us some eggplants. I never saw such huge eggplants in my life and I know that my brother in law never uses chemical fertilizers. Believe me they were half a kilo each but although they were huge they were seedless and very tasty. I cooked some yiahni and the last two I used in this dish. 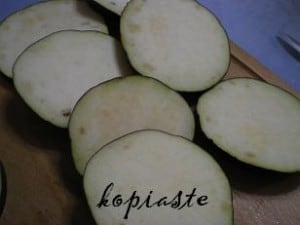 I decided to bake them as a side dish with the Grilled Middle Eastern Chicken.

Although when I began cooking I planned to make them with yoghurt  by the time I started grilling the chicken I changed my mind and decided to use the marinade of the chicken instead.

After washing them, I cut them into 1 cm round slices and placed them in water with salt for ½ an hour. I put a plate on top to keep them in the water and then I drained them.

I preheated the oven at 180 degrees C and baked them for about an hour. I checked them regularly and brushed them with olive oil a couple of times, so that they would not dry.

Meantime, I discarded the bay leaves and some of the allspice berries (I left only two) from the marinade and placed the remaining in a food processor, I added a spoonful of olive oil and processed the mixture very well so that the allspice would dissolve completely. I added the strained Greek yoghurt and processed again, trying it until it tasted good. When I tried it using 3 spoonfuls of yoghurt, the taste was too strong, so I added two more spoonfuls.

Back to the eggplants. I pierced them with the fork and when they were soft I covered each slice of eggplant with a couple of spoonfuls of yoghurt mixture and baked them for another fifteen minutes until the cream had solidified.

I think the next time I shall make them I shall add the marinade-yoghurt mixture on top and bake them only for five minutes so that it is still creamy.    I tested one eggplant the way I wanted to make it originally and that was good as well so I might make them this way again soon. 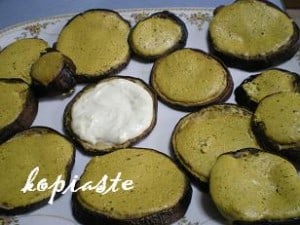 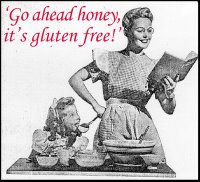 I am submitting this recipe to The Crispy Cook hosting the event Go Ahead Honey, it’s Gluten free.

Since I used eggplants, which were grown by my niece in Sparta, I am also submitting this recipe as an entry to Grow Your Own, which is celebrating the one year anniversary this month! Grow Your Own is sponsored by Andrea’s Recipes, and also hosted by Andrea for the Anniversary edition. Your still have time to send your recipes and celebrate with Andrea. Here is what you have to do to enter.

Thank you for such a beautiful entry in the Go Ahead, Honey, It's Gluten Free Seasonal Vegetables event. I have just posted the roundup.

Thank you Anamika I am glad you liked it.

Hi ivy First of all, thanks you for your comment. This eggplant recipe for "grow you own" cannot have been better than this..well done !

I am glad that you can now post without any trouble. Seems that minor problem solved.

Thanks everybody for your lovely comments.

Hey Sis, I am able to comment on your blog this time around. I hope that you get everything straightened out. It can be so frustrating staring something new. In the meantime your eggplant dish is certainly droolworthy. I haven't purchased any eggplants so far this season at the market...but I will:D