The earth’s shadow swept past the moon late last night turning a shining full moon of August into a dim red one and finally blackening it out of view. 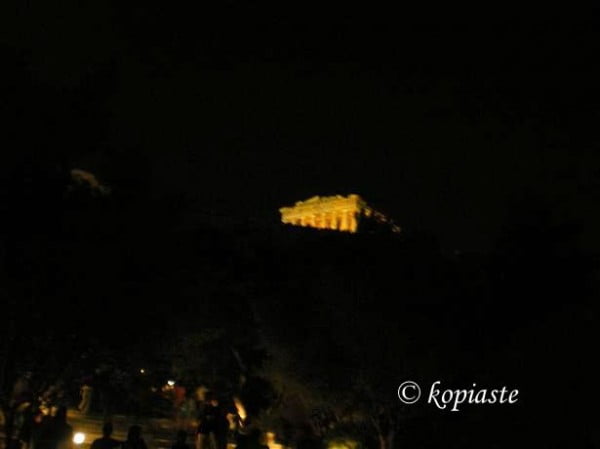 The partial lunar eclipse occurred late in the night in Athens around 10 p.m.At about 9 p.m. my husband asked me if I wanted to go to the Acropolis to see the eclipse and without hesitation we got into the car and were there around 9.30 p.m.We had to park the car in the narrow streets of Plaka somewhere opposite Zappeio and walked our way up to the Acropolis. 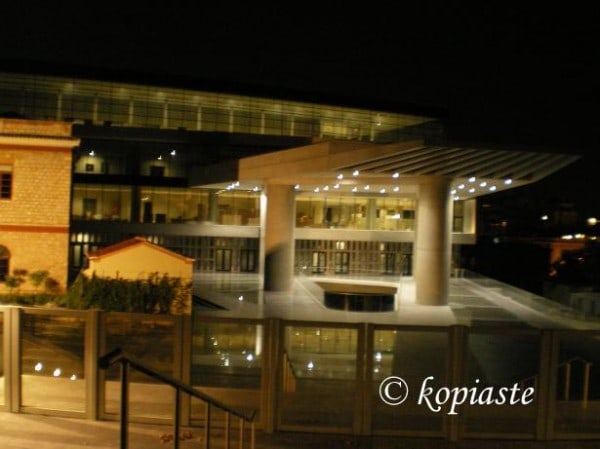 The new museum of the Acropolis

The worse part began after the entrance to the ancient theatre of Herodou tou Attikou.  I couldn’t believe what I saw.I thought that Athens was empty due to summer holidays but the streets were packed with both locals and tourists. I distinguished British American and Australian accents, I heard people speaking Italian, Spanish, French, Russian, Arabic, Cypriot, German and some other I could not recognize.

The queue was about 100 metres x 5 metres and it took about half an hour to pass inside the Acropolis. 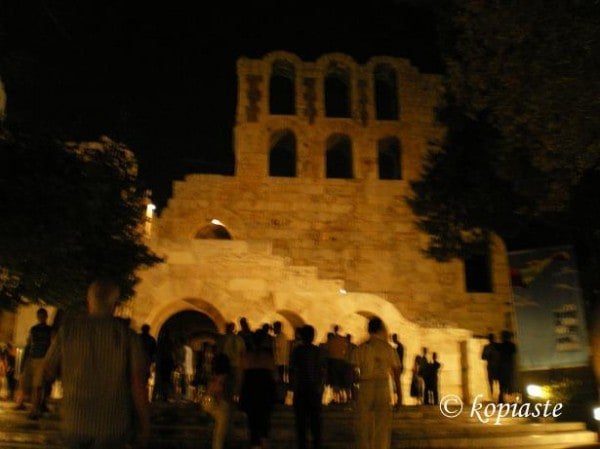 When we arrived the moon was still full and when descending it was half moon but although I took some pictures I did not manage to capture it. 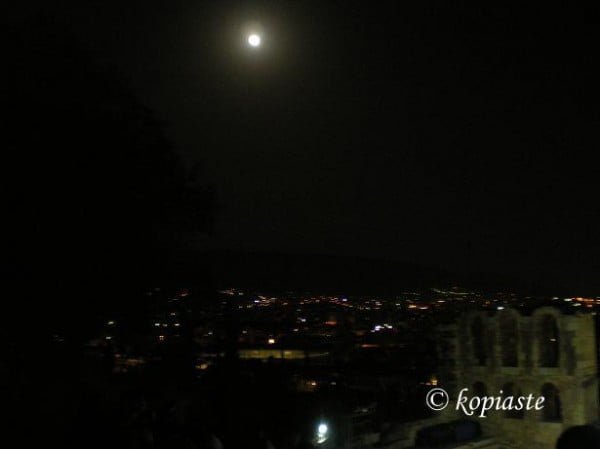 I am sorry about the bad quality of my photos by it was the first time I took photos during night.Although I turned it to night scene I didn’t know much about it and most of my pictures are dim and shaking. 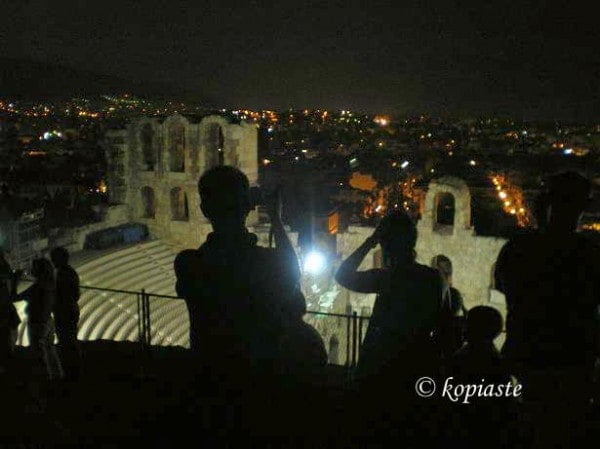 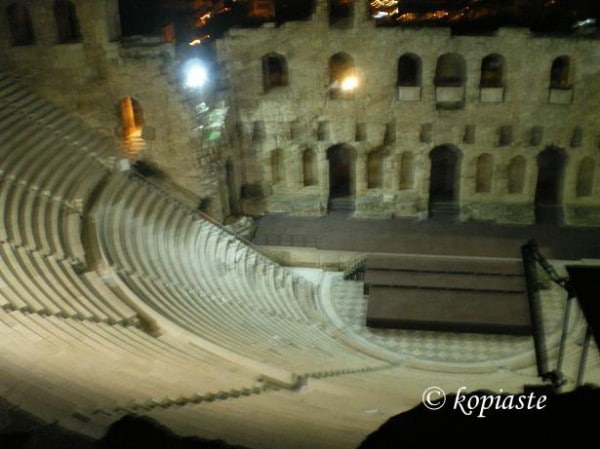 Photo of the Parthenon (Wikipedia) 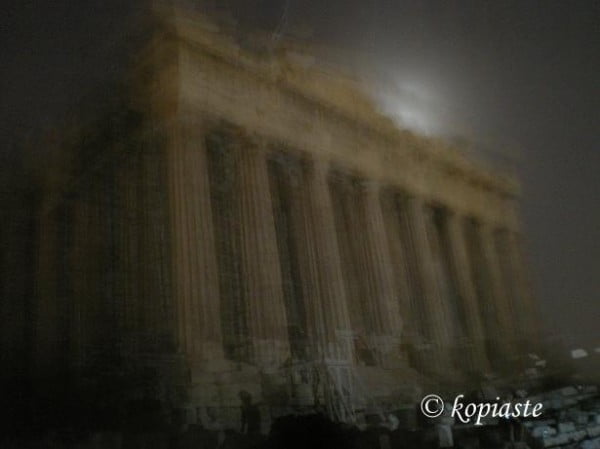 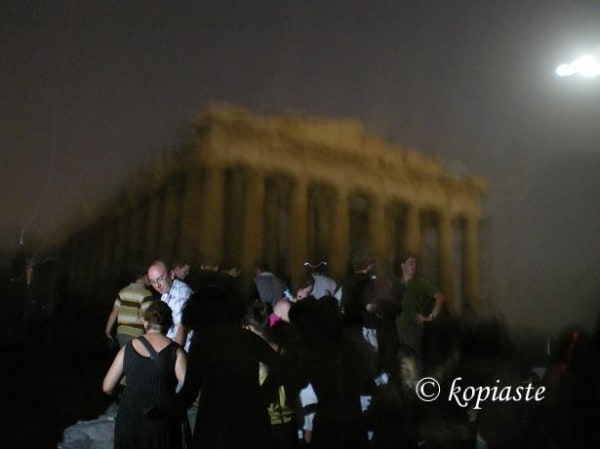 The eclipse has already began.

If you have not visited the Acropolis it’s not easy to capture what an accomplishment this building was to build 400 years b.C. during the rule of Pericles by Iktinos and Kallicratis. The ancient Greek temple known as the Parthenon (Greek for “the virgin’s place” i.e. Athena) was constructed between 447 and 432 b.C. Considered a masterpiece of Greek architecture, it was built atop the Acropolis, a hill overlooking the city of Athens. To give you a small example, each pillar is 1.9 m in diameter and 10.4 m high. If you are near the pilar you realize that three grown ups are needed to embrace it pillar. 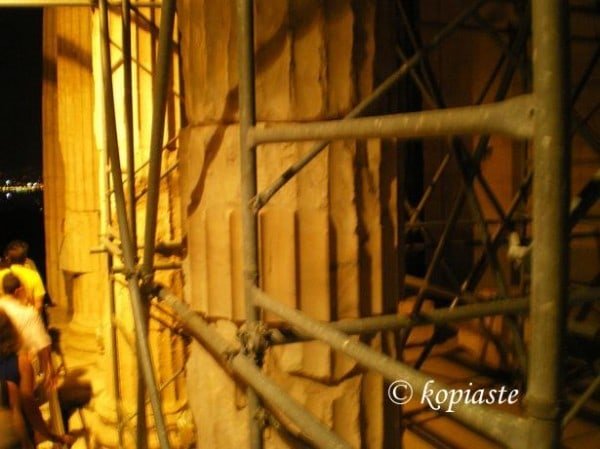 Hope you enjoyed the tour even if the photos are blurry and now to our recipe.

I hope the name did not scare you away. Perka is a fish of the grouper family and marathoriza is fennel bulb aka finocchio.

I chose this recipe as ancient Greeks ate a lot of fish. I prepared the fish with herbs and spices used in Greek cuisine and although it is wrapped in parchment paper, with all due respect to our ancestors, I wouldn’t call it kleftiko, as I have seen it in another blog.

A few weeks ago I went to the farmers’ market and bought this lovely fillet of painted comber aka grouper. When I bought the fish I did not have a recipe in mind but I combined some of the Greek herbs and vegetables I bought and wrapped the fish in parchment paper. When I finished wrapping it I saw that there was still some space left at the four corners, so I quickly unwrapped it and filled in the gaps with mushrooms.

Well there are not enough words to describe the result of this dish. I kept hearing my family saying wow, mmmm, yummy, delicious, fantastic.

I strongly recommend this dish and I am sure that even the most eclectic taste buds will be satisfied. 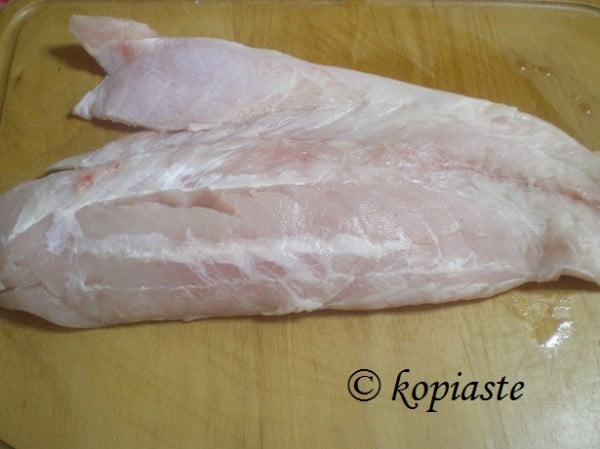 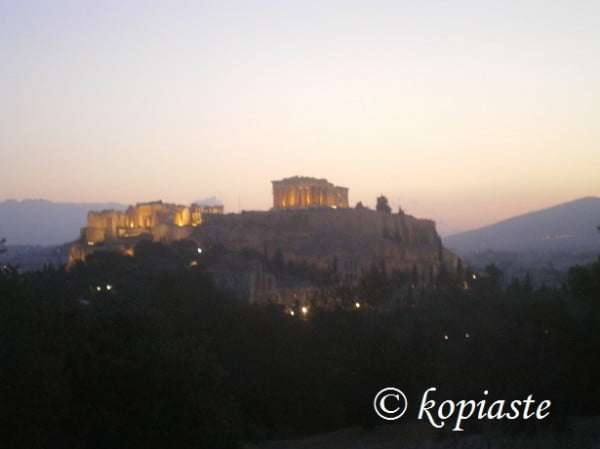 […] the painted comber isn’t a particularly popular food fish. In fact, I could only find one recipe for it, which involved combining it with vegetables and Greek herbs before wrapping it in […]

The Parthenon (ancient Greek: Παρθενών) was a temple of Athena, built in the 5th century BC on the Acropolis of Athens

Thanks Cindy for visiting. I tried to leave a message at your site but was not successful.

This looks delicious, thanks for sharing! I found your site from Jeena's roundup and I will try out this recipe since you found some of my favorite ingredients- fennel and grouper (or grouper style) fish! Thanks! -Cindalou

I loved the read on Acropolis.. The pics are awesome and I remembered my trip there fondly...