Frozen yoghourt (also spelled yoghurt or yogurt) is a frozen dessert made with yoghourt and sometimes other dairy products and natural or artificial flavorings. It is usually more tart than ice cream, as well as being lower in fat (due to the use of milk instead of cream).

This is the best frozen Greek yoghourt I’ve made and it takes less than 15 minutes to prepare.  Before freezing it, it’s an amazing smothie but with the heat wave we are going through, it’s refreshing, nutricious, healthy, guilt free as it has far less calories than an ice cream and perfect for any time of the day to make you feel better.  If you have children, you can easily make it into popsicles.

I’ve been very busy with work and personal stuff lately, my blog being down for a second time in a short while, so it was quite stressful and I need to relax for a while because there are no vacation for us in the cards in the near future.  At least we are lucky that we live in the countryside, not far from the beach, where we can relax a little bit. 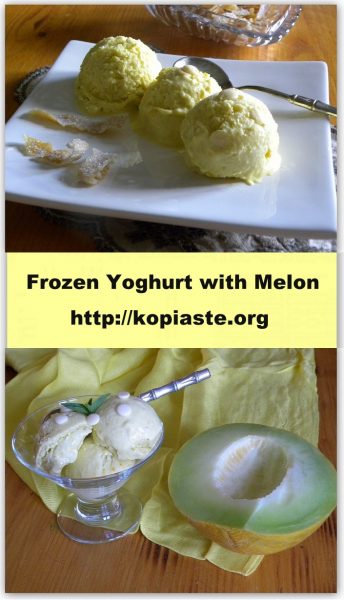 However, I had to find time to post a recipe to celebrate my blog’s ninth anniversary.  I hope I will be able to make it till the 10th year because I feel I am burning out. 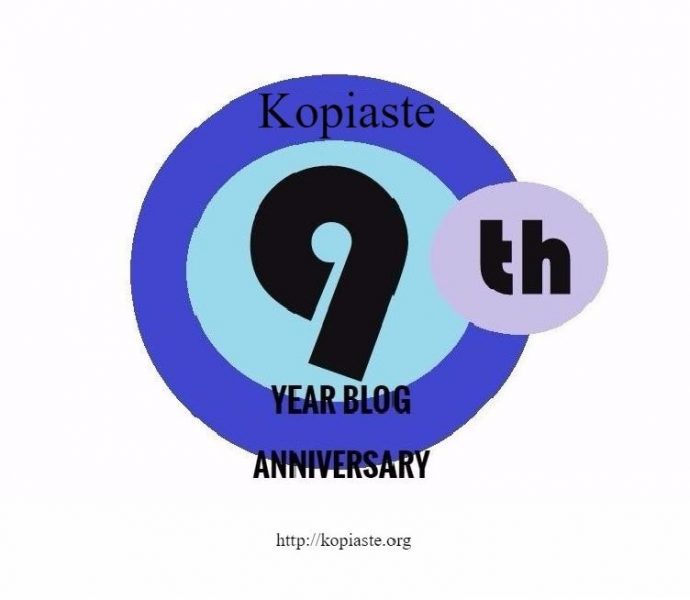 Strained Yoghourt (also written yoghurt or yogurt), or Yiaourti Straggisto, as we call it in Greek, known as Greek Yoghurt abroad, is a staple in each Greek home.  In Greece you can buy it either packed in small containers of 200 ml or buy it by the weight from large containers.

I had a lot of Greek yoghurt I wanted to use as well as two melons, so I wanted to combine these two ingredients and make something with them.

Last week when my daughter visited us, I found some frozen strawberries in the freezer and made a delicious smoothie with Greek yoghurt, milk, icecream and some honey to sweeten it and it was delicious!  That could also become a Frozen Strawberry Yoghurt but we could not resist and drank all of it! 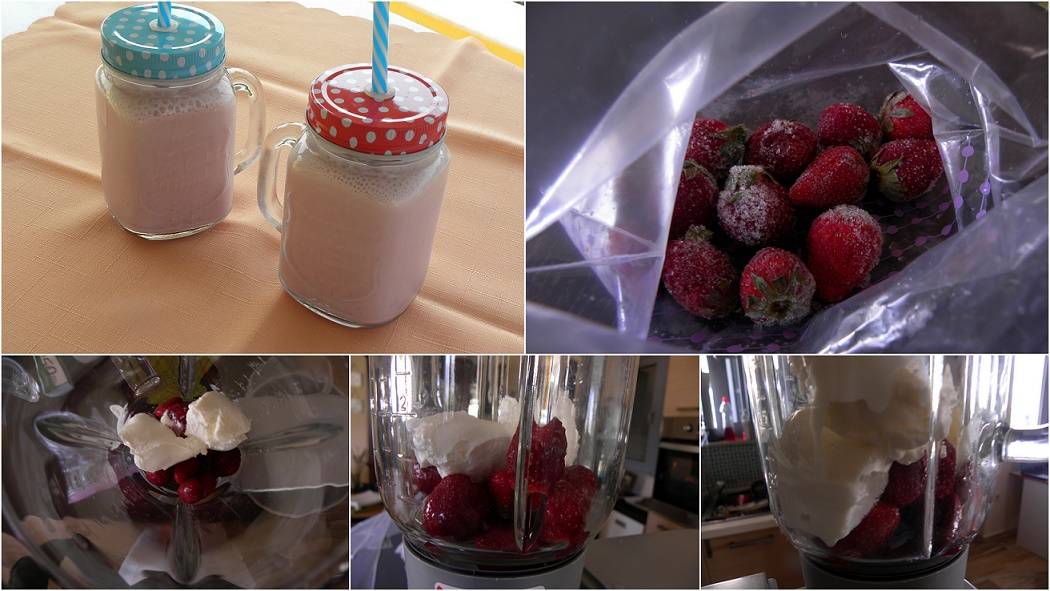 However, as my husband isn’t a fan of smoothies and it was too much to make just for myself, so I decided to make frozen yoghurt instead, which he also likes.

Before starting, I took out some of the ingredients I had at home, which would work well with the recipe.

I was debating whether to sweeten it with icing sugar or honey, or to flavour it with lemon zest or citrus essence or add some of my lemon liqueur.

My choice was to use honey instead of icing sugar and used all three ingredients i.e.  limoncello, lemon zest and citrus essence, as I love the taste of lemon. However, if you don’t like lemon, you can add vanilla or any other flavour you like. 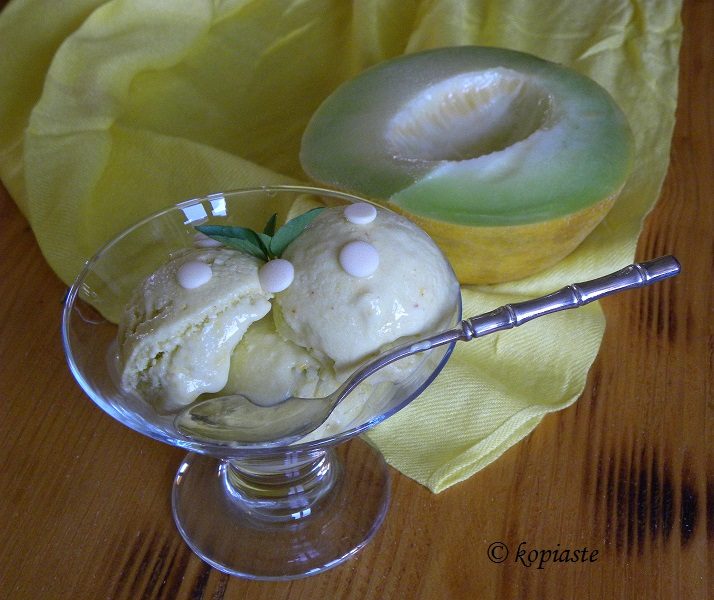 If you are making it for children and do not wish to use any alcohol, just leave it out.  As I’ve written in my cookbook “More Than A Greek Salad“, for a similar recipe with peaches:  “Although some people suggest adding a couple tablespoons vodka to prevent it from crystallizing, I have tried this and it doesn’t work. Perhaps the vodka has other agendas!”

However it does add to the taste, but if you intend to leave it out, add more icing sugar or honey, as liqueurs are sweet. You can taste and adjust the sweetness as you go along but personally I don’t like too sweet desserts.

Regarding  the heavy cream, I just added it because I had some lefover from another recipe, otherwise you can skip it if you like, but cream does make just about anything better!  Doesn’t it?

In the picture with the ingredients you do not see the saffron, as it was a last minute decision.  As the flesh of  Galia melons is a very pale yellow one, the final result came out very pale beige.  I do not like using artificial colouring but I was lucky to have both saffron and turmeric at home, which both work well to add colour.  My choice was, of course, Greek saffron (Krokos Kozanis) which is one of  the best in the world and apart from colour it adds an amazing taste as well!

When you mix it in, it won’t colour it immediately but as you can see the colour slowly develops.  If you don’t mix it you will have lovely yellow specks in it!

If you have an ice cream machine you can churn it but since I don’t, I put it in a container with a lid and after two hours, I mixed it a couple of times to break the ice crystals.

Wao recipe. It should be very delicious. I must try at home. Thanks for sharing such a great tutorial.

That looks heavenly! Did you mean 0.25g (not 25g) saffron? Happy Anniversary! I look forward to more wonderful creations from you, Ivy.

Wow, thanks Angie. You are so right. Correcting it immediately.

Such a heavenly treat! Refreshing and divine.