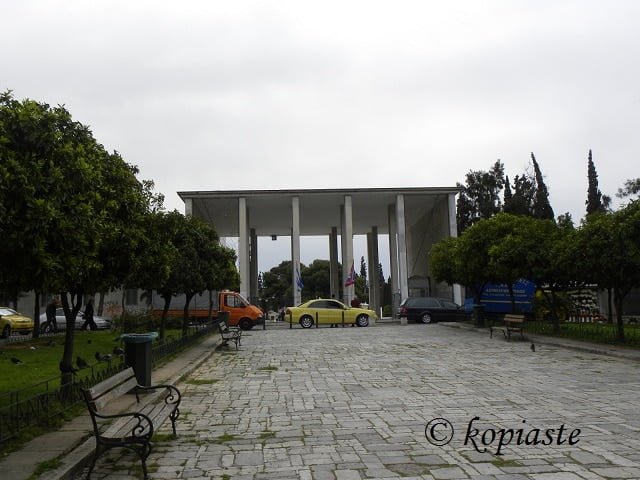 We visted the First Cemetery of Athens last Monday, on the 25th March, which is a public holiday.  Although living in Athens for so many years we had never visited it before although we knew that it has some of the most beautiful nineteenth and twentieth century Greek sculpture.

The cemetery is under the Municipality of Athens and it is declared as an historical monument.

It was the first cemetery to be built after the independence and of course at the time it was in the outskirts of Athens.  It opened in 1837 and soon became a luxurious cemetery for famous Greek people and foreigners.  As such, it is adorned by works by some of the best sculptors of Greece.

Since then it is the burial place of Greek Prime Ministers, Presidents Archbishops, Heroes of the Greek revolution, benefactors, actors, filmmakers, archaeologists, singers, poets, writers and other  prominent Athenians.

Although we visited for about three hours we only managed to explore around one third of the cemetery. 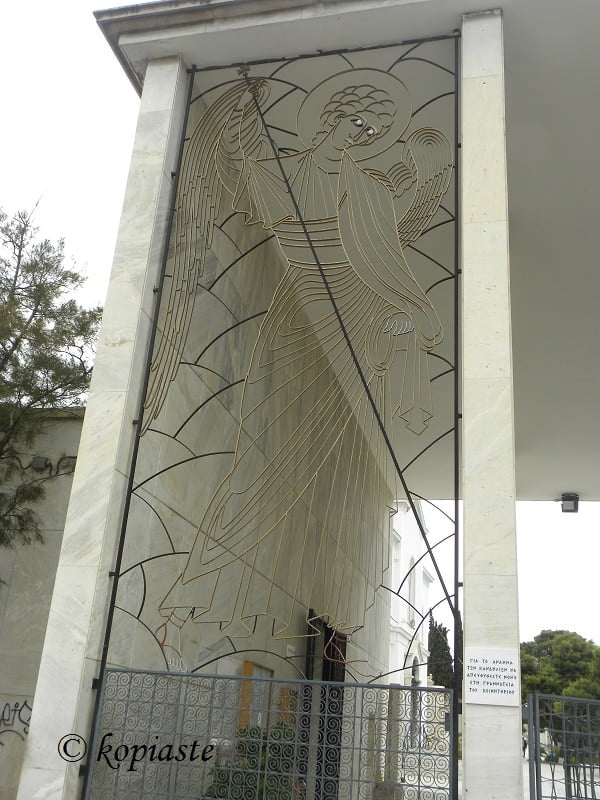 Entrance of the cemetery.

The cemetery is located behind the Temple of Olympian Zeus and the Panathinaiko Stadium in central Athens. It can be found at the top end of Anapafseos Street (Eternal Rest Street). It is large green space including pines and cypresses. In the cemetery there are three churches. The main is the Church of Saint Theodore and there is also a smaller of Saint Lazarus. The third church is a Catholic church. 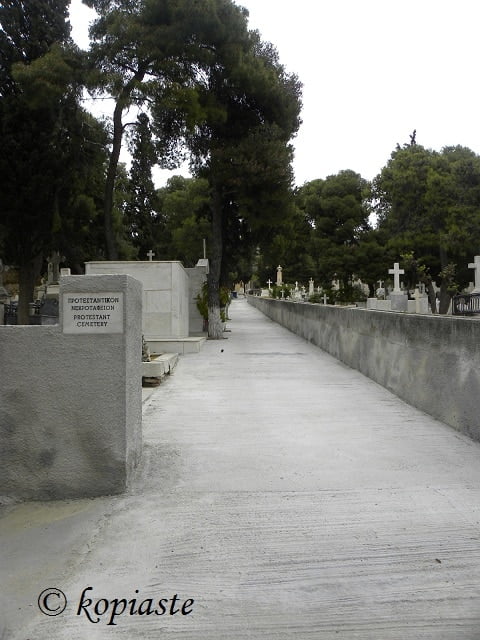 There are also separate places for Protestants and Jews. 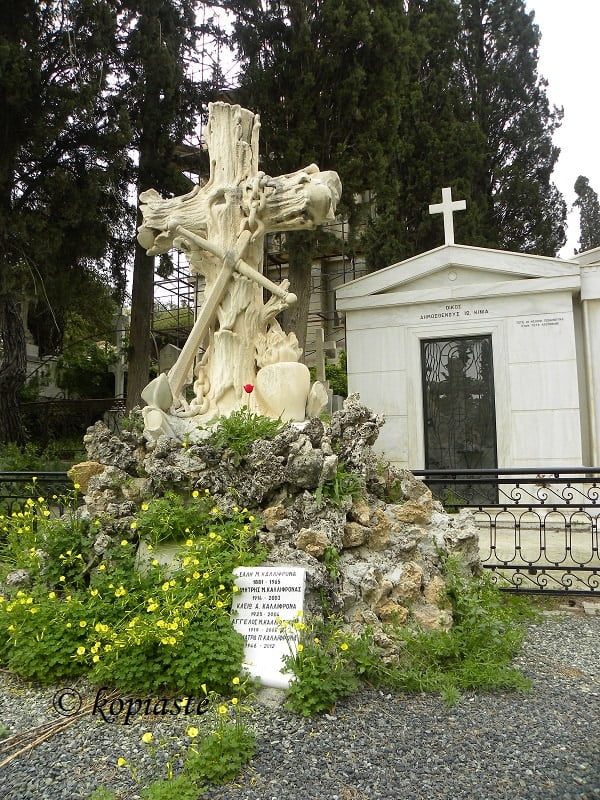 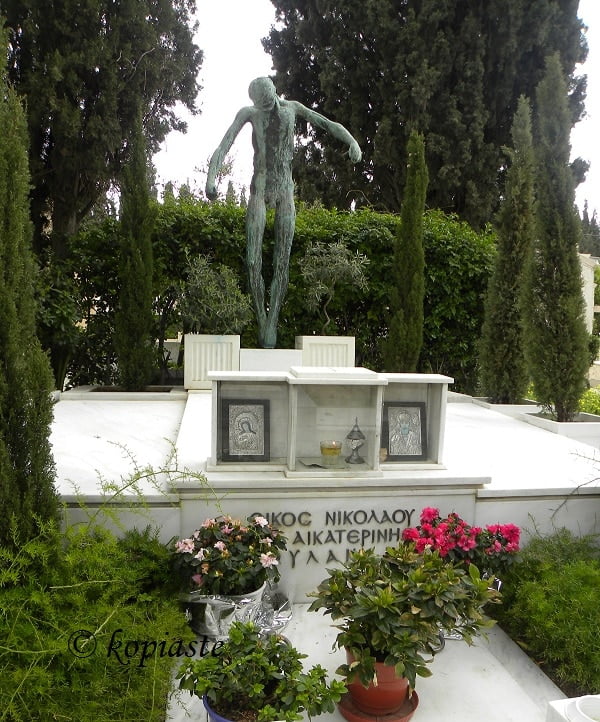 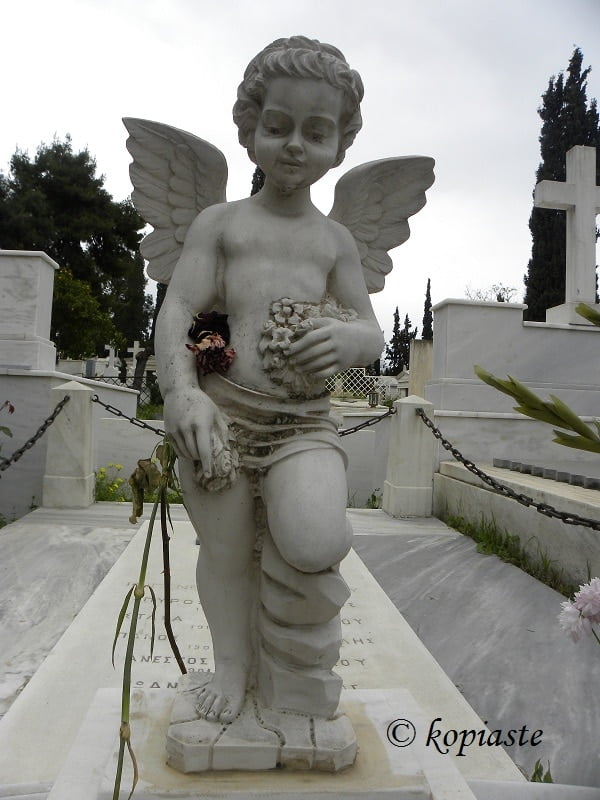 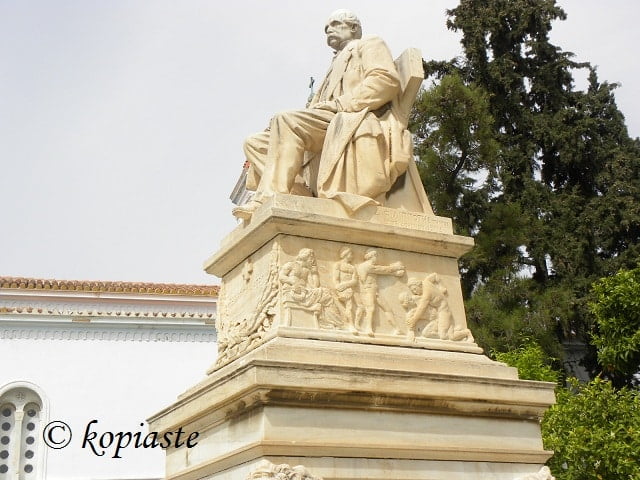 The family of Georgios Averof 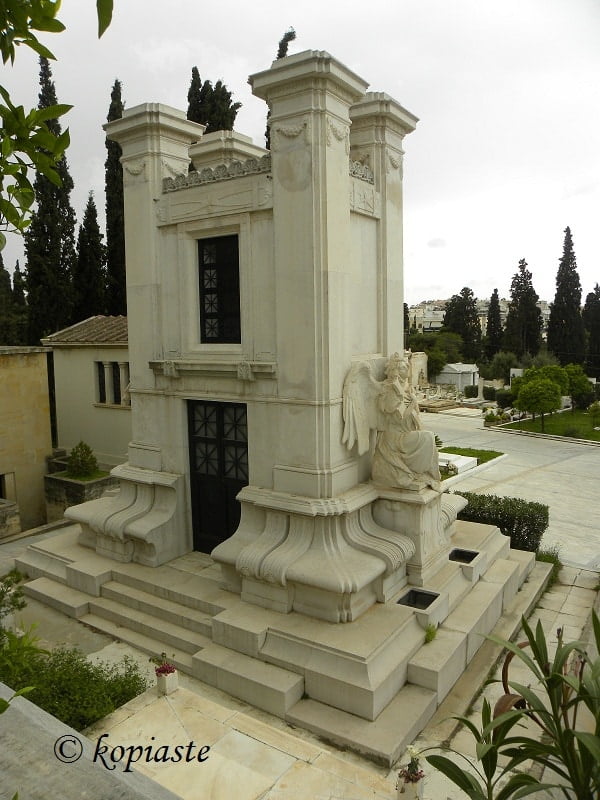 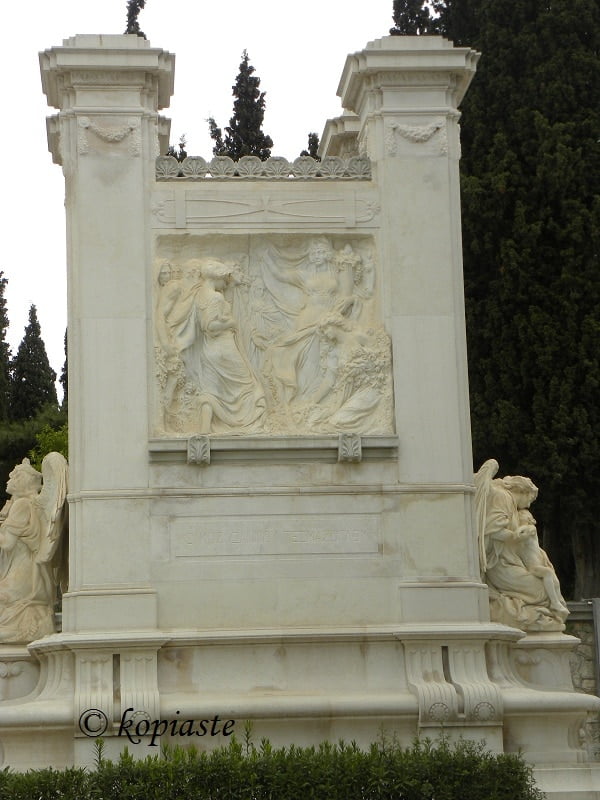 Emmanuel Benakis, Greek merchant and politician, considered a national benefactor of Greece.  His daughter Penelope Delta was a famour writer.  Today’s Prime Minister, Antonis Samaras, is her great grandson (from his mother’s side). 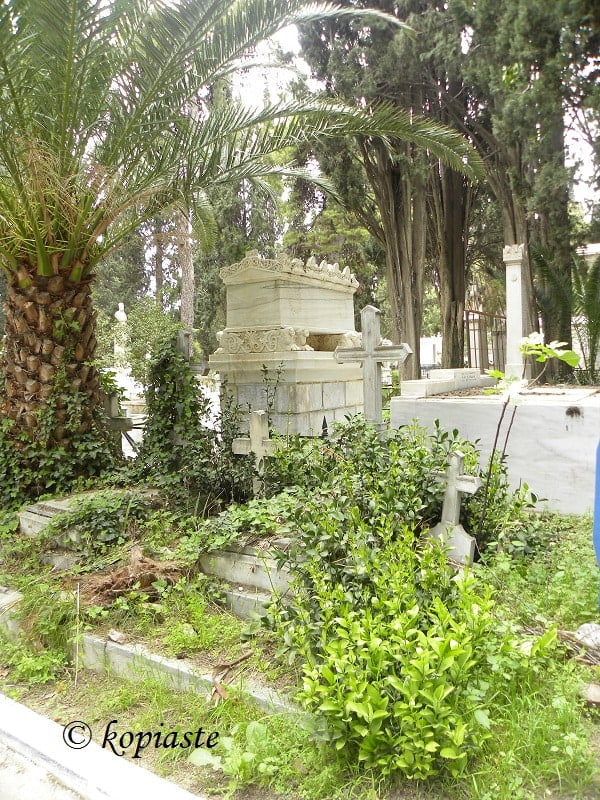 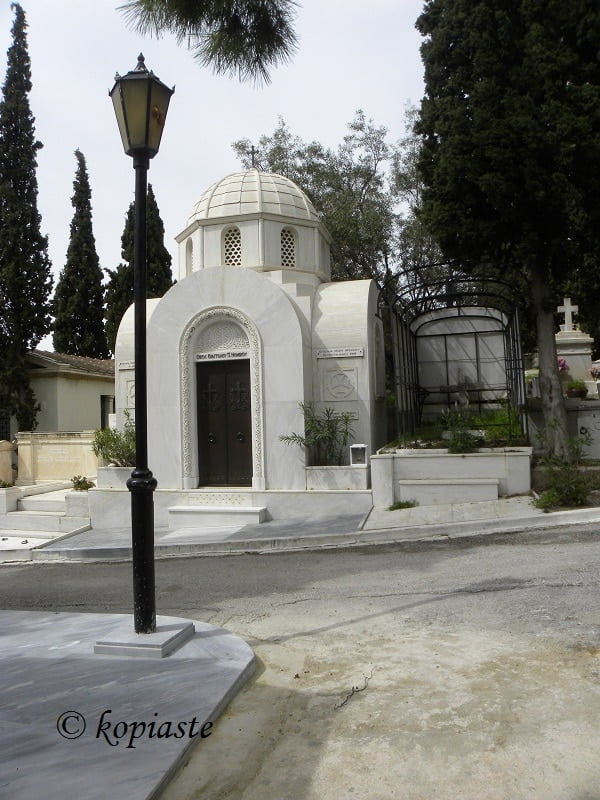 Family grave with lots of crosses 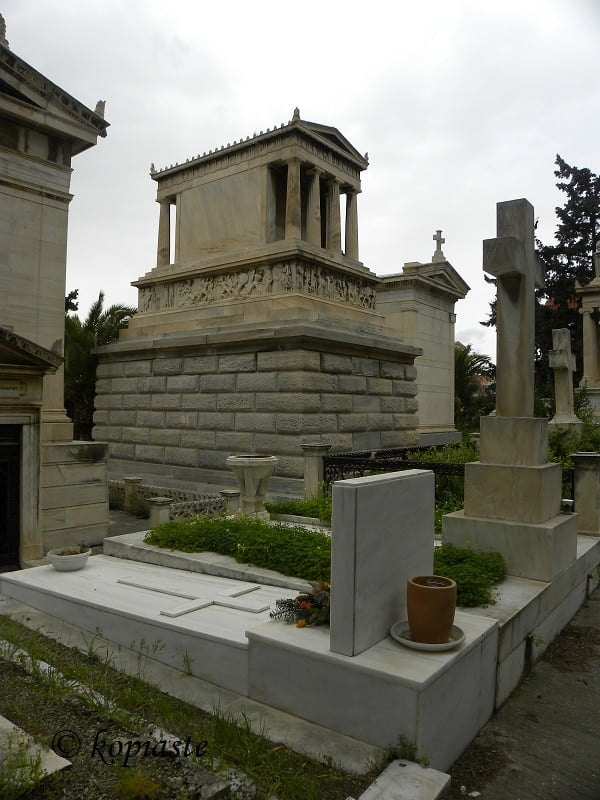 Heinrich Schliemann, amateur archaeologist who excavated the site of Troy. 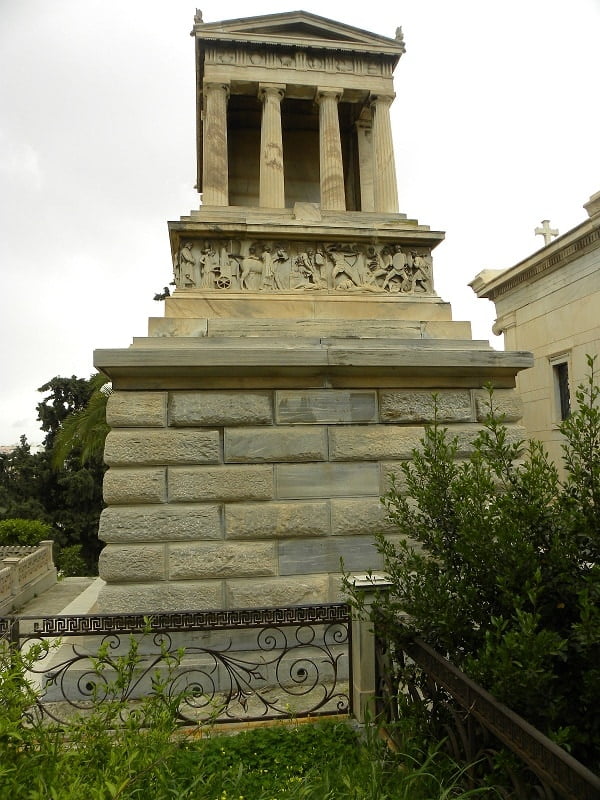 His Tomb was designed by  designed by architect Ernest Ziller, who was also buried in the same cemetery.    The frieze along the bottom shows scenes from the Iliad, interspersed with scenes from Schliemann’s life (conducting excavations at Mycenae, for example). 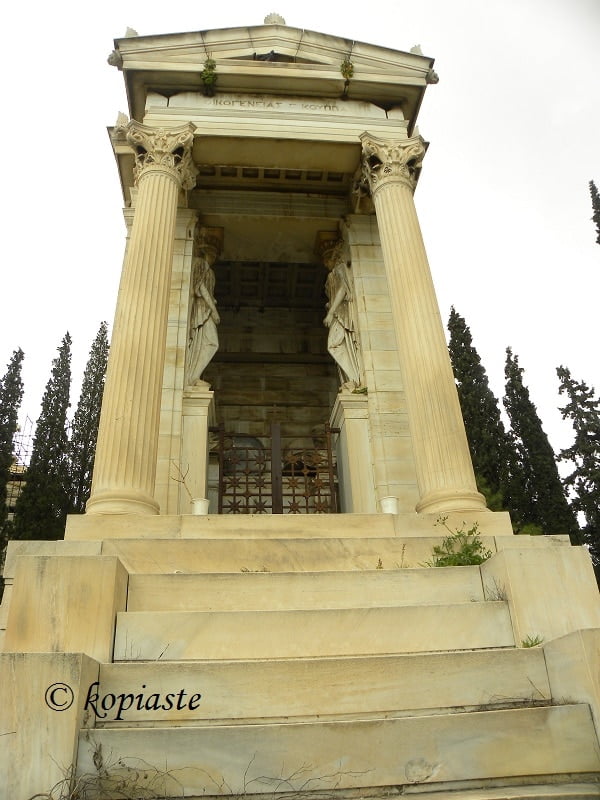 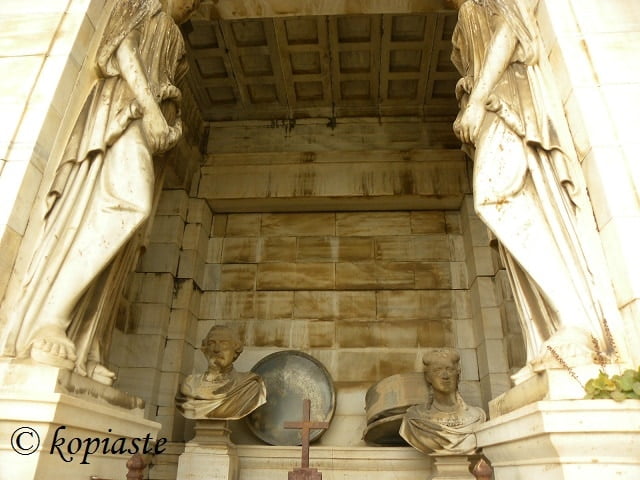 There are two busts in the interior of the tomb, marked as that of Gerasimos Kouppas, born in 1814 and the other presumably of his wife.

The sculpture is claimed by D. Philippotis (son of the sculptor Z. Philippotis from Tinos island),  in an inscription at the base of the right hand Karyatid (the easternmost one). Philippotis was responsible for a number of the cemetery’s sculptures, such as that of Averoff. 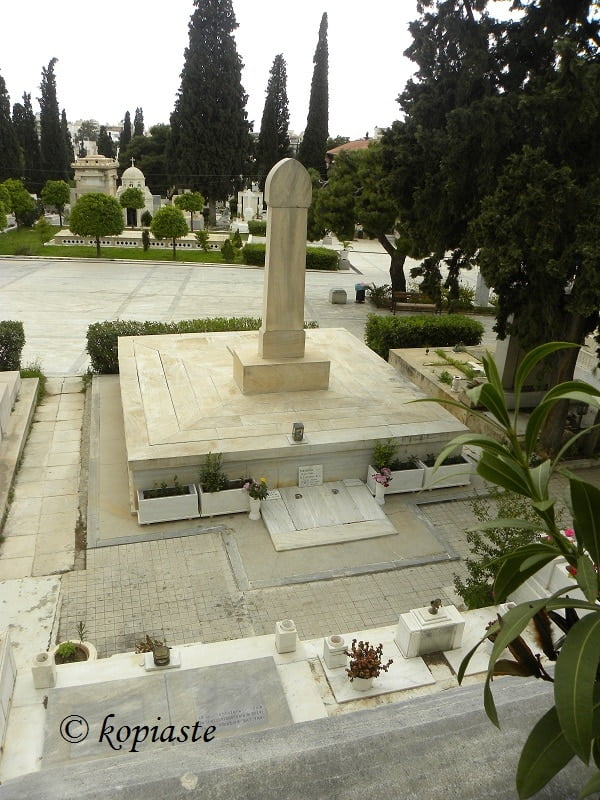 Spyridon Merkouris was a Greek politician and long-time mayor of Athens in the early 20th century.  His grand-daughter Melina Merkouri, actress, known in her performance of “Never on a Sunday”.  She later became involved in politics and was the first woman Minister of Culture.  She was married to Film Director Jules Dassin, who is also buried there as well. 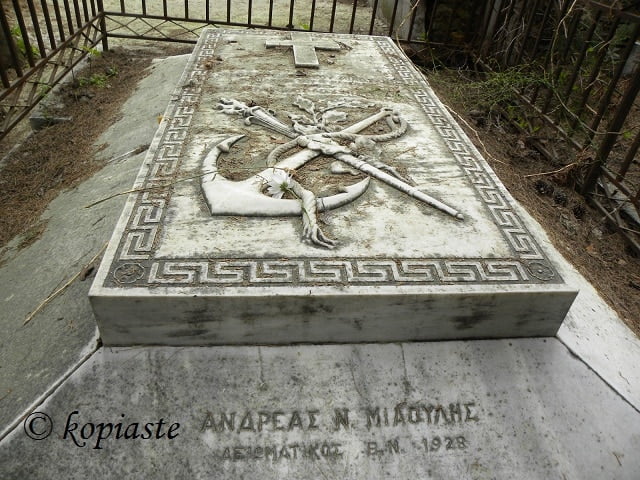 Miaoulis was an admiral and politician who commanded Greek naval forces during the Greek War of Independence (1821-1829). 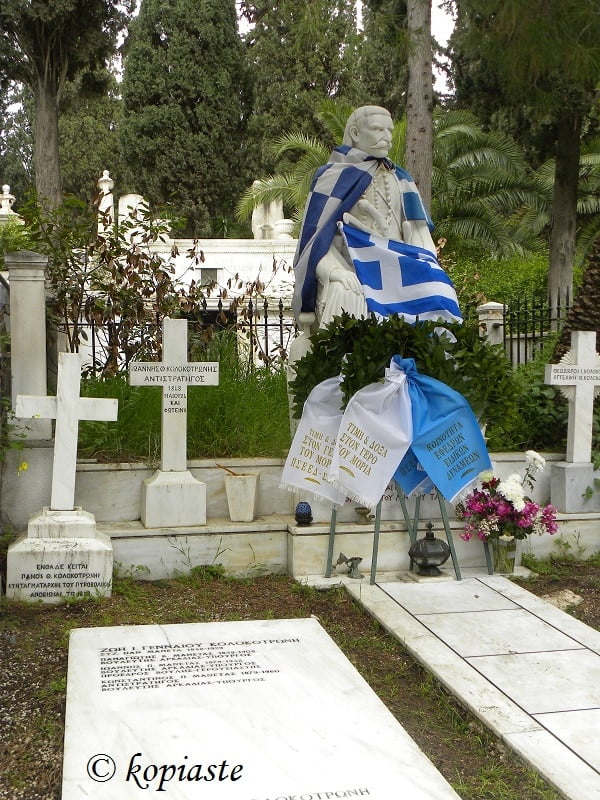 Theodoros Kolokotronis was a Greek general and the pre-eminent leader of the Greek War of Independence against the Ottoman Empire.  Our visit was on the day celebrating the Greek Independence day and was honoured earlier on that day. 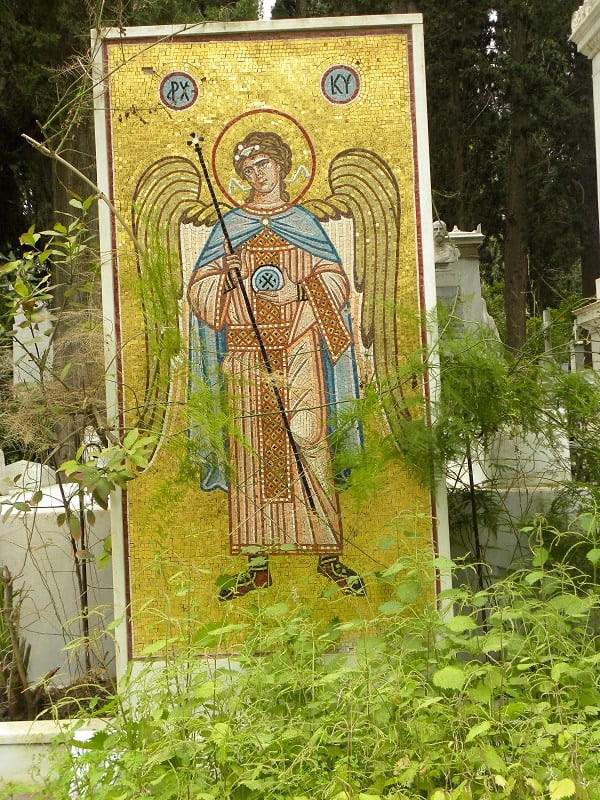 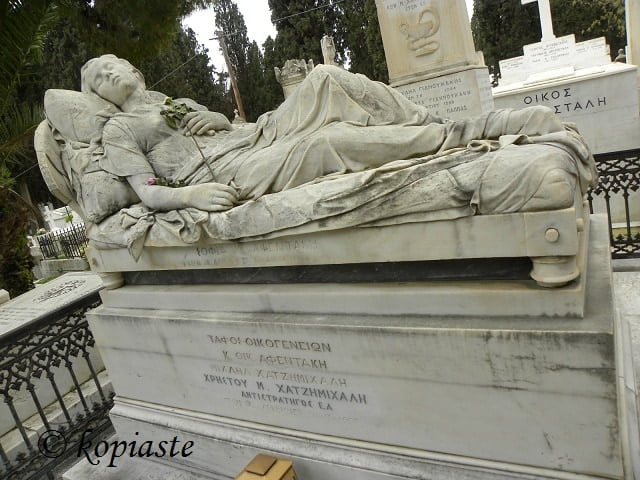 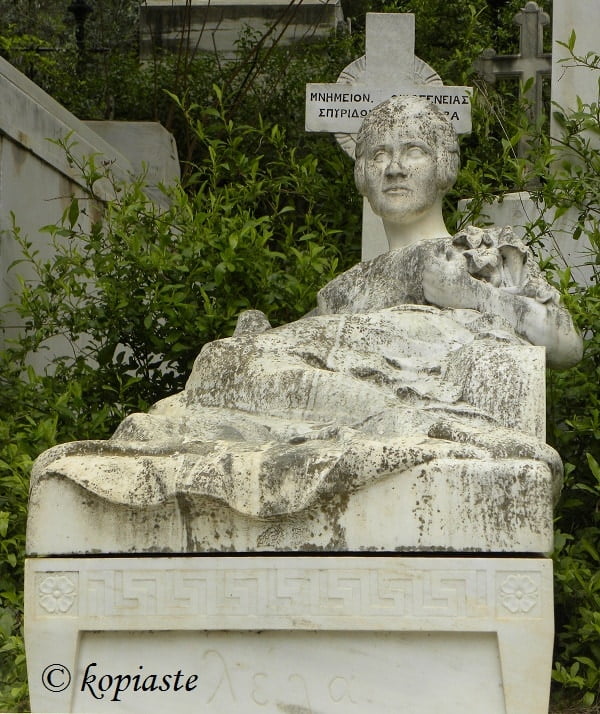 Lady lying on a bed … 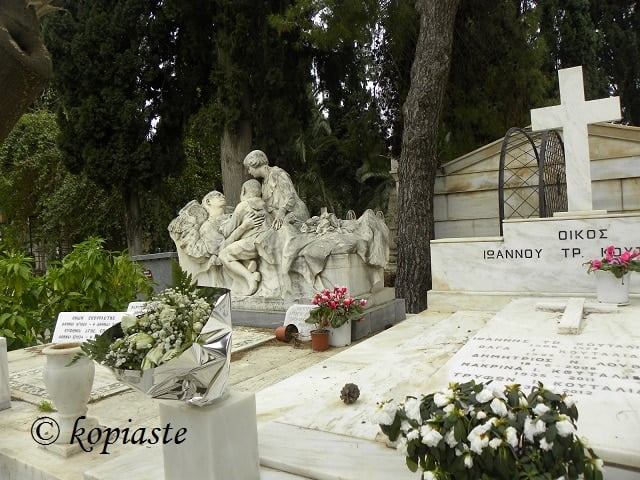 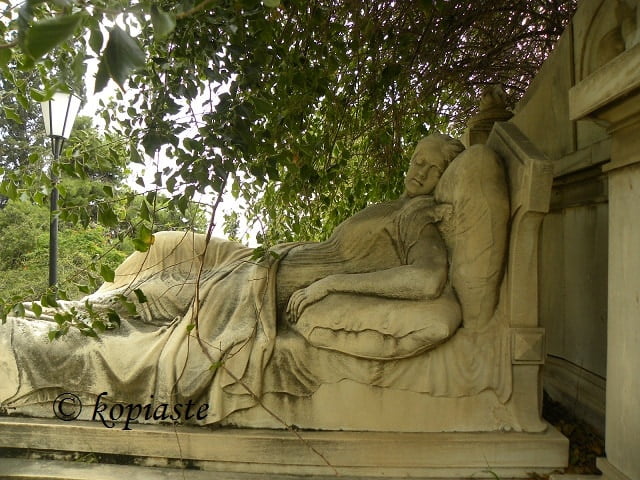 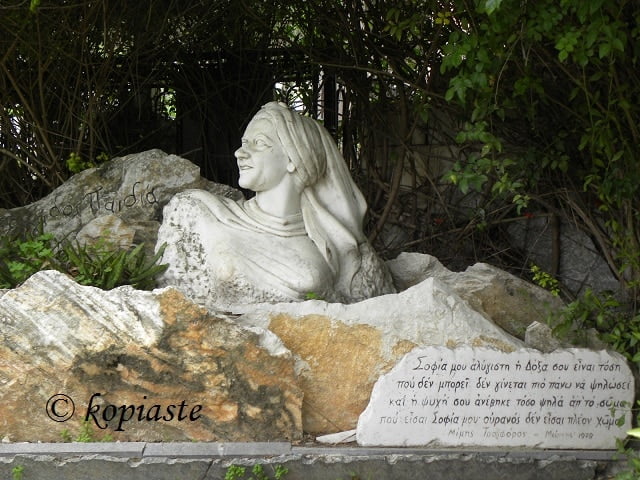 Actress and singer.  Her performance of patriotic and satirical songs became a major inspiration for the fighting soldiers during the Second World War. 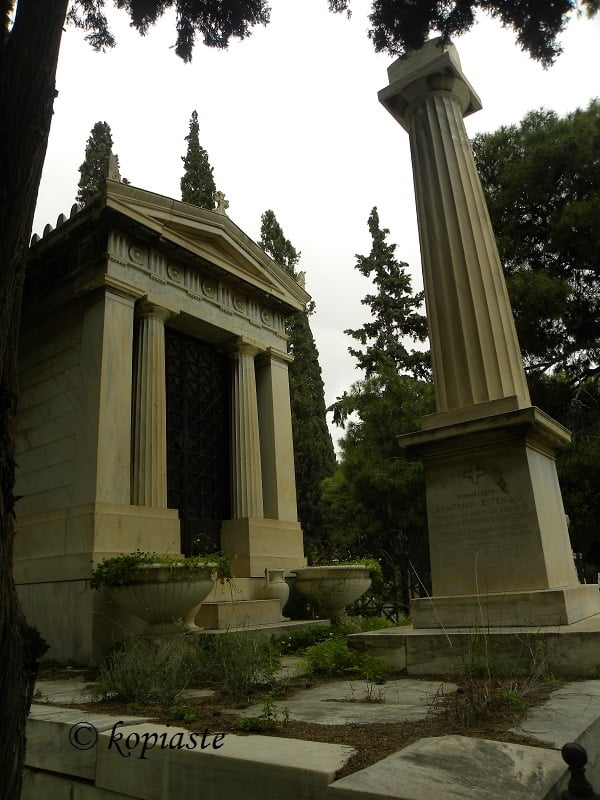 It is peaceful, green and full of surprising beauty.  If you are in Athens it’s worth a visit.

Hope you enjoyed the tour,

Nice pictures Ivy, like the sculptures... Enjoy your week :)

The mix of sculpture and plantings is lovely. Thanks for this photo tour!