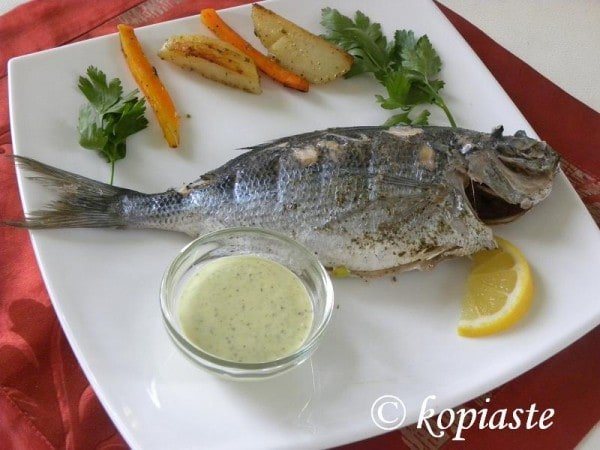 Greece has a tradition in fishery since ancient times.   If you take a look of Greece οn the map you will see thousands of kilometres of coastline and only our Northern borders are not surrounded by sea but even there, fishery was part of their occupation as they would fish in lakes and rivers.    So, fish  has been part of our diet for millenia and we know this from Homer’s texts where it is mentioned as quality food and also Plutarch gives advice relating to fishery but also in many other sources such as Aristotle and ichthyology where he studies and describes 117 species of Mediterranean fish .  We also see scenes of butchering fish on ancient terracotta vessels or scenes on frescoes or mosaics showing a young fisherman holding the catch of the day or engraved on a stele (column) of the late 3rd century b.C.  where fish are listed with their price and in many museums where the fishing equipment they used is not very different from what is used today (fishing hooks etc).  See my post on the Archaeological Museum of Nafplion. 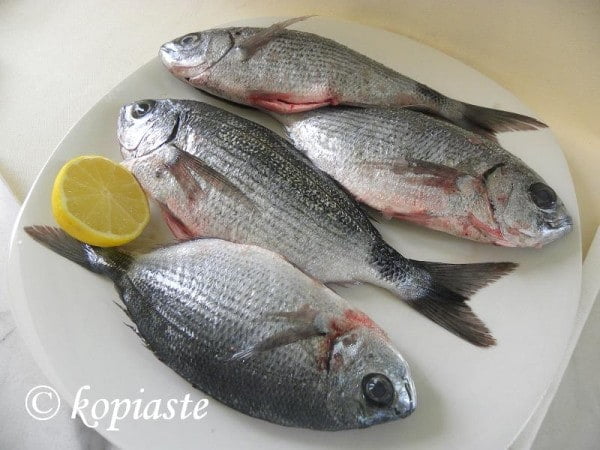 In contemporary times, some fish are very expensive and in these days when the economic crisis has unfortunately affected all us, fortunately enough Greece has a big variety of fish which are very tasty and within our budget.   Pisciculture is also widely developed providing cheap fish.

Cheap fish include gavros (anchovies), sardelles (sardines), marida (pickerel), atherina (sand smelt), gopa (bogue), prosfigakia (similar to small cod), kolios (mackerel) etc.   You can find a delicious recipe for Sandwiched Sardines with Coriander Pesto which I posted a few days ago on my other blog.

Today I have two recipes for Melanouri (plural melanouria).   Melanouria (ancient Greek Melanouros) or Oblada melanura, from the Greek word “melas” which in Greek means black “oura” which means tail, is the saddled seabream also called the saddle bream or oblade, takes its name from its colour and is a common Mediterranean fish of the family of  Sparidae. 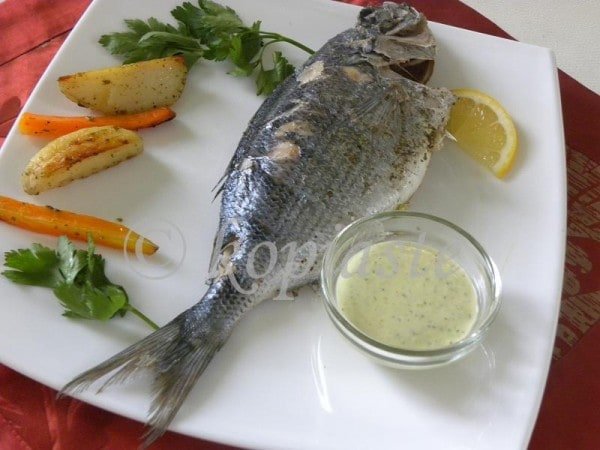 This is not one of the very cheap fish but not also one which is considered to be very expensive, depending on the size and time of the year.

In the first recipe as the fish were quite big, I preferred to cook them in the oven grill and served them with roasted vegetables and a white sauce, similar to ravigote which I tweaked adding yoghurt. 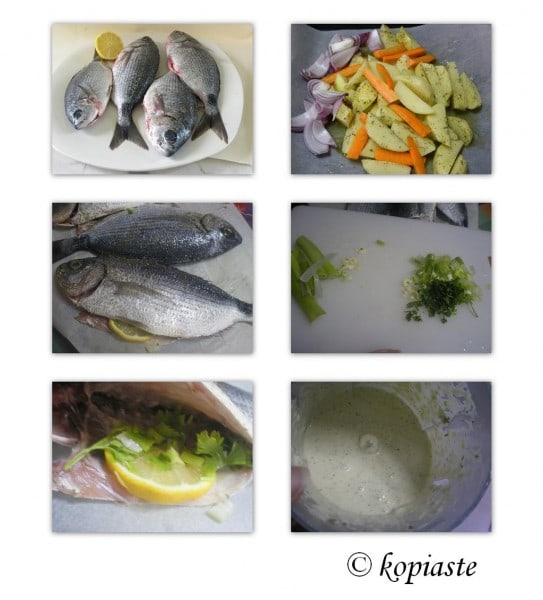 Mix the potatoes together with the remaining ingredients and wrap them in parchment paper and then aluminum foil.  Bake in a preheated oven at 200o C for about 1 hour and 15 minutes.

Rub the fish with salt, pepper and oregano.  Fill its belly with the remaining ingredients.

Uncover the vegetables and place the fish on a grill on top of the potatoes.

Lower heat to 180o C and cook for about 20 minutes, turning once.

Put all  the sauce ingredients in a food processor and mix. 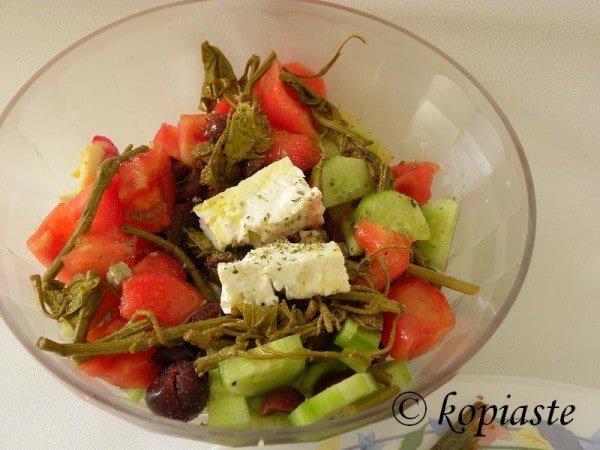 The second time I made melanouria were fried.  These were quite small, around 200 grams each, so I just seasoned them with salt and pepper, coated them with flour and fried them in olive oil.  All it needed was just some lemon juice on top and they were delicious.

There is nothing complicated about frying fish but the star here is the salad, which I made a few days ago and which I wanted to post.  I call it “Pickled Salad” as I used all the pickled vegetables and fruit I have pickled and believe it or not these are the same cherries I pickled last year.  Since now is the cherry season, I strongly recommend that you pickle some to use in your salads.  I for sure will make some more.

The amounts given for the salad are just indicative, as you can add as much of any ingredients you like the most.  Although most of the vegetables were preserved in vinegar, I still added vinegar to the salad, as they were not sour at all but had an amazing taste.

The only thing you must do is steam the potatoes (or boil) with the skin, peel while they are hot, cut the potatoes and drizzle with some olive oil.  Allow a few minutes to cool and then add the remaining ingredients and mix. 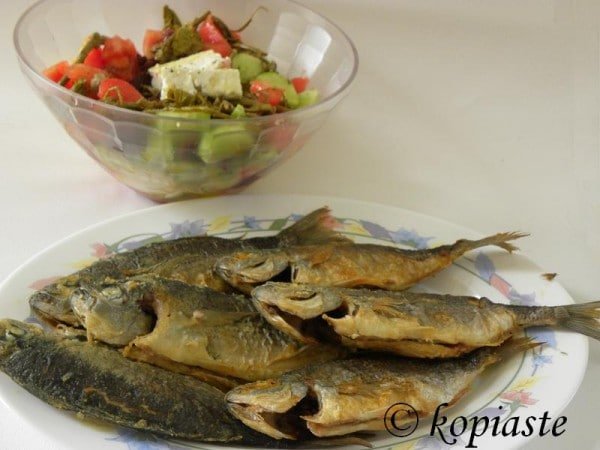 OMG !! Looks so delicious. I can't wait to try your pickled salad with that mouthwatering fish recipe. I love those sea breams too.

Wow, great recipes!! How beautiful are your recipes with fish!!! Is it really true for me, that Greece is the land of fish and fish products.

We love this type of fish. I will try out your recipe next time I buy it Ivy thank you for sharing it! My recent post Khoubizette maize b lebn

These are both wonderful recipes...I am especially enjoying the thought of these fish with your pickled salad, very refreshing :)

Nice post on the variety of fish available in Greece Ivy...I must admit that seafood is my weakness (in terms of preparing and cooking it). Although I do love the "psaro-tavernes" in Greece. Thank you for your lovely recipe... My recent post Photo Friday-The Mortar and Pestle