A light and fluffy olives cake recipe made with mild extra virgin olive oil and kalamata olives that’s perfect for both breakfast with a cup of coffee or as a snack.

Last Saturday 40 Greek Food Bloggers were invited to the Factory of Elais for a tour and familiarization regarding the production and qualities of good olive oil.

Arriving there we were pleasantly surprised by the graffiti on the exterior walls which depicted scenes of olive oil production. 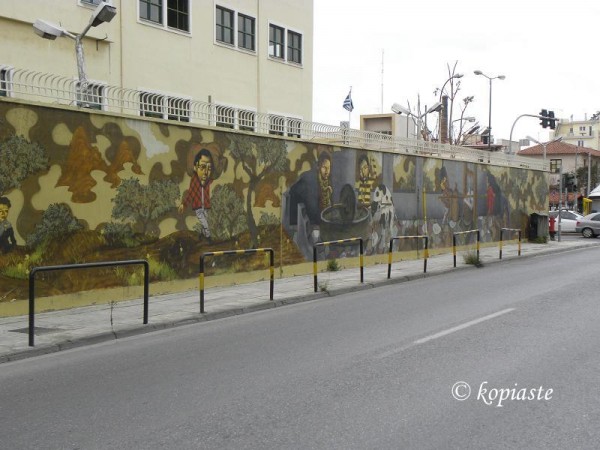 We passed inside the factory.. .. and were again pleasantly surprised to see a beautiful building in the centre of the grounds was a villa which belonged to the owner of a ceramic factory of the early 20th century. 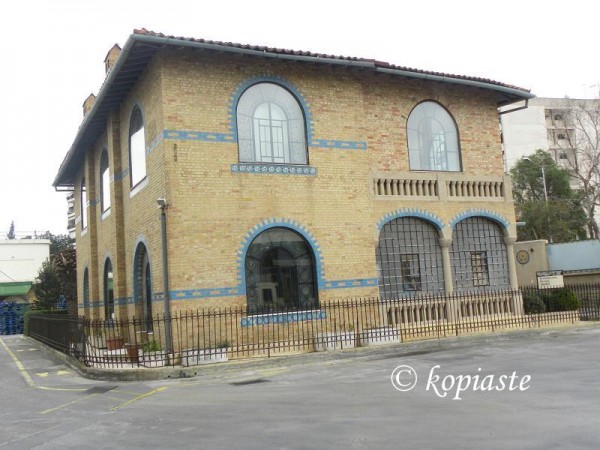 The building was renovated by its present owners and is the training centre of Elais.

Look at all the beautiful stained glass windows. 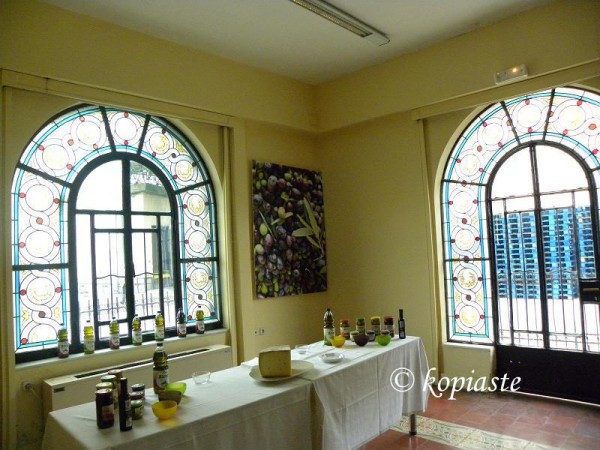 One of the rooms which used to the the study of the first owner was very beautiful.  All the ceiling and walls were in carved wood and the walls were decorated with icons and mosaics.   Some fossils of ancient olive trees were displayed in a case.  There was too much light from the two windows so I couldn’t get any decent photos. 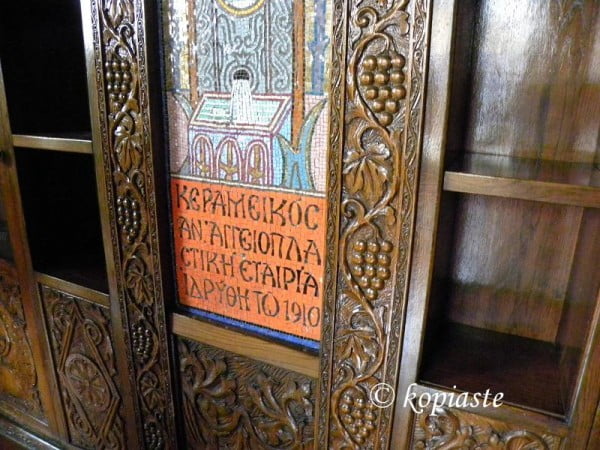 After the short tour in the building we were offered drinks and snacks but we were told by the organizers that if we wanted to taste the olive oil we shouldn’t drink or eat anything before, so we skipped the coffee. 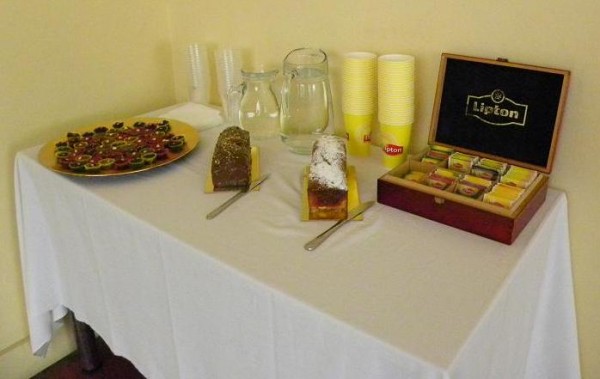 We then went into the training centre where people from the marketing department, the sales department and the chemist explained to us everything we should know about good olive oil.

They were all very polite and answered all our questions and queries. 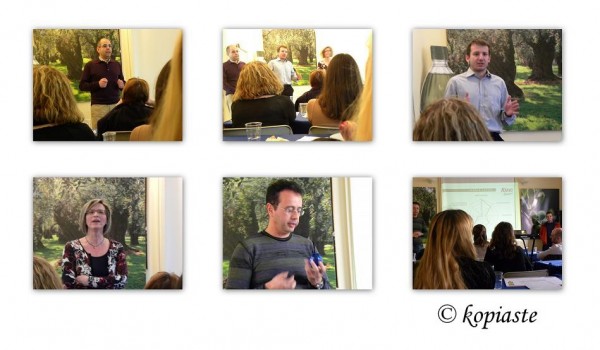 After that we got to taste all kinds of olive oil, including some bad ones which were either oxidized, fusty, moldy and even sour like vinegar.   After cleaning our taste buds with either bread, water or apple we then tasted different types such as mild olive oil and the traditional but the best of all was “agourelaio”.

Agourelaio means  “olive oil which is not ripe” and is  regarded the best olive oil, which is the first cold pressed from olives which are not yet ripe.

That means twice the amount of olives is required to produce the same amount when the olives are ripe.  That also means that the price of this olive oil is higher than the traditional olive oil.

It has a deep green colour and is fruity but pleasantly bitter and gives a spicy kick to the throat.

This is the elite of the olive oil with 0.5 % acidity whereas extra virgin olive oil standards are up to 1% acidity.  Once you taste this olive oil you will keep asking for more.

I must admit that I had never bought agourelaio before but now I am a fan and from now on there will always be a bottle of agourelaio to be used raw,  in salads, dips etc. 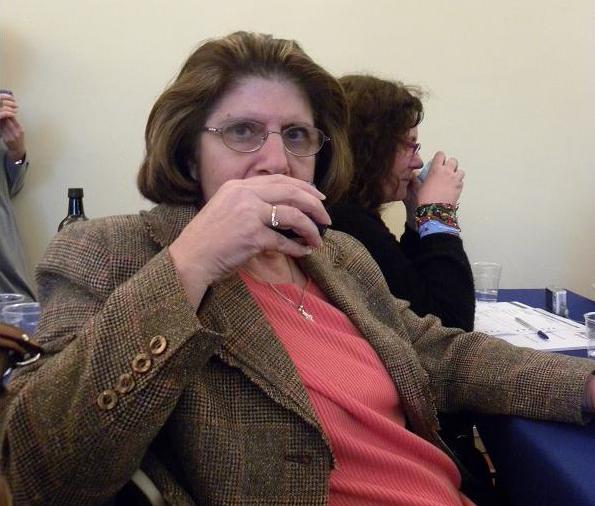 Greece produces the best olive oil in the world and Greek olive oil is characterized by its spicy taste.  It has hints of pepper and mustard.  Its aroma varies depending on the are where the olive are produced, so in some places, like for example Lakonia where there are lots of citrus trees, the olive oil has an aroma of citrus.

In other territories it may have the aroma of grass, almonds, lemons or herbs such as chamomile, basil and olive groves near the seas have the taste of salt etc.

2,2 million tons of olive oil per annum are produced around the Mediterranean, out of which 250,000 tons are produced in Greece.

The remaining is exported, mainly to Italy which is mixed with their olive oil and is sold as “Italian”.

Please read what Sara Jenkins, a Palestinian Chef has to say about Greek Olive oil. 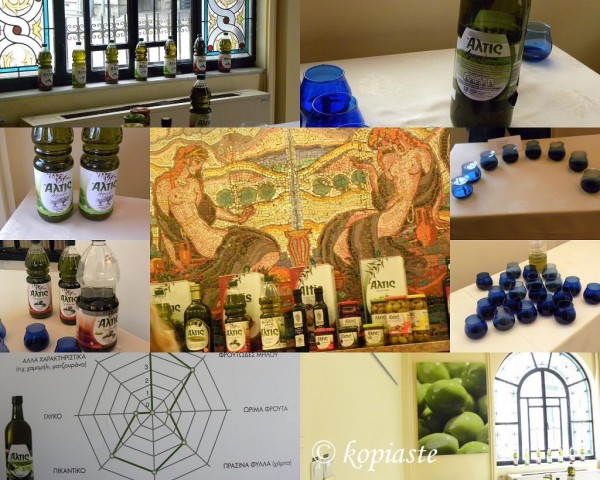 At the end we got to taste some of their products but I just stayed for a short while as we were supposed to finish at 1 p.m. and finished at 2. I had guests at home waiting for me for lunch so I had to rush back but it was a wonderful experience and I wish to thank Elais for their hospitality and the Greek Food Bloggers for organizing it. On our way out we were offered a bag containing a bottle of agourelaio, a pipette and a cd with lots of useful information about olive oil.

To thank Elais I am posting a recipe which is relevant with today’s post.   I made an Olives Cake with Olive Oil  based on one of the recipes in my cookbook “Eliopita” but with a lot of new additions to the traditional recipe.

On Monday the Greek fasting period is starting so this is a vegan savory cake which is perfect for the pre-Easter period. 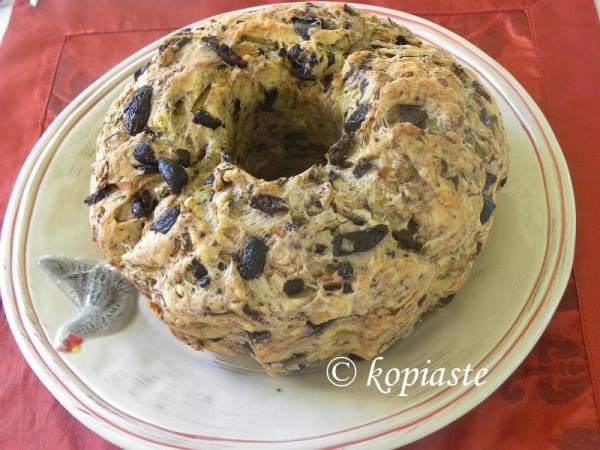 In the recipe I would suggest that you use the traditional or a mild olive oil. 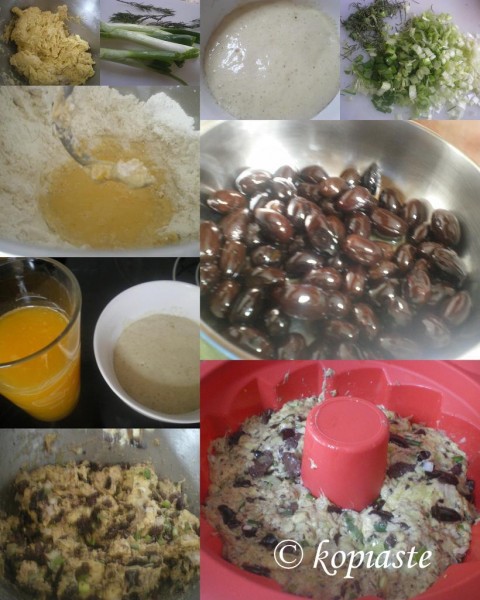 In a bowl mix the dried yeast, with the sugar and salt.  Add 2 heaped tablespoons flour and a few tablespoons lukewarm water and mix together util it becomes like batter.  Cover and leave this to bubble (about 10 – 15 minutes).

Add the remaining flour with the olive oil and mix with the dough hook.  Add the yeast and mix.  Add the orange juice and mix until the dough is ready.

Finally add the onions, rosemary, orange zest and olives and mix again until combined.  The dough will be a little sticky.

Oil a baking tin (the silicone I used does not need to be oiled) and place dough pressing and arranging it to spread and flatten.  Wet your fingers with 1 tablespoon olive oil and wet the surface just to make it even.

Preheat oven at 180o C/ 350o F and bake for about one hour until a knife inserted in the centre comes out clean.