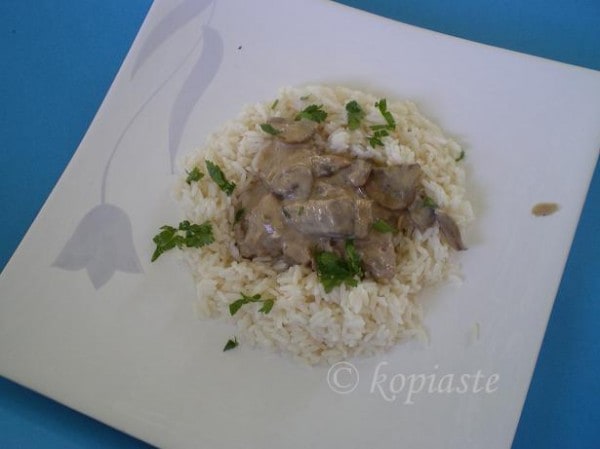 There are certain recipes I have heard of but since I have never tried them before, I never bothered making them myself.   I was debating whether to make Beef Stroganoff or a Borscht beef soup for Joan’s Culinary Tour Around the World, as this week’s destination is Russia.

I wanted to make the Borscht soup very much as I had the beets ready as well as all the other ingredients at home.  However I had second thoughts as I was not in the mood of preparing something extra for my daughter, who doesn’t like beets.  I shall leave the soup for next week and make it meatless when we will be fasting.

In Greece, we usually eat veal, instead of beef, at least in my family, and although other people are crazy about veal, I am not really fond of it, or red meat in general.  However, as my children like it, I do cook it once a month and there are a few recipes that I enjoy cooking and eating, provided it is not very often and mostly I prefer it in the form of minced meat.

Beef Stroganoff is a classic Russian recipe from the 19th century where beef is sautéed and then cooked in sour cream.  This recipe has passed the boundaries of Russia and is popular in other countries as well, with a few variations to suit with the flavours of each country.  After reading a few recipes on the internet I  liked this one best but I decided to make my own changes, to suit our taste.   First of all I used red wine, instead of white wine and used olive oil instead of butter. I added garlic and fresh rosemary, I did not use beef broth and finally, as there is no sour cream in Greece, I added Greek strained yoghurt. I also changed the cooking method as well because in my family they don’t all like mushrooms, so I had to make a roux and add it separately to thicken the sauce and I had to sauté the mushrooms separately and add them at the end.

The dish turned out to be fantastic. I used veal instead of beef and marinating it in the wine made it very tender and tasty.  The velvety Greek yoghurt made the sauce thick, rich and flavourful but the star of the dish was the rosemary which gave a wonderful taste to the sauce. 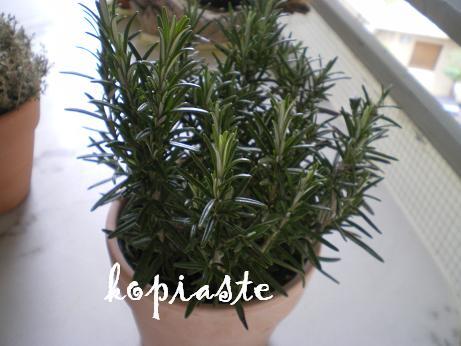 Wash and cut the meat into cubes (not stripes) add wine, Worcestershire sauce, garlic, salt and pepper and marinate for at least three hours.  Drain wine but do not discard. 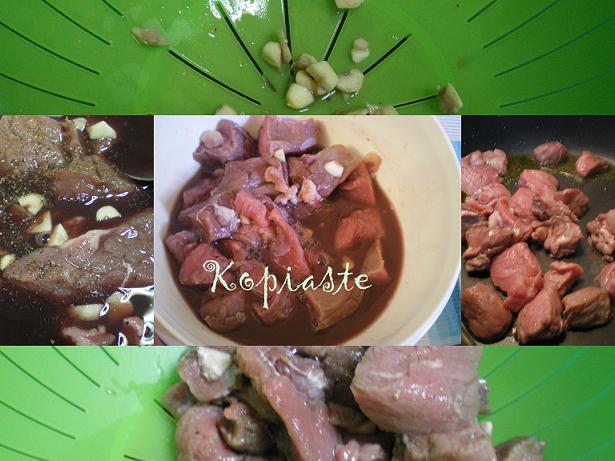 In a sautéing pan over high heat, heat the olive oil and sauté the beef on all sides, then push the beef cubes off to one side. Add the garlic from the marinade and together with the onions, sauté until translucent and deglaze with the wine marinade.

Add the mustard and the water, cover and simmer until the meat is tender, about 1 hour and thirty minutes.  Add more water, if necessary. 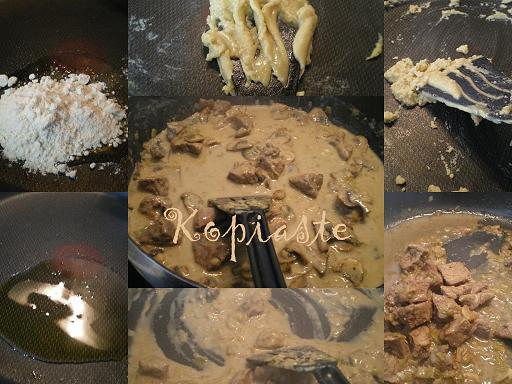 In a non-stick frying pan, heat the olive oil over high heat and sauté the mushrooms. Add the rosemary, remove to a platter and set aside.

In the same frying pan heat the olive oil over high heat and add the flour and stir to make a roux. Add the milk and when it is creamy add to the meat. Adjust salt and pepper. Add the yoghurt and mix. (For those who do not like mushrooms, the dish is ready).
Five minutes before serving, stir in the mushrooms and mix for one minute. 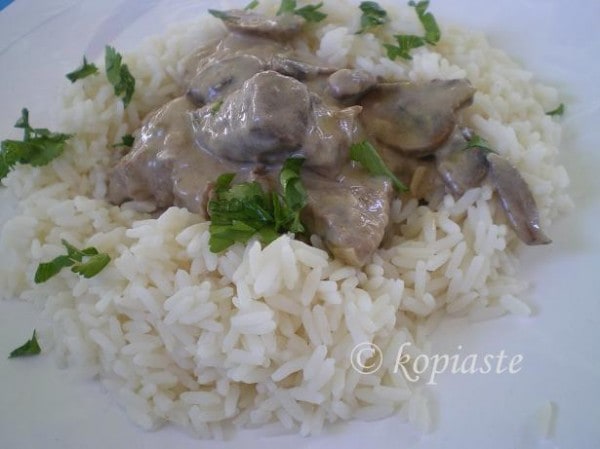 Serve with a rice pilaf.

I made beef stroganoff decades ago and stopped; your beef stroganoff is lovely and the idea of adding rosemary is one I will adopt on my next attempt! My recent post Thanksgiving ideas

Someone was just asking me for a good beef stroganoff recipe the other day. Perhaps I will direct them here! Looks wonderful- prepared either the way you made it, or the original. No sour cream at all in Greece, huh?

I've never made Stroganoff and it's a recipe I keep seeing prop up everywhere. Yours looks really delish and I too would serve mine along-side rice.

Ivy, glad you enjoyed your Stroganoff. A similar sauce can be made to accompany Schnitzel...also yum!

My husband loves beef stroganoff but had only really eaten a lot of the boxed Hamburger Helper version until I made it at home last year. So good!! I'm glad you tried it as well.

That's also really great that you got to add your own fresh rosemary. :)