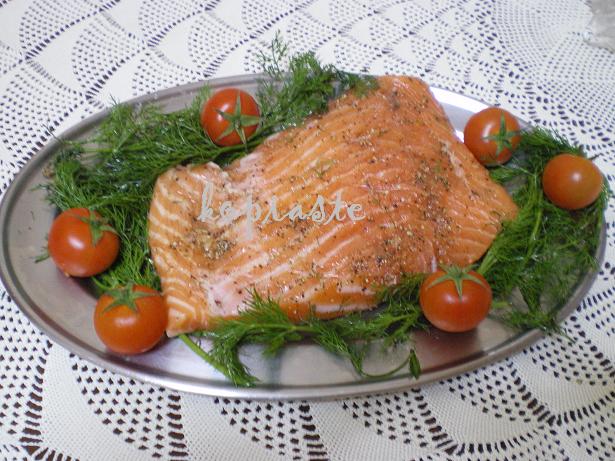 Joan, of Foodalogue,  who is one of our Members at  BloggerAid,  is spreading the word about hunger by posting a series of posts during A Culinary Tour Around the World.    During her trips, Joan will be introducing us to some virtual friends she will be making and talking about the country and its culture.

As Joan Joan says: “Over the past year or so, many of us have had to cut back on our discretionary spending but, to the best of my knowledge, we all still have food on the table. Millions of people do not. I am attaching this event to BloggerAid to help promote the effort to fight world famine. We begin with awareness. And, hopefully, awareness will lead to a call-to-action. Where possible, the event will include a glimpse of the culture and economy of the destination as well as a national dish and recipe.  Hopefully, the ‘trip’ into a culture we may never know will motivate readers to participate in the fight against hunger via BloggerAid or the World Food Programme and other worthy organizations“. 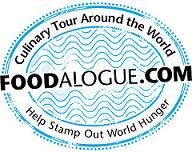 Joan’s first stop is Norway and she is already there waiting for all of us to show up, so that she can introduce us to her Scandinavian friends and show us around.

Before packing, I tried to find out more about Norwegian cuisine and here is what I found out:

Norwegian cuisine is in its traditional form largely based on the raw materials readily available in a country dominated by mountains, wilderness and the sea. Hence, it differs in many respects from its continental counterparts with a stronger focus on game and fish.

Modern Norwegian cuisine, although still strongly influenced by its traditional background, now bears the marks of globalization: Pastas, pizzas and the like are as common as meatballs and cod as staple foods, and urban restaurants sport the same selection you would expect to find in any western European city.

The one traditional Norwegian dish with a claim to international popularity is the smoked salmon. It is now a major export, and could be considered the most important Norwegian contribution to modern international cuisine. Smoked salmon exists traditionally in many varieties, and is often served with scrambled eggs, dill, sandwiches or mustard sauce. Close to smoked salmon is gravlaks, (literally “dug salmon”), which is salt-and-sugar-cured salmon seasoned with dill and (optionally) other herbs and spices. Gravlaks is often sold under more sales-friendly names internationally. A more peculiar Norwegian fish dish is Rakfisk, which consists of fermented trout, a culinary relation of Swedish surströmming.

That information is what I read on Wikipedia and I started looking to find out how to make gravlaks.  During the Middle Ages, gravlax was made by fishermen, who salted the salmon and lightly fermented it by burying it in the sand above the high-tide line. The word gravlaks comes from the Scandinavian word grav, which means literally “grave” or “hole in the ground” (in Swedish, Norwegian, Danish and Estonian), and lax (or laks), which means “salmon”, thus gravlaks or gravlax is “salmon dug into the ground”.  Well, I didn’t follow that method for sure but here is a more easy approach.   I gave this recipe my touch by adding some lemon zest and the final result was giving the gravlax this lovely aroma.   The amount of dill used depends on what amount a bunch consists of in each country.  When in France and Switzerland, I was amazed by the really small quantity each package had in.  For example, in France they would need 5 packages to make one bunch of a Greek bunch of dill.

Wash the fillet but don’t remove the skin but just scrub it to remove fish shells.   Dry with a paper towel. 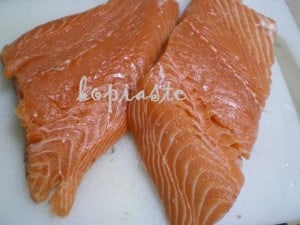 Mix salt, sugar, lemon zest and juice, peppers and ouzo and rub the mix into the fish fillets. 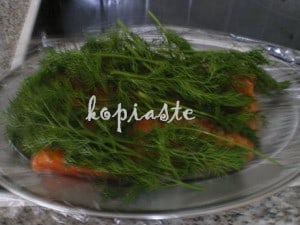 Wrap the fillet with the dill and wrap it tightly into cling film. 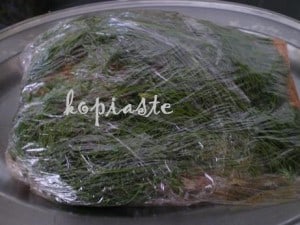 Store in the refrigerator with some additional weight, on top, corresponding to a couple of pounds. Leave it in the fridge for three to four days.  Open the cling film once a day and add fresh dill.

Scrape away the spices and the dill and cut the fish from the skin in slanting, nice thin slices. This might be easier if the fish is slightly frozen.

Serve cold with spinach (dampened with butter or as a stew), scrambled eggs (prepared with chopped chives), and potatoes (boiled or stewed with cream and dill) as a dinner, or alternatively serve as a starter on toast (with a slice of lemon and mustard sauce) or as part of a smorgasbord with wholemeal bread and a mustard sauce. 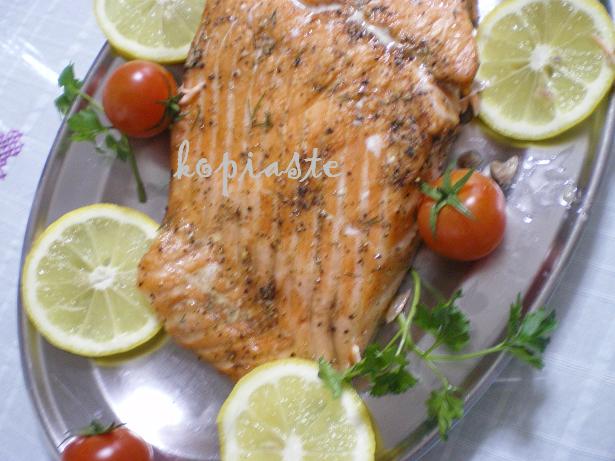 This is cured and eaten raw but to tell you the truth, as I also got some reaction from the family I broiled it only for two minutes on each side and they were satisfied that it was not raw.

I tried it raw and for me it was fine.

This look amazing and I think is delicious. Wow, I must try this recipe. thank you for sharing it with us.

Excellent site, this really makes me hungry, can someone help me out here to cook Norwegian cuisine so i can prepare it to my family.

haha yeah right, this site is pretty amazing. I love the food. Makes me crave ;) Can you please share more healthy recipes here? Thanks much!

If you have the opportunity to make this again, I suggest adding a pinch of smoked paprika which renders the final product's taste a bit more like traditionally cold smoked salmon.

I love salmon, especially smoked salmon and am sure I would love Gravlax. Great choice Ivy.