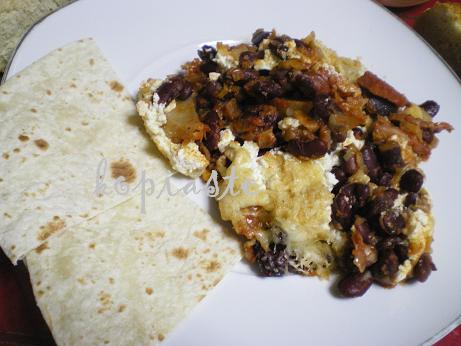 Whenever I go to the supermarket with my husband and I see something that I remember reading in a recipe and I would like to try it, I always add to the cart and worry later how to cook it. This happened when I bought some red kidney beans. In Greece we usually eat the small navy beans, the large giant beans called gigantes or the black eyed beans. I had these beans in my pantry for a few weeks but whenever I saw them there I couldn’t cook them as I forgot to look for a recipe and have them soaking from the previous night. Well the same thing happened when we went to France. When going to the supermarket there I saw chorizo, and chorizo was definitely something I had been wanting to try ever since I started blogging but I never found it in Greece, even in the big supermarkets. I have tried chorizo a few times since then but as I bought a big piece and could not eat it at once, I cut it in several pieces and have it in the deep freezer for future use. I had seen in the past chorizo combined with beans but when I google searched the two I did not find anything that I liked. I then searched for red kidney beans and after reading a lot of recipes I finally liked a recipe I found at AllRecipes which I made my changes and adapted it to the ingredients we like best and added the chorizo as well.

Although I do not make resolutions, I have made one resolution which I hope I can keep.    When I post, I usually add a lot of step by step photos.  However, this is time consuming both when I am cooking and when I am posting so I will try and add only a few photos from now on.

My friend Gloria, of Cookbook Cuisine and Food and Flavors of San Antonio is one of the first members of BloggerAid.  Gloria is a full-time writer for more than twenty years and is the one who gave us the idea and the know-how to publish a cookbook for BloggerAid.   Gloria is having a monthly Chili Cook-Off Challenge, so I am enterering with this recipe.  The winners are eligible to receive Gloria’s new Cookbook named Foods and Flavours of San Antonio, a chile pepper refrigerator magnet, plus the recipes we participate with, will be published in a new cookbook she is writing, so head over to Gloria’s blog and read all about it.

The chili was delicious and hot but for those who love really hot, hot, hot stuff you should increase the amount of green hot peppers.  These green hot peppers called “kerato” in Greece, which means horn, are of a light green colour and shaped like a horn and I used them to make tyrokafteri.  The first time I made it was mild hot as I added only harissa.  The tyrokafter I used in this recipe was quite hot as it was made with these hot peppers, so I added only 1/2 hot pepper in my recipe. 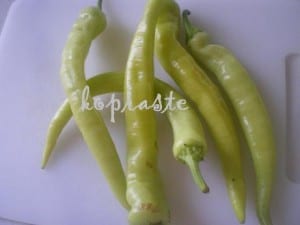 Soak red kidney beans overnight and in the morning, drain and then bring to a boil. Remove froth and then drain and add fresh water. Bring to a boil, add salt and simmer until soft.

Place beans into an ovenproof dish.

Bake for 2 hours mixing regularly until it is cooked and sauce is reduced significantly.

Crumble anthotyro and mix with tyrokafteri and 2 – 3 tablespoons of milk to form a thin to a thick cream and pour over chili.

Mix breadcrumbs with grated cheddar and sprinkle on top. Return to the oven to bake for a further 15 minutes until golden and bubbling. 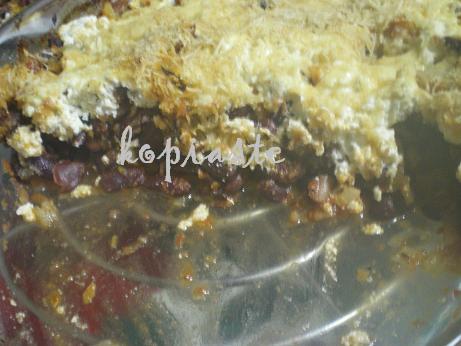 I am also sending this recipe to Lore, of Culinarty, for her event Original Recipes and to Debbie, of Kahakai Kitchen, in Hawaii, who is a new friend I made over at BloggerAid for her event Souper Sundays.

I love chili, I am not a fan of very spicy food so I try and keep it pretty mild. Yours looks great. A nice set of ingredients.

What an interesting combination of flavors. I never would have thought of putting all that together, but I bet it was yummy!

Ivy, this looks like the sort of dish I would dive into with a spoon and some crusty bread and not look up until I finished all of it! :-)