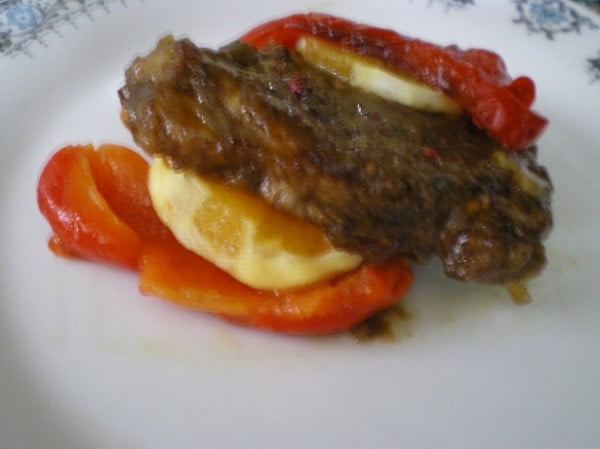 After seeing the announcement for the next the Royal Foodie Joust, hosted by Jenn, The Leftover Queen, I was puzzled what to prepare. The Leftover queen, who holds this monthly competition where foodies all over the world, join in a “cook-off event” using three ingredients. The three ingredients have been chosen by the previous winner, Heather, of Gild the Voodoolily, who won last months joust and who chose pork, citrus and red or white peppercorns.For vegetarians pork may be substituted by barley as the third ingredient.

When reading the announcement, I had no idea what to prepare with pork, pink or white peppercorns and citrus.Frankly I did not know what pink peppercorns were.I began by searching the web to see what pink and white peppers were as I had never heard of them.I did have ground white pepper at home which I use in recipes where I do not want the black pepper to be noticed in the dish but to be frank it never occurred to me that it came from white peppercorns.I then read about the pink peppercorns when I saw them in the small grinder, a relative of mine had sent me in a package which contained other spices as well such as cardamom pods, coriander seeds etc., among them was one with mixed peppercorns:black, green, pink and white.

The pink ones looked like red to me and it never occurred to me to learn more about them.

I searched the web but most of the recipes I found were pork chops with pink peppercorns and had already bought pork tenderloin for Sunday diner.I decided to make this recipe based on a similar dish I had prepared a few weeks earlier for a T.V. show (hopefully I will find the time to blog about it soon) but would change some ingredients following my instincts.I had oranges at home and I would just pick as many of the pink ones from the bottle grinder.

The only mistake I made was that I marinated the meat without first cutting it into slices, but I did cut them soon after taking the pictures.After the marinating time was over I strained the meat and I dredged it into flour with salt and sautéed it.I removed it into a platter and when both batches were fried I scraped the pan to remove whatever had stuck on the pan and then poured the marinade it.I put all the meat back into the frying pan and covered it with a lid and simmered it for 20 minutes.Again I removed the meat and stirred the marinade.I added a spoonful of flour from the one which remained from dredging and then I added some milk to make it creamy. Whilst I was trying to take a few pictures of the dish I prepared my husband and children were so eager to try it that they could not wait for me. I hurried to catch up with them and forgot to take a picture of the platter and the sauce.

This is my first entry for this month’s Royal Food Joust. If you want to participate and vote just go here and vote during the first five days of the next month. However, there is still plenty of time for you as well, if you are not a member, to join up, get cooking and soon we will be voting for you as well!

All the marinade
1 tablespoon flour
¼ cup of milk

Place bell peppers in a small baking tin, wet with a teaspoon of olive oil, sprinkle with salt and place in preheated oven at 180 degrees centigrade for half an hour.Remove and place in a plastic bag for 10 minutes and then remove skin and seeds and set aside to cool.

Remove pork from marinade, reserving remaining marinade. Drain meat and then dredge pork slices into flour with salt and sauté on both sides. Remove to a platter and add marinade into skillet. Stir constantly, scraping the pan. Place meat in skillet again and simmer for 20 minutes. Remove to a platter and add the milk and if needed add a spoonful of flour to thicken the sauce.e.

Decorate platter with the red roasted peppers and slices or orange.

This is a great compliment coming from a Chef. Thanks African Vanielje.

Well done for coming up with such a great recipe with unknown ingredients.

Thanks a lot Heather, you gave us nice ingredients.

Great use of the ingredients, Ivy! Good luck in the joust. :)