Pasta Carbonara is an Italian pasta dish made with spaghetti, guanciale or pancetta, olive oil, garlic, eggs, pecorino or parmesan, salt and pepper. 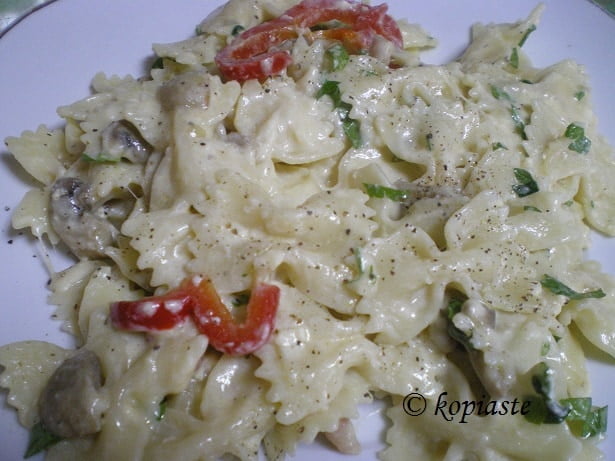 In Greece, we love adding some cream as well.   My children love it with cream, so you will see it in my recipes and I also make my own twist adding some mushrooms, bell peppers and sometimes feta or Greek yoghurt in it.  You can make it the classic way or try it my way.  I often make it with spaghetti or fettuccine but my daughter loves it with farfalle or penne.

There are some days when you want to go out and do some chores and have no time left for cooking. Well, today was one of those days. Actually, I had an appointment early in the morning with the dentist and then I had to go down town to Athens where I had some work to do with the civil service. I thought that I would have plenty of time to come back and prepare lunch. Well, I was wrong. How could I believe that dealing with civil service would end so quickly and be back in time? When I protested and said that I had phoned before coming and asked where I should go, I got the blunt answer, you have to go to the other building (which was about a kilometre away).

Apart from the rude employee I had to deal with, I eventually arrived at the other building, where I had to queue up and when it was my turn again they sent me not from office to office but from floor to floor. Anyway, I eventually finished and had to take a taxi back and stop at the supermarket for a few things I needed to prepare lunch. I came home at 1.30 and hand to have lunch ready by 2 p.m. because my daughter would come back from school at 2 p.m. and my son would leave to go to University because he had a test at 3 p.m. 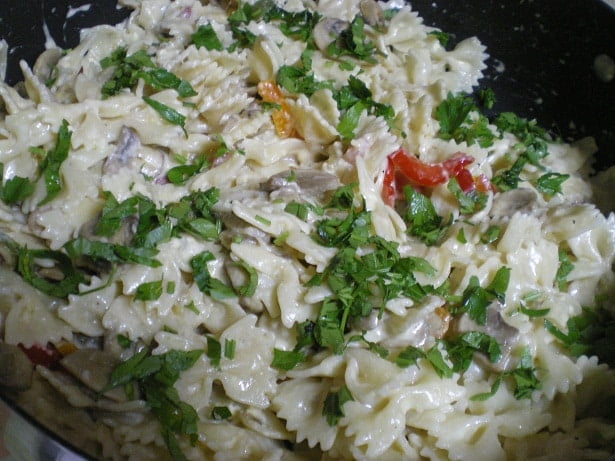 As soon as I got home I went straight to the kitchen and put the water in a pot to boil and rushed to the bedroom to change. I hurried back to the kitchen and started chopping.   I threw the first frying pan on the stove, added a spoonful of oil, in the meantime the water for the pasta had boiled, added some salt and the pasta was in the pot.

I started chopping the bacon. It was ready in no time as on last Saturday I bought a nice big knife, like the ones the chefs use, a little heavy but it works fine and you can cut anything in no time.

While the bacon was frying, I put the egg yolks and the cream in a bowl and whisked them for a minute, added the cheese, garlic powder and salt and that was ready in two minutes.

The pasta was boiling for five minutes, so I removed it from the heat but did not put cold water in it. 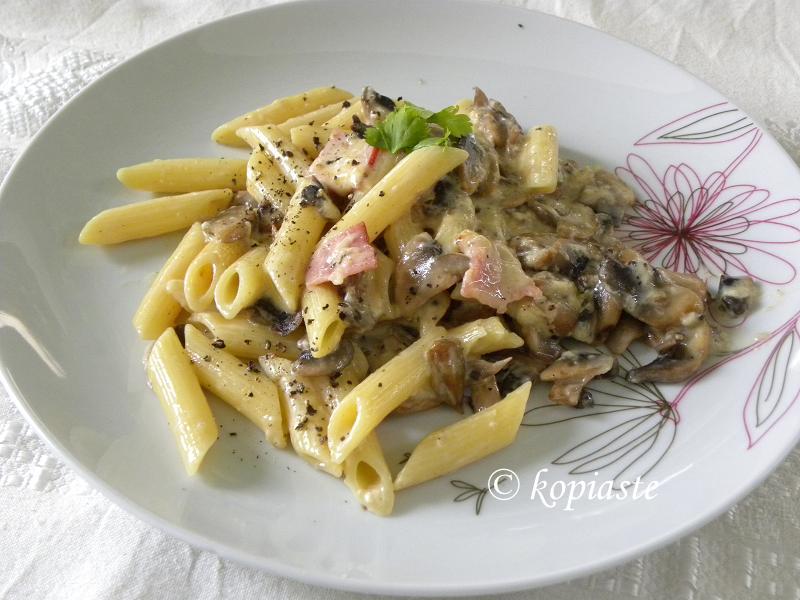 I put the other frying pan on and a spoonful of olive oil and sautéd the mushrooms with the peppers. The bacon was ready so I removed all fat and oil with a spoon. The mushrooms were nearly ready so I put the pasta in the colander to drain, reserving some pasta water (the pasta was now ready because of the extra time they remained in the hot water). The reason I was sautéing the mushrooms separately was that two of my three children don’t like mushrooms and peppers.  (You can do it directly in the pan after removing the bacon).

My children don’t like fresh garlic, so I add some garlic powder, which they don’t mind. 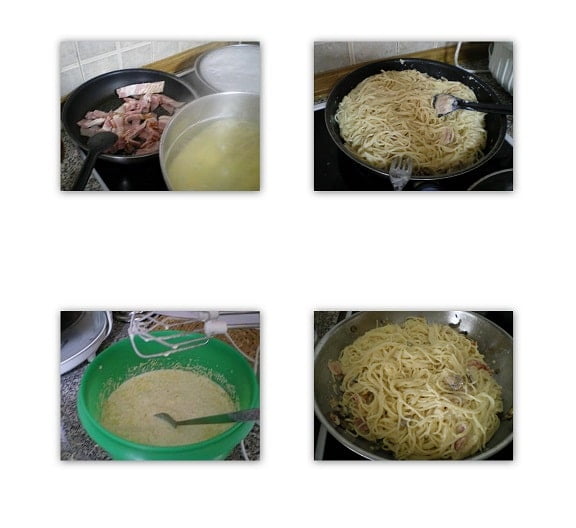 How do you make Lazagna?

I was reading your blog and it reminded me of the experience I had yesterday in my university. They made me go there just to tell me that I was not eligible for a paper. They could have told me so when I requested this paper. So I had to spend one hour on the road to go there and one more hour to get back home for no reason....!

Ivy, you're very efficient cook! It seems that every family meal I prepare is done at the pace you worked at today. :-)

Hi misslionhear, thanks for browsing at my site. One of the reasons I didn't get one until now was because it always frightened me to have one around in the house.

I have a very sharp knife I keep tucked away from the children. It's the best piece of equipment I have in the kitchen!

Your post made me laugh - not because it is funny, but because it perfectly described virtually every experience I've had with the Greek bureaucracy. I usually budget 2 days to get anything done, so I can feel happily surprised when I get it done in one full morning. Αλλά -- τι να κάνουμε;;;