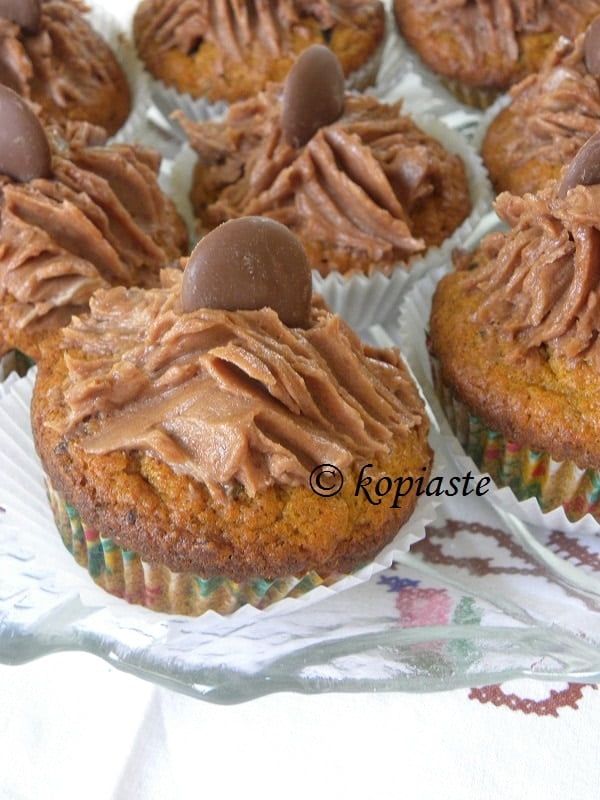 As this month is the month of Halloween, Baking Partners chose as there theme to bake Cupcakes or Muffins with pumpkin.

We had three choices but I chose to make Pumpkin chocolate chips Muffins from Joy of baking  which in its turn was also  adapted from  Baking from the Heart, a collaborative cookbook with Michael J Rosen, a recipe suggested by Reshmi of EasyCook.

I’ve been doing some research trying to understand what the difference between a muffin and a cupcake is?  I found lots of contradictory information on the web which made things even more confusing.  I wanted to add a frosting on my muffins.  Would that make them cupcakes?   If you put muffin batter in a cupcake mold does it become a cupcake? or if you put fruit in cake batter and into the cupcake mold does it become a muffin?

I made the question on the forum of Baking partners but did not get a reply, so I asked the same question on my wall on Facebook.  I would like to thank my friends on Facebook for joining the conversation and clarifying this issue.

I followed the recipe of Joy of Baking but I do not see how this recipe fits to be a muffin.  It has fruit in it, in this case the butternut squash or pumpkin but I looked at Cupcakes with zucchini, by Martha Stewart and it’s the same thing, although this time Martha Stewart uses vegetable oil and does not cream the sugar with the butter as would be the case for cupcakes.

As I mention in my previous post, I made these muffins last week.  Instead of using pumpkin, I used butternut squash which I brought a with me from Assini.  Our plans were to stay here for a few days, which however changed for some family reasons.  I was planning to make them when we returned, as most of my baking equipment (scale, measuring cups and spoons, piping bags etc) are there.  I do have some basic equipment here as well which my children use when cooking, so fortunately I had a hand mixer and muffin tins.

I found a coffee cup which I estimated to be around the size of a measuring cup and that was used as my guide for the recipe.   My experience in baking helped as well.

I made a few changes to the recipe.  Instead of using canned pumpkin, I used fresh butternut squash which I had roasted and I preferred to use cane sugar instead of crystal sugar as well as fresh ginger.  Furthermore, I also added cocoa powder and carob syrup.   Since I added cocoa in the muffins and I wanted to add a buttercream frosting on top, I made mine, using cocoa and carob syrup, which was forgotten in the closet.  Carob syrup has a chocolaty taste and apart from adding colour to the batter, it also adds wonderful taste.

My husband did not find any chocolate chips at our local supermarket, so instead I chopped and added some chocolate into small pieces.  Later on when we went out, we found some  chocolate chips and I bought a 750 grams packet, as in any case I wanted to take it with me as I could not find them at Nafplio.  When I returned and opened the package, they were huge, so I used them to decorate the muffins. 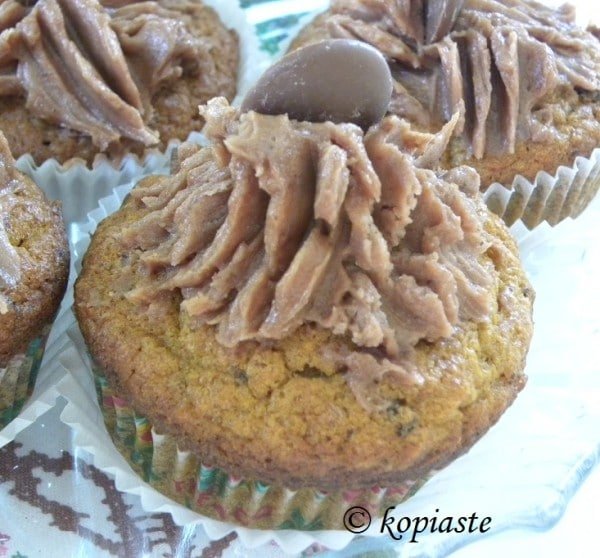 Here is how I went about:

I measured the ingredients with the coffee cup, including about 40 grams cocoa powder.  I then sifted the dry ingredients.

I whisked the butter with cane sugar and added the eggs one at a time, the carob syrup and grated fresh ginger.  Then I lowered the mixer speed and added the sifted dry ingredients, alternating with fresh roasted butternut squash.  I finally mixed in some finely chopped chocolate.

The recipe called for ¾ cup pumpkin puree.  I measured that in the same cup and when alternating the puree with the dry ingredients, the consistency of the batter was right and still there was a lot of leftover flour, so I continued adding more flour and butternut squash until all the flour was used.  I don’t know what went wrong but although the outcome was wonderful, I ended up with 18 muffins or were they cupcakes, as they were light and fluffy. 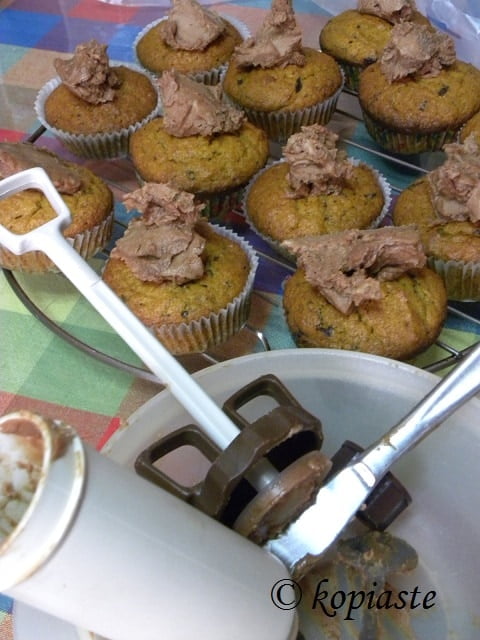 I tried to add the buttercream frosting using a very old piping gadget.  Unfortunately it would not come out, so I removed the frosting from the gadget and put it on the muffins with a e spoon. Then I used a fork to make a pattern and finally I decorated the muffins with milk chocolate chips.

Note:  In the recipe below, I have kept the original measurements and just adjusted the ingredients  which I have addded and/or changed and are marked in red .  I do not think that the addition of the extra cocoa powder, the fresh ginger and the carob syrup will affect the consistency of the muffins/cupcakes. 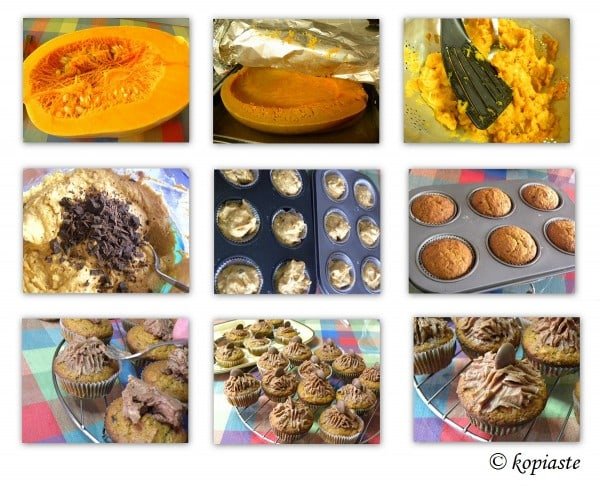 Recipe by Ivy adapted from Joy of Baker 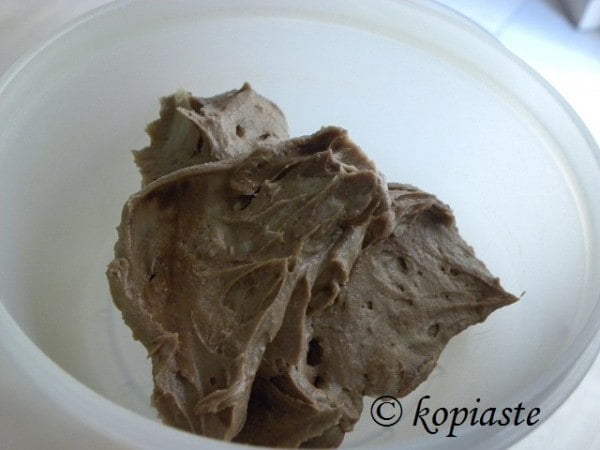 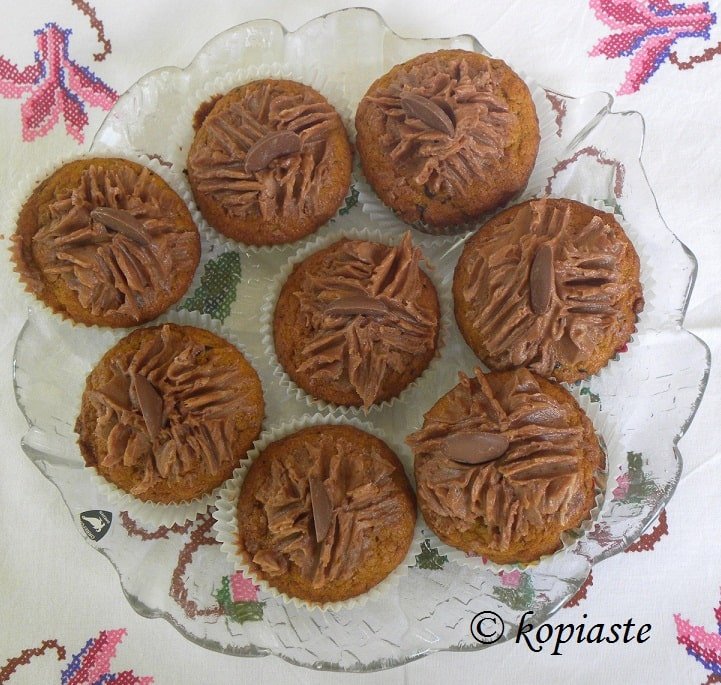 Tasty appetizer. Unfortunately, I'm on a diet, and such miracles do not come into play: (

These muffins with butternut squash sounds amazing and I am loving the frosting too!

Very original and so tempting! I love the flavor of carob.