Here we are again with another roundup of Creative Concoctions, with savoury recipes using olive oil.  Thank you all of you for participating with your wonderful, creative recipes.

Meenakshi, of  Ponderings of a Working Mom, has made a healthier version of  Dal (lentils) – (oriya ishtyle) using olive oil.  In India food is usually cooked with ghee but Meenakshi has been cooking with olive oil the past three years, in order to control her cholesterol levels. Eftychia, of Dream of Cakes, has made a traditional Cypriot recipe, called Halloumopita (a savoury cheese cake) making a lot of changes to the original one.  Efti has added puff pastry, semolina and yoghurt which are not included in the original recipe. a) Savoury Bell Pepper & Broccoli Cake:   As Priya tells us this is a savoury cake she makes often and you can add any vegetables you want and serve it with a salad for lunch or dinner. 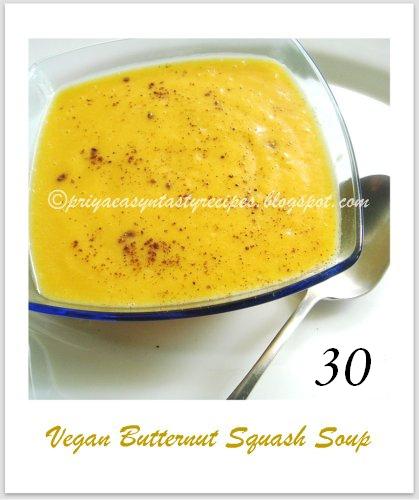 c)  Another recipe by Priya is a twist to Mexican Quesadillas, filled with Spinach, Sweet Corn and Mushrooms. Rinku, of Cooking in Westchester, had made Tandoori Shrimp Bruschetta.  Rinku has mixed the Indian flavours of Tandoori and combined it with olive oil on Bruschetta, to make this wonderful appetizer. 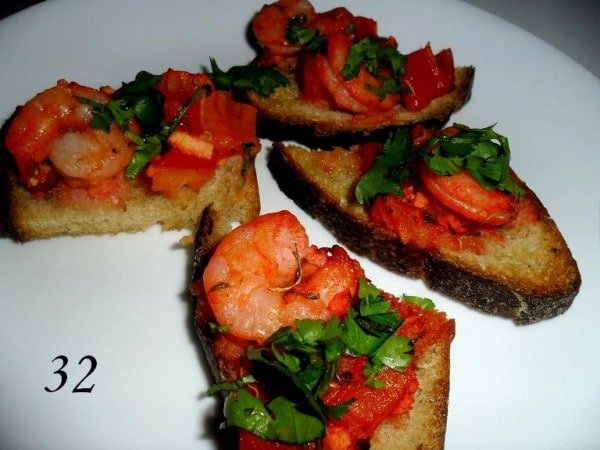 Eftychia, of Dream of Cakes, has made another  Cypriot recipe, called Koupes.  Koupes used to be a street food, reminiscent of the Middle Eastern Dish called kubbeh or kibbeh or kibbe but now it is served as finger food which is perfect for parties. 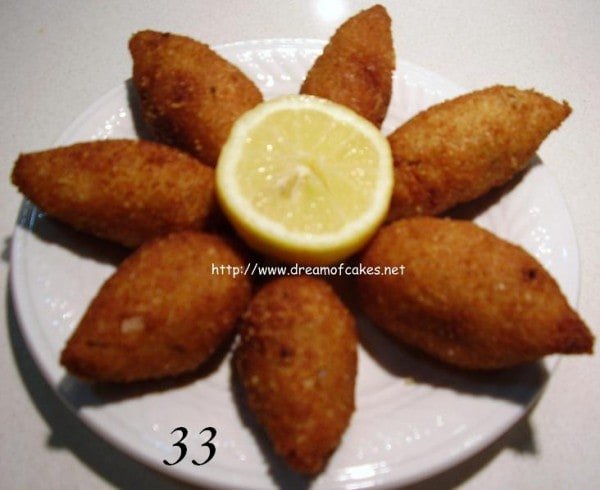 Rosa, of Rosa’s Yummy Yums, has made Eggs with Asian Style Galangal and Rhubarb Vinaigrette.   Rosa created this recipe with ingredients she had in her pantry, including galangal a rhizome in the family of ginger as well as a rhubarb vinaigrette. Finally here are some of My Recipes, making use of my preserved beetroots:

Beetroot Salad and Beetroot Dip:   Based on a Greek beetroot salad, usually made with boiled beetroots, cut into small cubes, garlic, yoghurt and olive oil I made two different recipes:    Beetroot Dip: I made several changes, using preserved beets, which of course have vinegar, added feta, which makes it extra creamy and agourelaio, with its fruity almost bitter taste, which brought this dip to another level.  I added all these in a food processor and made it into a dip.  The other recipe is the last one. 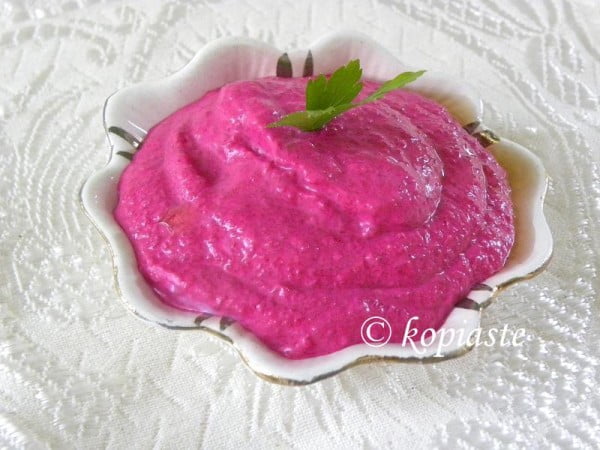 Beetroot Salad: The salad is a tweak to “pantzarosalata”, a beetroot salad my mother would always make in which I added yoghurt, garlic, fresh coriander (cilantro) and agourelaio. 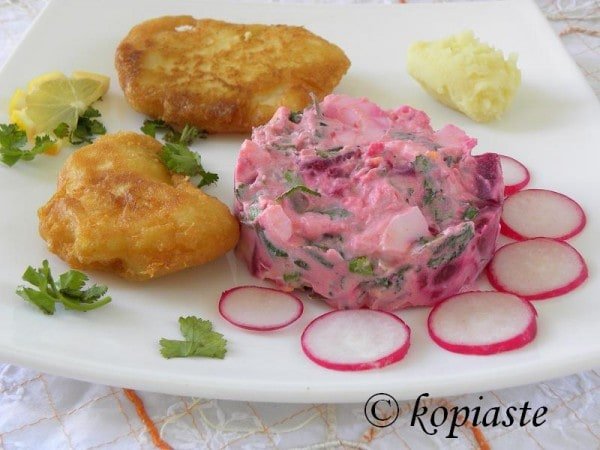 Beetroot Walnut Salad:   This salad is again based on the beetroot salad made here in Greece.  My tweak was to make it with preserved beets,  added mint pesto, mustard and agourelaio. 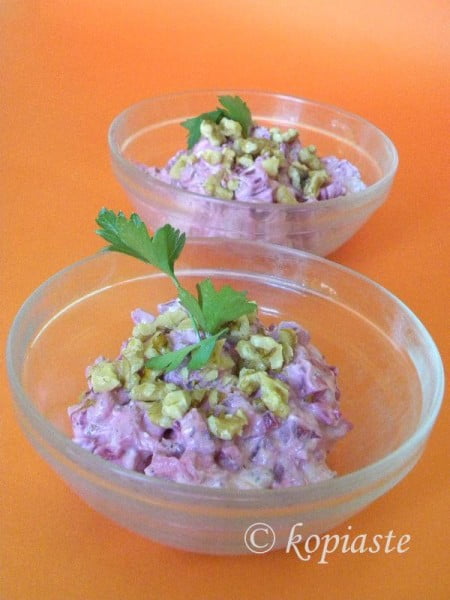 I wish to thank Elais once again for providing the Extra Virgin Olive Oil as well as all of you  for participating.  Please head over to the side bar for the Voting and vote for the most creative recipe made using olive oil.  It may take a few seconds to show the poll, which is just above google translator.  The poll will be open for voting for 48 hours starting from now, so you can also tell your friends or readers to vote for you, and the two recipes with the most votes will receive a 1 litre bottle of Greek Extra Virgin Olive Oil.

These recipes will also enter into a random.org selection for another giveaway when the number reaches 100. I have the pleasure to announce that Rosa and Eftychia got the most votes.  Congratulations to both of you  for winning and please send me your full address by e-mail.

It is such a nice event! I'm sorry I did not manage to post anything this time, but congratulations to all who submitted their dishes - they are fantastic!

A very nice set of recipes and a great roundup. I feel pretty bad about missing the deadline. For some reason I got into my mind that it was the 27th. Being on a long car trip has scrambled my calendar. I must do a better job next time. My recent post frittata con le zucchine

They all look so wonderful....always a great line up :) My recent post Whats for lunch Languedoc Style Tuna Salad Sandwich for a Gourmet Picnic