Kifylla is a sweet bread, filled with raisins and glazed with sugar on top and it used to be sold in Cyprus in the central streets, in wheeled carts.

This is one of the recipes included in my cookbook and in the pdf I had uploaded on Createspace for the members to take a look inside.

While I was expecting the proof to arrive from day to day, a few days before the book was published I announced an event so that you could go and take a look inside the book.

I was afraid to offer my book as a giveaway as I was feeling insecure that it would not meet my expectations, so I offered  a cookbook by Tessa Kiros, just in case that I would reject the proof.

Now that I have the book in my hands, if the winner prefers my book, this can be arranged and I can send her mine.

Fortunately enough, everything went smoothly and now the book is selling on Amazon.

Isn’t that amazing?  I still can’t believe that my book is on Amazon!!

When I announced the event, I was craving these sweet bread and as I wanted to show how someone can become creative using a simple recipe, the only thing I had at home  were 2 apples and pears, so I decided to try filling them with the apples.

The dough was prepared as in the book but this time I used butter instead of margarine.

I prepared the apples the same way we make apple pie.

I cut them into small pieces in a Pyrex, added brown sugar, cinnamon and butter but cooked them in the microwave, adding a minute each time until they were soft.

It took six minutes on high to cook.  A lot of juice came out of the apples and draining them was not an option, so I tried to find a way for these juices to be absorbed.

After thinking for a while, I dissolved corn flour with a little milk and added it to the baked apples and back it went into the microwave for 1 more minute.

The corn flour absorbed the remaining juices and it became like a cream with apples.

The remaining procedure was the same.

I rolled out the phyllo which I brushed with butter and sprinkled with cinnamon and brown sugar and added a tablespoon of this mixture in the centre.

I then folded the four sides of the phyllo to form a parcel.   I flipped them over and placed them in a well buttered tart pan.

I brushed them generously with butter and sprinkled some brown sugar on top and some cinnamon.

The butter and sugar melted and formed a thin layer of caramel both on top and inside.

Just a minute before removing them I added a tablespoon brown sugar, a pinch of cinnamon and enough water just to wet the sugar in a bowl and mixed to combine and brushed the bread on top and baked them for another minute.

Note:    You can add some raisins in the apple filling but I didn’t as my daughter doesn’t like raisins.

The filling was not enough to fill them all, so the ones in the centre are without filling.  If you make this recipe add 1 more apple.  You do not need to adjust the remaining ingredients. 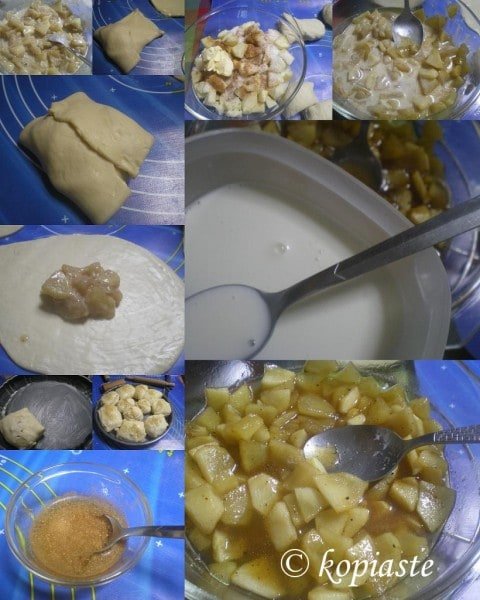 This time of the year is not the best time to organize events as I know that we are all very busy baking so many other Christmas cookies and cakes and it doesn’t matter that I only got two entries for the event.

Irine Sakellaraki, who lives in the U.S.A.  is not a food blogger but is a reader of my blog and sent me this picture of kifylla, through flickr together with this note by e-mail:

“I don’t have a blog. What I did was take the basic kifylla recipe in the book and flavored the dough with a little bit of mastixa. Then I mixed cardamon, cinnamon, sugar and a pinch of allspice and used that to dust each roll. I added date bits instead of raisins and then baked and glazed according to the recipe. The house smells great and the buns were a hit with my friends!” 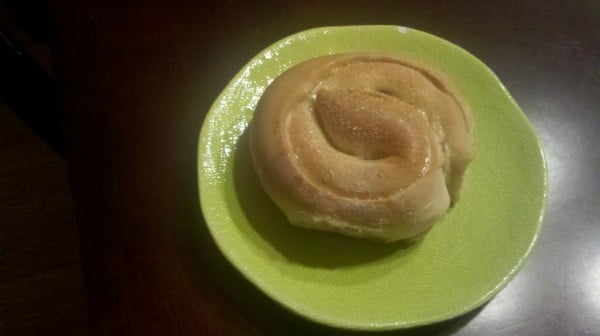 Lisa Henderson, lives in Austria and we became friends through a social network about 3 years ago.  I convinced her to create her blog but after giving birth to her fourth child, she did not find any time to blog, so she gave up blogging.  Yesterday when she decided to post her recipe just for me,  she couldn’t log into her blog.  She e-mailed me asking me what she should do until she communicated with wordpress and we came up with the solution to post the picture on Foodbuzz.  This is what Lisa wrote:

“The children don’t like raisins, so instead of adding sugar, cinnamon and raisins, I added, tahini, honey and cinnamon.  These are so healthy, not a trace of fat in them and they tasted heavenly. The children loved them and I will be making them over and over again.” 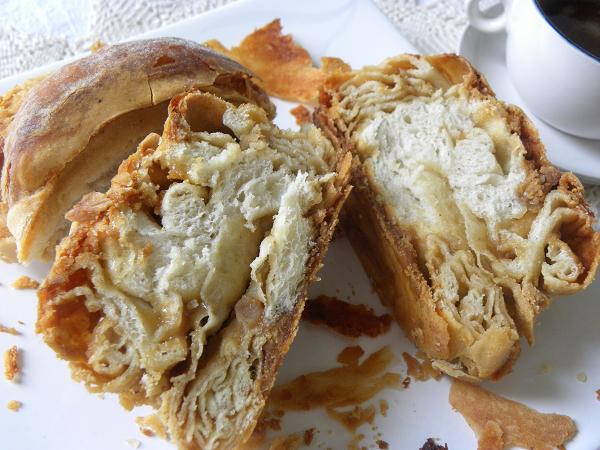 Both entries were very creative and please take a few minutes to vote for the the one you consider the best.  There is a voting widget on the side bar and you can begin voting right away until tomorrow midnight.   I will announce the winner on Saturday morning (Athens time).

Thank you Irene and Lisa  for participating and good luck to both of you.

That's so exciting for your book. Congrats! My recent post My blogging family- Engineer and an Oven

Kifylla sounds amazing, and I love the both versions, I gotta vote for the one with Mastixa :)

I am voting for the tahini version, because I adore that paste. Anyway, both look wonderful.