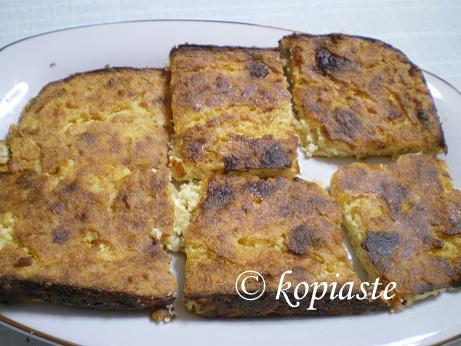 Today is a day we celebrate in Greece by cooking or baking anything with cheese and so it is called Tyrini (tyri = cheese) and as it is always on a Sunday we call it Cheesy Sunday. Just like carnival is celebrated by eating all the meat before lent (carne levare meaning remove all meat) the last day before lent we have to clean out all the dairy products so as from tomorrow and for forty nine days according to Orthodox religion we have to abstain from eating meat and dairy products.

In Cyprus some of the dishes we usually prepare on Tyrini are ravioles and flaounes.

I have written about these two dishes in the past but as I prepared them as well today, I think it was worth mentioning them as they were written when I started blogging and I am sure most of my blogger friends did not have the chance to see them. We all love ravioles in my family and as the children were asking me to make them, there was no way I would not make them today for them.

The only thing I changed from the traditional recipe was to give them a different shape. I cut round circles with a mold, added the cheese filling in the middle and folded it to form a half moon. Then I joined the two ends and then the one on top. All the rest was the same.

Yesterday I visited a Greek site called Cook the Book which is written by a friend of mine who lives in Agrinio. I saw that she had made trahanopita, a pie which is a bit unusual even for us in Greece. Its main ingredient is trahanas, which is cracked wheat boiled with milk and it is then dried and preserved and used mainly to make trahanas soup or savory pies. I had heard of trahanopita on cooking shows but have never eaten it before so I thought it would be both appropriate for today as the other ingredient used is cheese as well as for an event called Live Strong with a taste of yellow.

Live Strong with a taste of yellow, 2008 , hosted by Barbara, of winosandfoodies.com, is an event about sharing cancer experiences and telling stories of their support for their friends or family experiencing cancer.

This year a second element has been added to this event which is a photo competition. So, if you haven’t heard of it yet you still have a lot of time to prepare something for this event.

I am sure that each and every one of you have suffered the loss of a relative or someone close to you who have been hit by this illness. Personally, my father-in-law and brother-in-law died of cancer.

The food we have to prepare for this event must be yellow and my main recipe as well as the other ones I have prepared today are all yellow.

I have not changed anything from my friend’s recipe except the trahanas I used was Cypriot and this might have changed the taste a bit. I only had 200 grams of feta, so I added some halloumi cheese as well and I did not use as much of butter or margarine as stated in the recipe but merely used 1 teaspoon of butter in the cream and for greasing the tin. However, this savory pie was delicious.

If you would like to make this pie, I am sure you can find trahanas (ask for sour trahanas) at stores selling Greek or Cypriot Products. 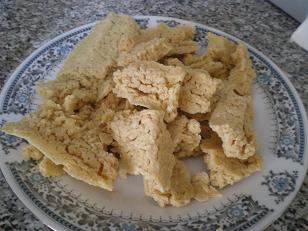 This pita can be made like tyropita by using either home made phyllo or store bought.  In each case, each phyllo 5 – 6 layers, should be brushed with butter, then the filling is added and another layer of 4 – 5 buttered phyllos and baked until golden brown. 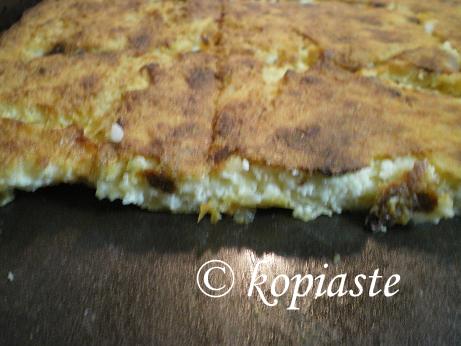 Thanks Barbara for organizing this and I hope that you had a lot of participations.

Hi Ivy, I'm sorry I haven't been by earlier to say thank you for supporting LiveSTRONG With A Taste Of Yellow.Cheesy Sunday sounds like celebration I would like.

Hi there Ivy...love the window to raditional food that you've opened. Amazing to discover there's so many facets to food! This does sound great, & is a beautiful etry for Barbara's. I'm waiting for my Livestrong band, & then will set to work. I loved your Cheesy Sunday! Have a GREAT day!! Lol

Hi Ivy, it is so lovely to learn about your traditional foods!! :D Great to read about Cheesy Sunday too.. As cakelaw says and I second your trahanopita and your ravioli, just look divine!

Thanks for the info on Cheesy Sunday - it was very interesting. The trahanopita looks good - and your ravioli, just devine!