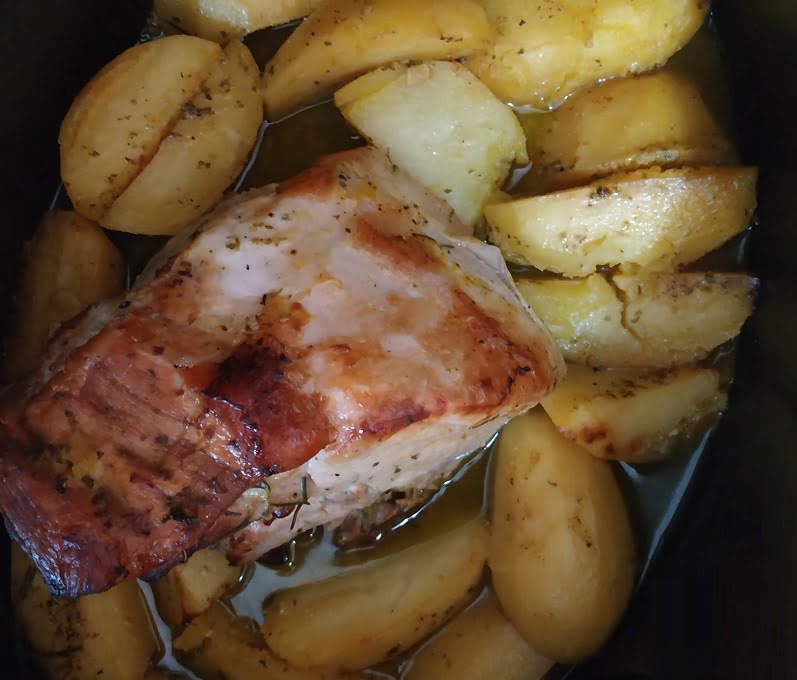 An amazing recipe for tender and juicy pork rib chops. The marinade will make the  pork chops extra juicy as well as infuse them with great sweet and sour taste flavour and a touch of citrus.

For this roast, I used pork rib chops which I cooked in a gastra.

Marinades make meat tender and juicy and infuse some flavour.

Two to four hours is enough to marinate a large piece of pork.

I prepared the marinade in the morning and added the meat.  I left it in the marinade for an hour while taking the dog out for his morning walk.

When we came back, I turned the meat on the other side and left if for another hour, while having breakfast.

In my marinade I used honey, mustard, garlic, rosemary, olive oil, orange juice, lemon juice and vinegar.  I added a little bit of salt (about 1 tsp) and some freshly grated black pepper.

The marinade tenderized the meat but also imparted a sweet and sour taste both to the meat and the potatoes.

These are the ingredients my family loves in Greek marinades but you can play around and add other acidic ingredients, other fat (oil), other spices or other herbs.

What is a gastra?

In Ancient Greece “gastra” was a food preparation concave utensil.

This specific cookware was also indispensable for transhumant shepherds, particularly the Sarakatsani, who moved extensively all over the Epirus Mountains and lowland pastures, exchanging their dairy products with wheat, corn, flour and salt.

With these simple ingredients and a pan on coals, covered by the all-purpose gastra, namely a metallic lid that converts a simple pan to an improvised oven

They did not only cook roasts in a gastra but also made bread, pies as well as desserts.

The gastra of the photo has a diameter of 65 cm and was made of tin.

The gastra in the photo can be found at the exhibition hall of the Cultural Association “Fraternity of Epirotes Sarakatsani in Athens”.

The photograph was taken by Pavlos Katris, member of the Cultural Association “Fraternity of the Epirotes Sarakatsani in Athens”.

The gastra was a primitive, all-purpose, mobile oven, a concave tin structure which had a handle so that it could be lifted, the so called xithali, or moved around when it was not hot.

Below the handle there was a metal hoop to keep the ashes and coals warm.

In the house’s “corner”, usually tiled, to keep the temperature constant, the housewife would stoke and light the fire with branches that burn quickly and produce coals in a matter of minutes.

The gastra was placed on top of the fire its tin becoming red hot from the burning fire.

When the fire diminished the housewife would then clean the “corner”, and place in it the oven dish with food or bread, covering it with the gastra; ashes and burning coals were put around and on top of it, sealing the mobile oven.

Cooking was slow and thorough in this contraption and, as a result, it produced delicious dishes.

Modern gastras can be made of cast iron, metal, fired clay or earthenware or even plastic.

My first gastra was a Tupperware casserole dish but since we moved to Asini, I keep it there, so in Athens I bought a new metallic one.

During the winter, we usually stay in Athens for a fews months.

It’s not easy bringing all my cooking utensils back with us, so here I have a larger, metallic one, the one you see in the video.

You can use any roasting casserole dish with a lid or a Dutch oven.

However, if you don’t have either one, use a regular baking tin and cook it under an aluminium tent.

After marinating the meat, drain the potatoes and put them in the gastra.  Season with salt, pepper and oregano.

Position the oven rack to the lowest position and preheat the oven to 200o C.

The gastra is quite high and occupies almost all the capacity of the oven.  For this reason, I use the air to cook it, so that the air cooks it evenly.

Add the meat on top of the potatoes and pour all the marinade on top.

Cook it for about one hour and fifteen minutes.

Then turn the meat and potatoes over.

Be careful when removing the lid because you may burn your hands with the hot steam.

If you see that the potatoes are sticking, add the water, close it with the lid again and wait for about five minutes.

The potatoes will loosen so that you can turn them over.

After turning them over, cover again with the lid, lower the oven temperature to 180o C and bake for about one hour.

If you have a meat thermometre when the temperature reaches 70o C / 158o F, the meat is cooked.

Remove the meat on a cutting board and let it rest for fifteen minutes.

From the leftover juices, you can make the gravy.

Put the gastra back in the oven and turn off the temperature to keep the potatoes warm.

If you try to cut the meat into slices while it is still hot, it will fall apart.

You can warm leftover rib chops in the microwave if you like but it’s delicious cold as well.

The meat is very lean, so there is minimum fat melting in the juices.  You can use the pan drippings to make the gravy.

The leftover meat is great in sandwiches or inside a pita bread, with some Greek Salad and Tzatziki!

I whisk the sauce until it thickens.