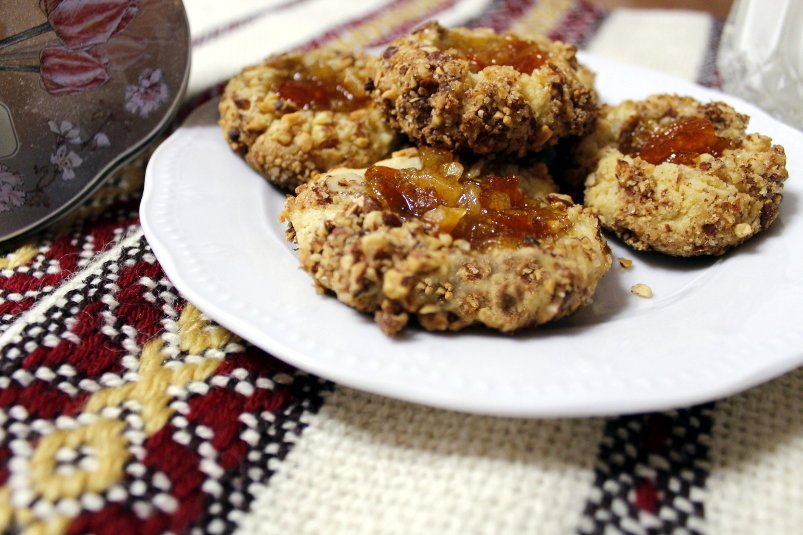 An easy recipe for a variety of delicious Almond Cinnamon Thumbprint Cookies with a video tutorial to help you make these cookies.

The base of these cookies is a buttery, aromatic shortbread which are usually filled with jam but they are so good why only add jam?

They can be transformed into something different each time by changing the flavour or filling them with a different jam, marmalade, lemon curd, chocolate ganache, dulce de leche, etc.

I based my recipe on my Shortbread Cookies but they can be made with brown sugar instead of icing sugar.

These cookies were named thumbprint because they would make an indent with their thumb before baking and then add the jam when they were baked.

I make the indent after they are partically baked.  However, it would not be wise to use your thumb while they are hot, so I improvised using something metallic to make the indent.  The first time I used a spoon, then the valve of my old SEB pressure cooker and then I remembered my pestle, which is the most practical. 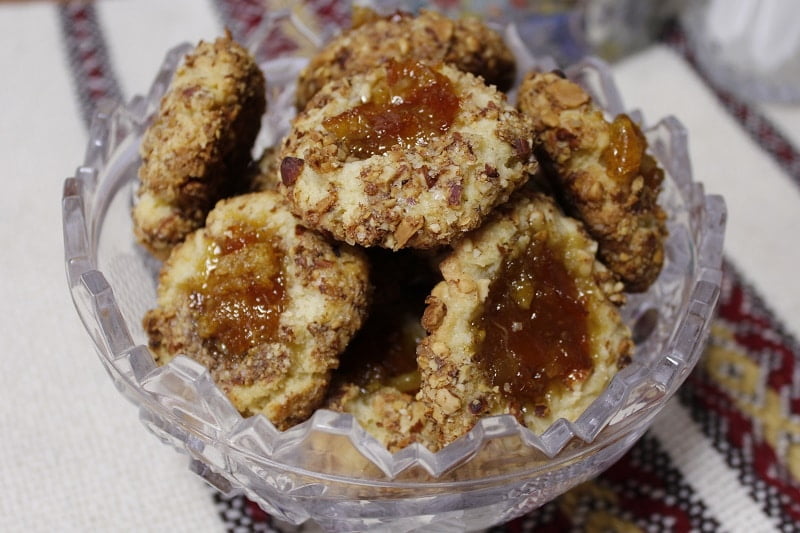 I’ve made these cookies many times with different jams or marmalades or chocolate.  I’ve even made them vegan.  Depending on the jam, I added a different flavour.

For one batch I used kumquat jam which I made in February and for another I made a mixed citrus jam using the two bergamots which were the first to grow on our bergamot tree.  Oh, they smelled and tasted soooo good!  For those I used citrus essence.  I made another batch with quince preserve and for those I used some raspberry essence.  For the chocolate ones I used coffeee essence. 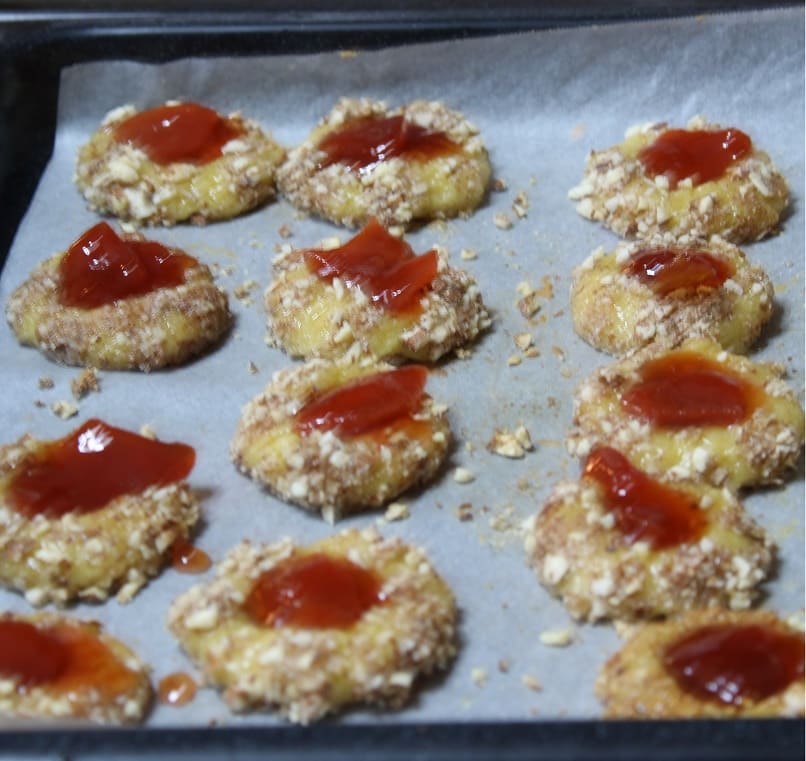 I made these cookies when we were in Athens and as my oven is old, I never use the air when baking, so I had to bake the two tins separately.  However, if your oven can bake using the air, you can bake both batches together.  The baking time was 20 minutes for each batch but I know that if I made them in my fan forced oven at Assini, I would definitely reduce the temperature to 170 degrees C, as well as the time by 3 – 5 minutes, depending on their size.

Normal flat cookies take around ten minutes to bake.  However, since these are shaped into a ball, it will take a little bit longer and when taking them out of the oven, it takes about 4 – 5 minutes to add the jam, so their temperature drops.  So when baking them the second time they need a few more minutes to bake.

I usually weigh the cookies to get an even size but I have also used the ice cream scoop, which however makes very large cookies but in you can cut the scooped cookie dough in two and then shape them into balls.  It doesn’t make a big difference if they have a couple of grams more or less.  To make small ones they weigh from 20 – 23 grams each and they yield around 40 – 42.  For bigger ones which weigh 30 – 32 grams each, I get around 35.

After weighing them I form them into balls.  I quickly whisk the reserved egg white and add some citrus blossom water in the egg, which is optional, but adds more aroma.  I wet them with the egg and dip them in the almonds.

I then put them in the fridge for at least half an hour for the butter to harden again.  You can definitely make them a couple of days ahead and bake them whenever you like.  This is a crucial step as if not refrigerated the cookie will not hold its shape and will become flat. 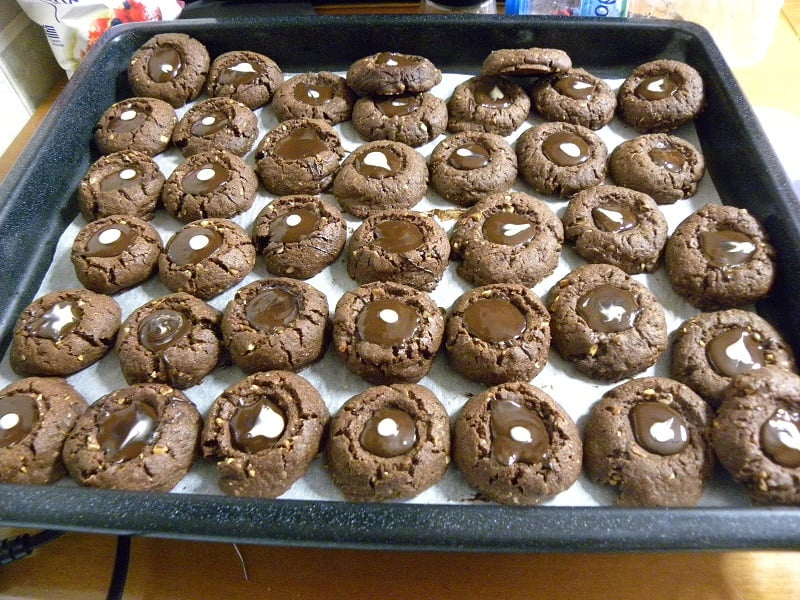 One day I decided to make these cookies again but I had only 90 grams of almonds.  I did not have time to go and buy more almonds, so instead of coating them with the almonds,  I decided to improvise and make something different.   The cookie dough was made the same but I substituted 40 grams of flour with 40 grams of unsweetened cocoa powder.  I added less icing sugar and subsiituted the remaining with cane sugar and a little bit more.  I used only one large whole egg in the batter and when the dough was ready I mixed in the almonds.  When I baked them, I melted some chocolate and filled them. 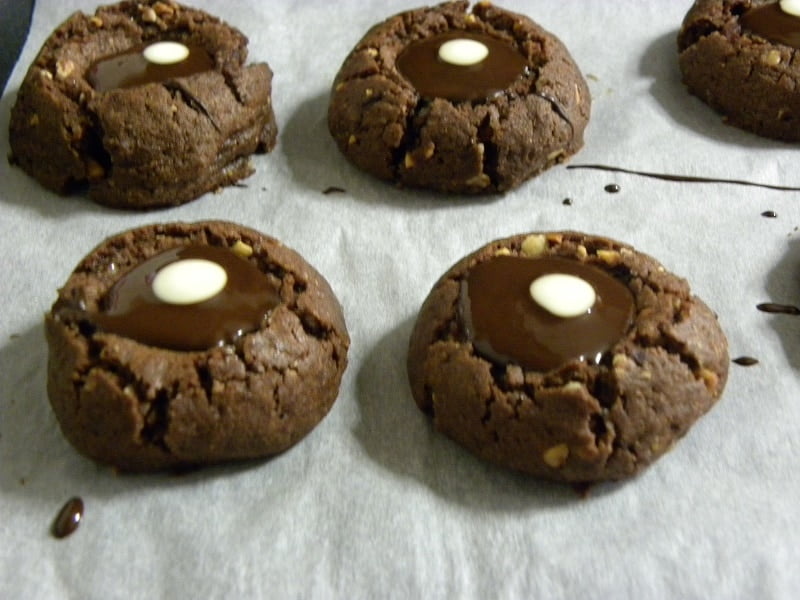 Note:  You can see a white dot in my chocolate cookies.  I added a drop of heavy cream in the middle of the chocolate while it was still warm and with a toothpick I tried to make different designs.  One of them was this heart! 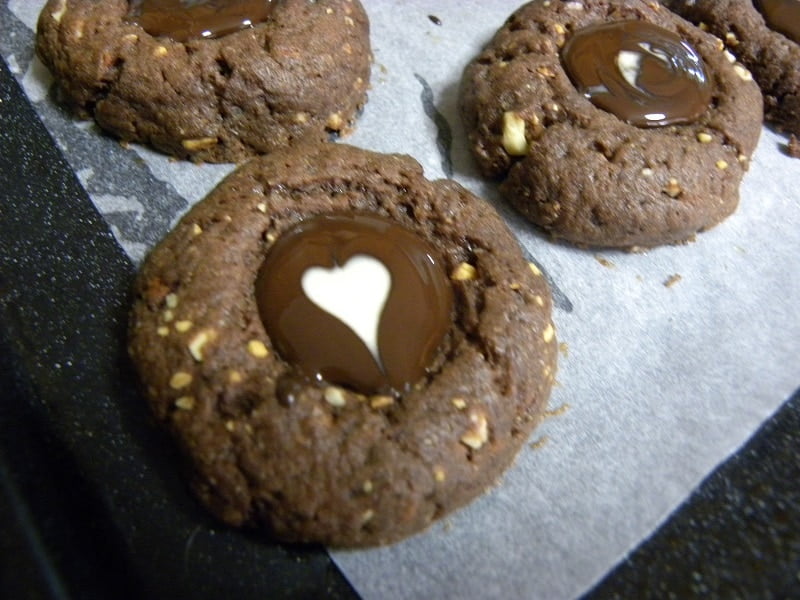 I made these vegan olive oil thumbprints for Lent.  As I make a lot of marmalades, this is a great way to use it.  I used a mild extra virgin olive oil with a fruity taste.  However, if your olive oil is strong add a part of olive oil and substitute the remaining with vegetable oil.

I started with the fluid ingredients and then added the flour until the dough was of the right consistency.  At the end I weighed the leftover flour to see how much I used.  This makes around a hundred cookies but since Lent is almost 50 days they disappear in no time but if you still think they are too many you can always  adjust the recipe to make half the amount or give some to your friends and relatives, who will surely appreciate your gesture!

Less almonds are needed than the previous recipes as I did not wet them before.  However, if you want more almonds, you can wet them with more citrus water or with mandarin juice. 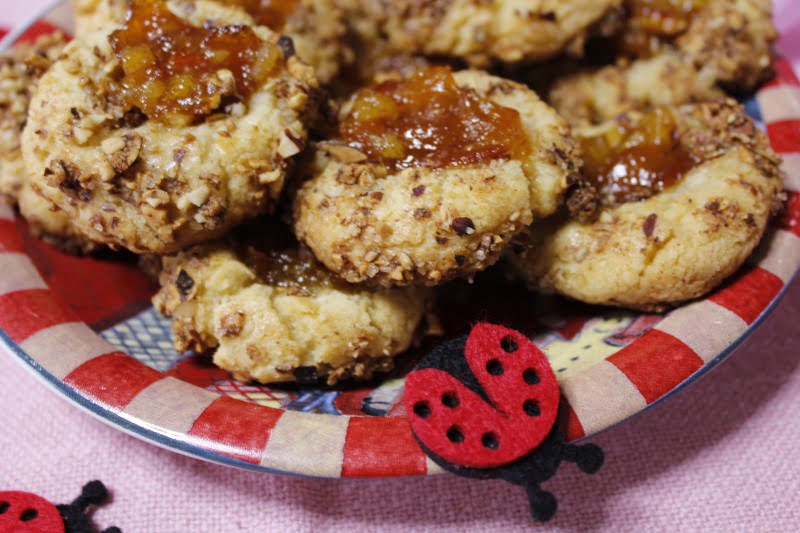 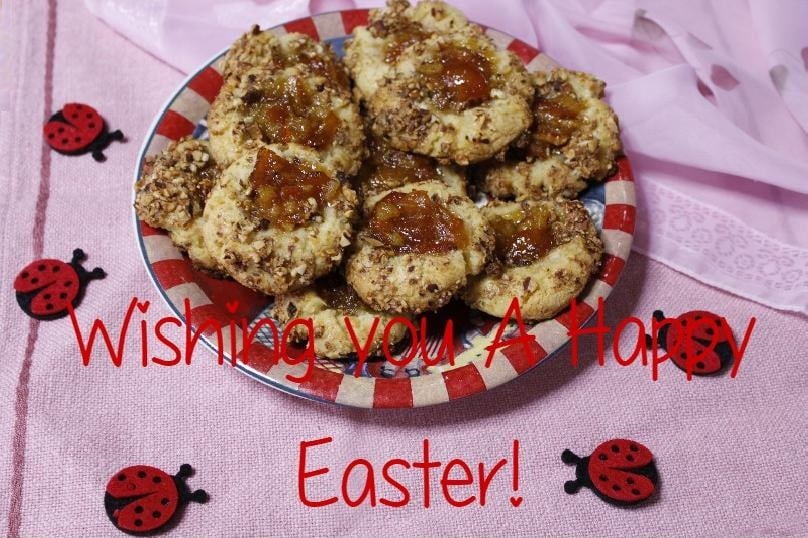