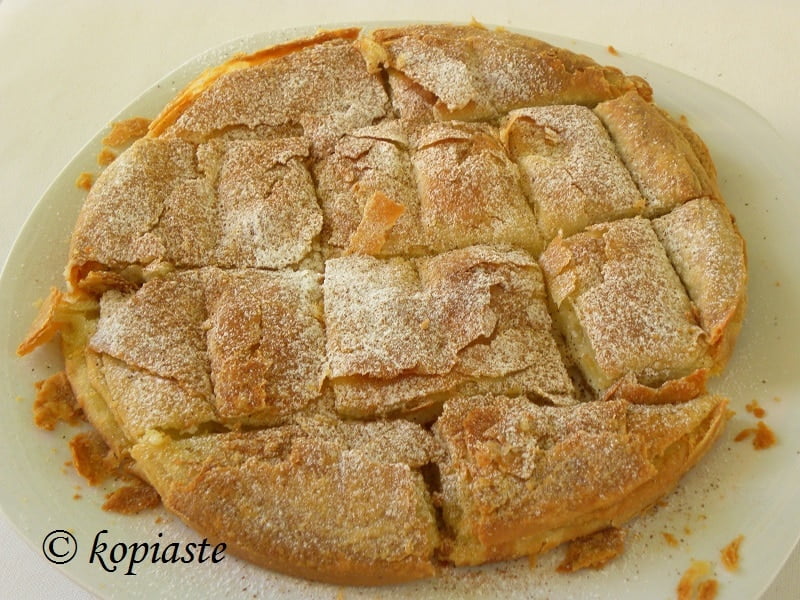 Bougatsa is a Greek pastry filled either with a semolina custard, cheese or minced meat.

Bougatsa has its origins from the Byzantine period (before the fall of the city in 1453), when Constantinople was still Greek and was famous for its plakountes, which meant flat and when these were later taken by the Romans  were called placentae.  The word bougatsa is also connected with focaccia, as mentioned in Ottoman dictionaries but if you read about focaccia you will see that facaccia had its origins from the Ancient Greeks.  Bougatsa originally began as a dough which was stuffed with different fillings.   Bougatsa dough then evolved into a hand made phyllo which was rolled out up to a certain extent and then it was tossed in the air and becomes very thin.  It is then stretched further on the counter and is used to make  pastries which are called bougatses and these can  be either sweet or  savory.   It can be made with a sweet semolina cream or the savory ones with feta cheese, with minced meat, with spinach, with potato etc.

Bougatses started being produced in Greece when Greek refugees from Turkey came here and a lot of them settled in Northern Greece.    It became a speciality in the towns of Serres and Thessaloniki, in Northern Greece but because of their popularity,  you can now find them all over Greece in shops called  “Μπουγατσοπωλεία” (pr. Bougatsopolia) which sell only bougatses. 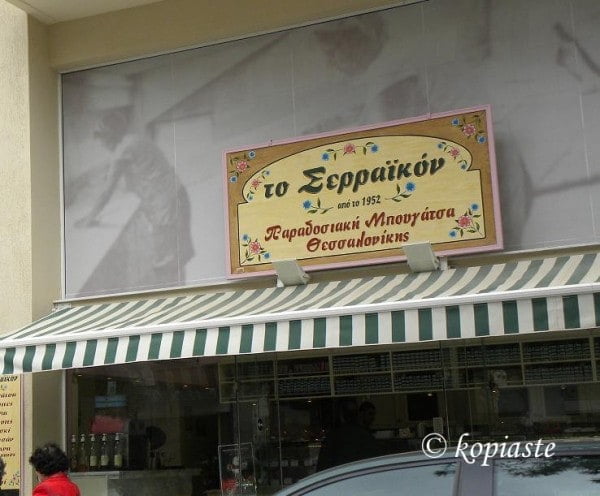 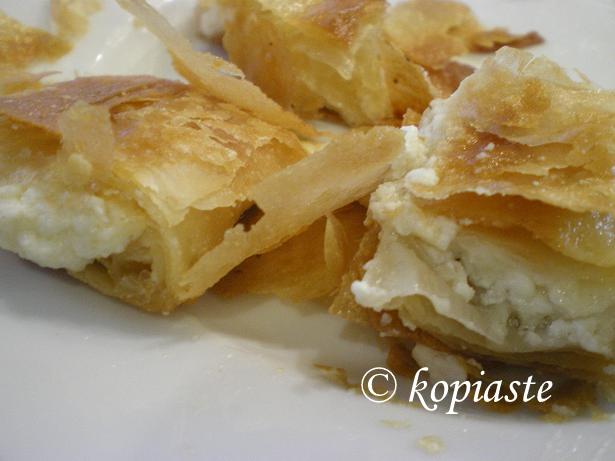 This version of bougatsa calls for store bought phyllo dough, similar to the one used for baklavas or galatomboureko.  Bougatsa has a filling similar to galaktomboureko and when baked, instead of adding syrup, it is sliced and served warm, sprinkled with icing s sugar and cinnamon.

Why we should write “phyllo” and not “filo” or “fillo”

You may be wondering why I have been writing the word “phyllo” in Greek  φύλλο, which means leaf or sheet, in this way.  This is the correct way it should be written because as a rule  Greek words with the letter “φ” (ef = f) when written in Latin or later in English, should be written with “ph” example pharmacy, phaenomenon, photography etc., also the letter “υ” (ypsilon = y) called by the Romans ” y Graecum” and by the French “y Greque”, should be written with Y and not with an “i” example, hygiene, hypothesis, hymne, etc., the letter “h” in front of the “y”   which marked that it was accented with daseia, e.g. ὑμνῶ =  hymn ( a mark or symbol which  have unfortunately been abolished when the Greek language was simplified in 1976 but it is a symbol similar to the French accent grave, to indicate the vocal quality to be given to a particular letter). 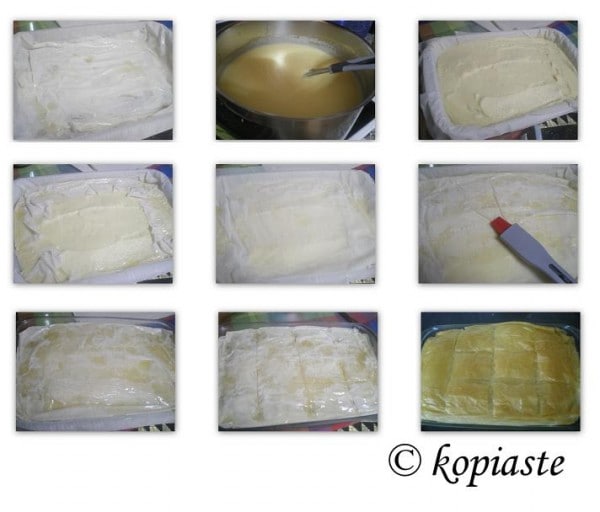 Cinnamon and icing sugar to sprinkle on top

Directions:
Beat the eggs in a bowl and set aside.

Heat the milk, together with sugar, citrus rind, vanilla and butter, until the butter melts.  Add the semolina and start mixing with a balloon whisk.   Add the eggs gradually, mixing continuously, until incorporated and continue mixing until the cream thickens.  Cover the cream with cling film and set aside until the cream cools.

Melt the butter and brush a 28 cm round baking tin (a bigger one would be preferable) or a rectangular 33 x 23 cm Pyrex.   Brush each phyllo with butter and place it in the baking tin.   When half of the phyllos have been added, add the cream which should reach 1 1/2 – 2 cm high, the most.  Fold each phyllo that overlaps the pan over the custard, brushing it again with butter.  Add the remaining sheets on top, folding the excess phyllo and brushing it again with butter.  Trim the last sheet to the size of the baking tin and using a sharp knife score it without reaching the cream.  Spray the top lightly with water. 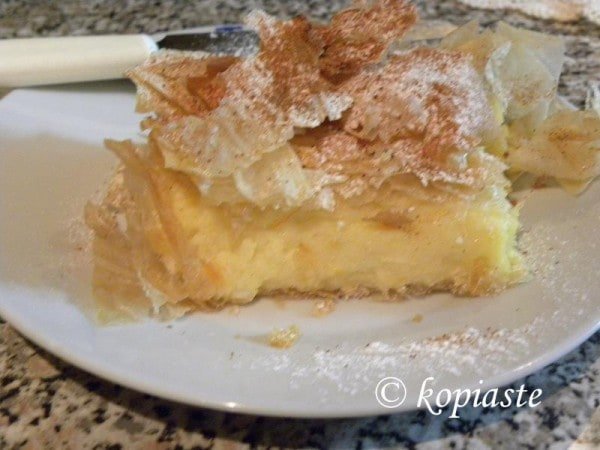 Making bougatsa with homemade phyllo is not an easy job but although I do not have the skills to toss the phyllo in the air, I have managed to make it with a very good result.  The picture below is with homemade bougatsa phyllo which is based on my recipe for Shiamishi. 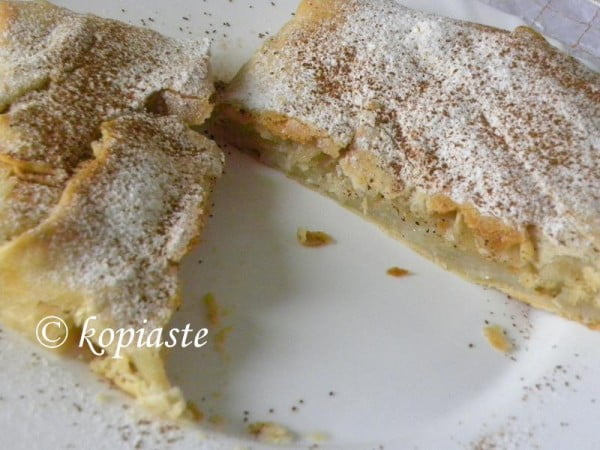 I have made Bougatsa with homemade phyllo several times based on Shiamishi.  Shiamishi (page 120 of my cookbook), and bougatsa have a few similarities as the phyllo is based on the same technique and the filling  is  also a semolina cream with a mastic flavour.

You can make bougatsa as one big pie or smaller individual ones. 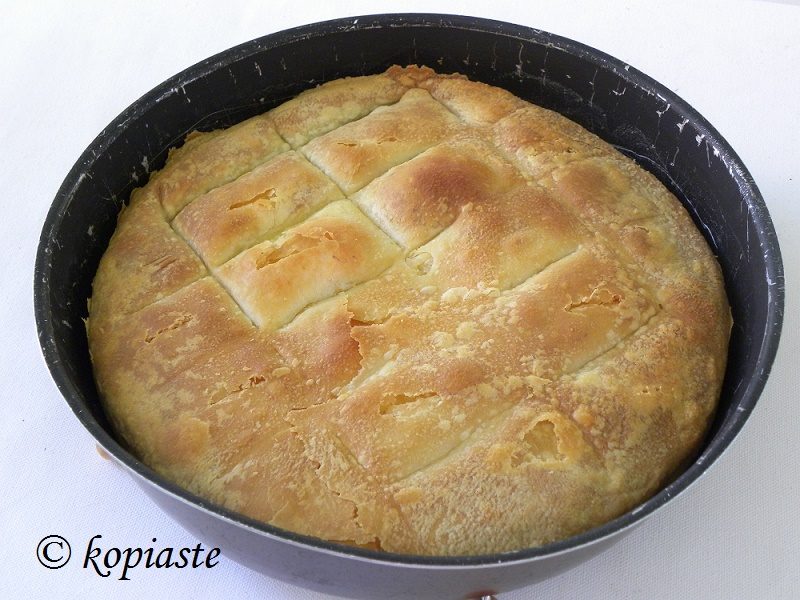 After making Bougatsa many times with a wonderful result, I decided to make a vegan (“Nistisimi”)  Bougatsa, making the cream with coconut milk and using olive oil and vegetable margarine.

Shiamishi Pastry phyllo, made with olive oil (recipe in my cookbook)

Put the water and milk, together with sugar and mix on low heat until lukewarm and the sugar dissolves.  Add the semolina, mastic or vanilla and start mixing with a balloon whisk until it sets.  Mix in the margarine and blossom water until the cream thickens.

Empty the cream in a baking tin or large bowl so that the cream is not higher than 1 cm.  Cover with cling film and set aside until the cream cools.

Roll out the dough, same way as for shiamishi.  Cut a piece of cream and fold the phyllo. Repeat with a second sheet of phyllo.

Place in a well oiled tin. 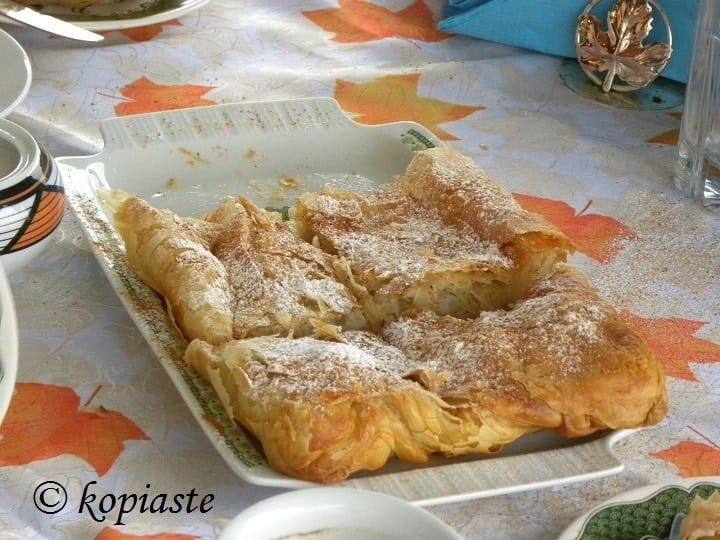 I am linking this recipe to Ancutza, of Matrioska’s Adventure, for her event Ricette con la pasta fillo.