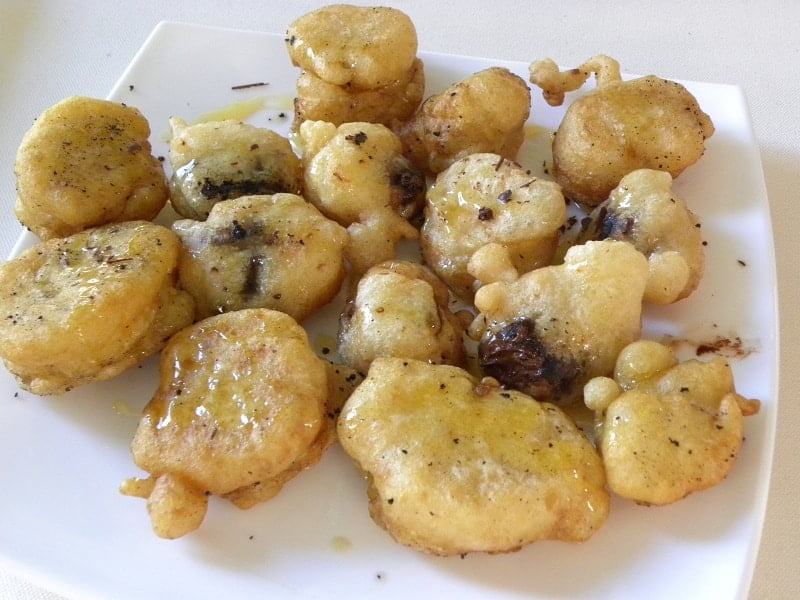 Xerotigana (pr. Ksae-roh-TEE–gha-nah), is a simple Cypriot recipe, made in two ways:  one with flour, baking powder, salt and water to make a thick batter or using yeast.

They are then fried and served with sugar, honey or other syrups, such as leftover syrups from fruit presereves (glyka tou koutaliou) but can also be served with petimezi or haroupomelo.

I made my tweak on this traditional recipe by adding grated fresh ginger and couverture chocolate which I cut into small cubes, which I covered with the batter and fried.

On top I drizzled lots of delicious Greek thyme honey.

They must not be confused with Cretan “xerotigana”, which are totally different.  Cypriot xerotigana are similar to Greek loukoumades but easier to make.

Actually yesterday when I was preparing a yeasted dough to prepare something for dinner, my son said that he would love some loukoumades, but I had so many other things to do that I did not have the time, so he compromised for these xerotigana, which were equally delicious.

Coincidentally, xerotigana are made on the Eve of Epiphany day, to feed “Kalikantzari” who, according to our folklore traditions, are like goblins who live deep down in the earth and cut down the trunk of the tree which holds the earth.

They come up on earth during the 12 days of the Christmas period and make all sorts of tricks to the people.  You  you can read more about Epiphany and Kalikantzari in a previous post of mine.

I can’t tell you the exact recipe as I made the first part by using 35 grams of fresh yeast, a tablespoon brown sugar, about half cup all-purpose flour and a cup of tepid water,  which I mixed to dissolve the yeast and then left it to bubble.

I then separated this mixture and used 2/3 of the mixture to make the dough, by adding more flour, olive oil, salt and water.

I did the same for xerotigana by adding more flour but without using olive oil.  The mixture was left to the consistency of thick batter.

To fry them, it is better to use either a light flavoured olive oil or any other vegetable oil which has a high smoke point.

A tablespoon of batter will make xerotigana about 5  – 6 cm wide.  If you want them smaller, add a teaspoon batter.

Today I was making dough for pizza and since I did not have anything for dessert I remembered xerotigana.

This time my experiment was with apple slices, orange, zest, cinnamon and honey.

(It was very cold, today so, in order to help the batter rise, I put the bowl over a pot with hot water and I covered the pot with a napkin).

From the above recipe, the three ingredients in red should be substituted with  more orange zest (1 – 2 tbsp),  less ginger (1/2 tsp), no chocolate,  1/4 tsp cinnamon and 2 apples, peeled and cored, cut into 1 cm slices.

When fried drizzle lots of honey and cinnamon on top.

This year in the batter I added bananas sliced into 1/2 cm slices.   I used a teaspoon as a measurement, in which I took a slice of banana with the batter and I fried them in olive oil.

I served them the classic way with honey and more cinnamon on top, although drizzling some chocolate ganache on top, passed my mind  while frying them.

However, unfortunately I did not have the ingredients at the time of making them.  The slice of banana was not visible inside when fried as it melted but all the taste was there.

From the previous recipe I reserved 1 cup of batter in which I crumbled some feta and mixed some paprika.

The batter can make fritters but I preferred to bake them in the oven.  It makes a wonderful “mezedaki” or appetizer.

Previous Post: « Happy New Year, with a glimpse in the future!!
Next Post: Kotopoulo Portokalato (Chicken with Oranges) and another Giveaway »