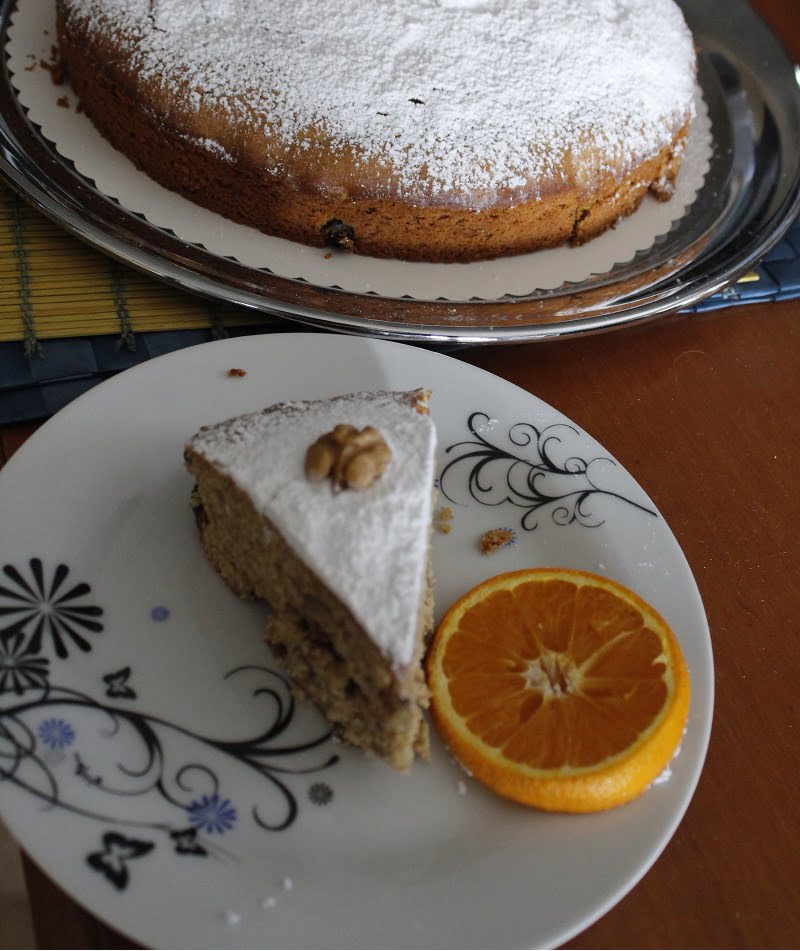 Fanouropita is a Greek, vegan, spicy cake made to honour St. Fanourios, who is known to help people find lost objects or to reveal things to them. 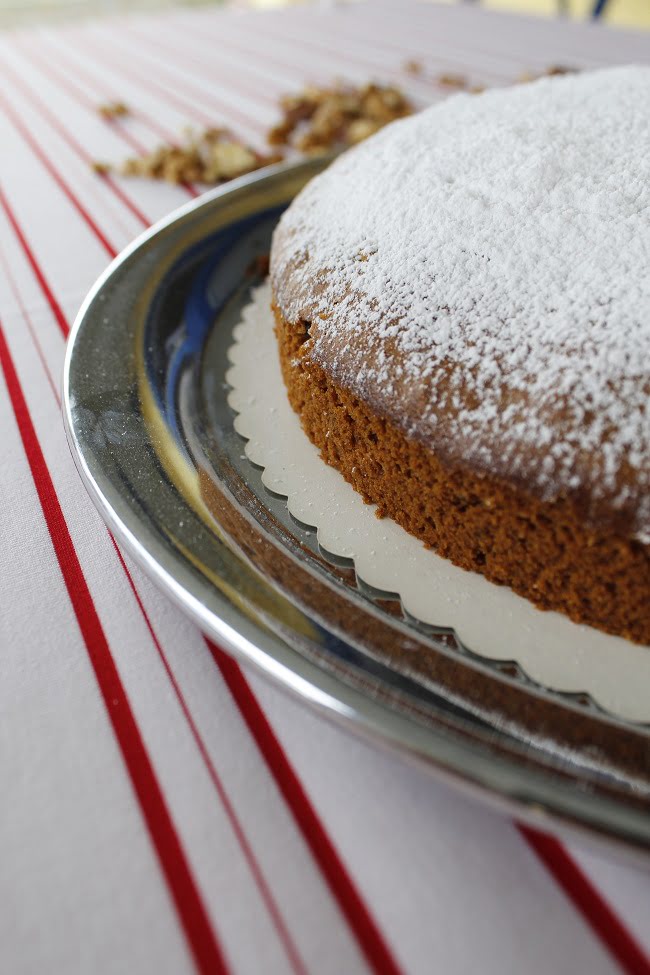 When the lost item is found or what you have asked for has materialized, one should bake a Fanouropita, which is a cake in memory of St. Fanourios’ mother, and give it either to the poor or in church, after the liturgy which takes place either on the eve of Saint Fanourios name day, 26th of August or on the 27th in the morning or at the vesper.

The cake is brought to any church, preferably of  Saint Fanourios also written Phanourios, where the priest blesses it with a nice ceremony.

In Cyprus, apart from the above dates, the faithful can also take the cake to church every Friday.  To be frank, I don’t know if this tradition takes place in Greece as well.

After the liturgy, the cakes are cut and shared with the people. (Have a knife and napkins with you or cut them ahead and wrap each piece in cling film). 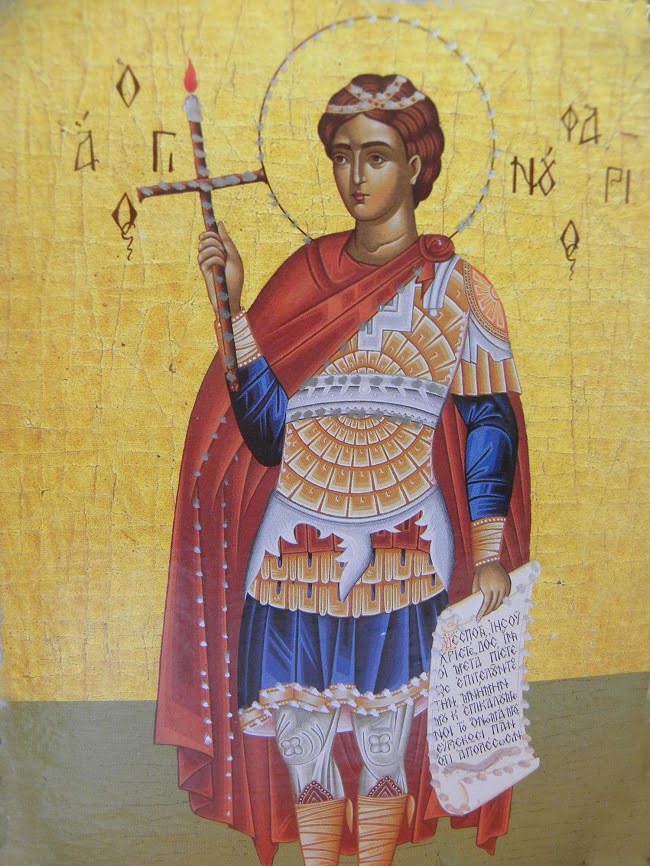 On August 27th, according to the Greek Synaxarion, we commemorate the Holy Martyr Phanourios.

He appeared to people on the island of Rhodes in 1500.

Several people had a vision of the saint and then his icon was discovered.

Aghios Phanouriosis the saint of revelation – that is why he is often depicted as a young soldier holding a sword in one hand and a lit candle in the other.

There is a tradition concerning him and his mother, who was a harlot and great sinner. His love for his mother caused him to pray for her incessantly.

At the time of his martyric death by stoning, he could not even then forget his mother, and with the boldness that is peculiar to athletes of Christ, prayed: “For the sake of these my sufferings, Lord, help all those who will pray to Thee for the salvation of Phanourios’ sinful mother”. 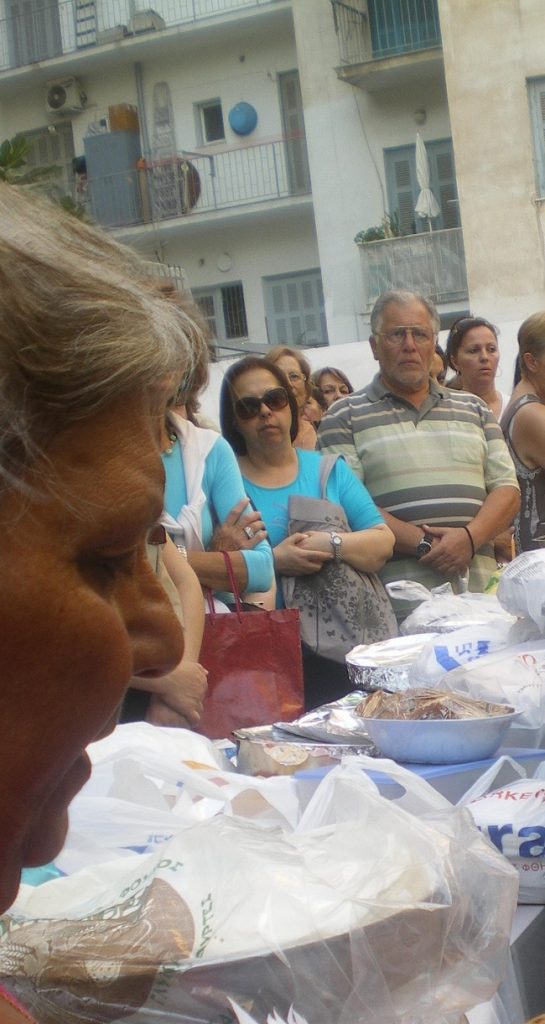 Many to this day pray for his mother and have her listed in their personal diptychs used for commemorations in the Divine Liturgy as “The Mother of St Phanourios” since her name is not known. 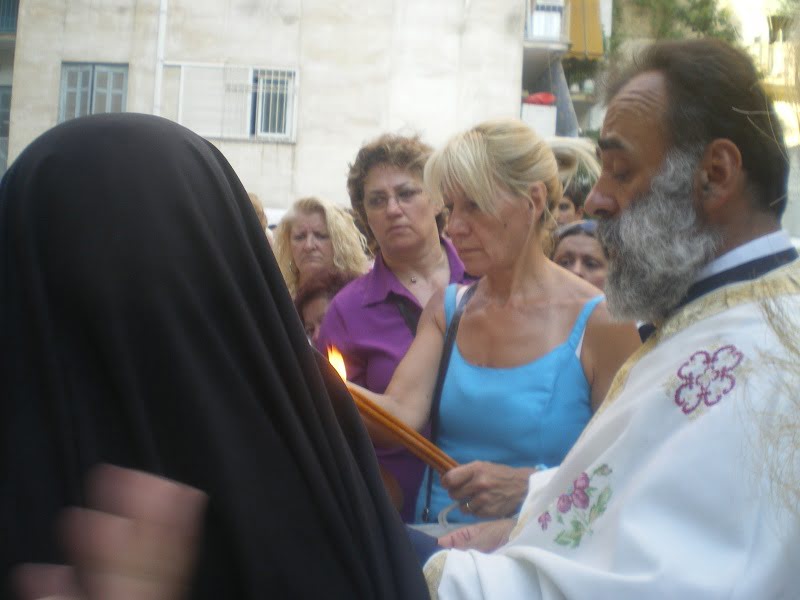 On the day of the Saint, there is a tradition that the faithful bake a special bread (cake), and according to some accounts, give it to the poor as alms in the name of his mother, and others, share it with at least seven other people.

St Phanourios’ name gives a hint about another tradition concerning the Saint. “Phanourios” comes from the Greek word, “phanerono”, meaning “I reveal”.

He is known to help people find lost objects or reveal things that you want to happen. 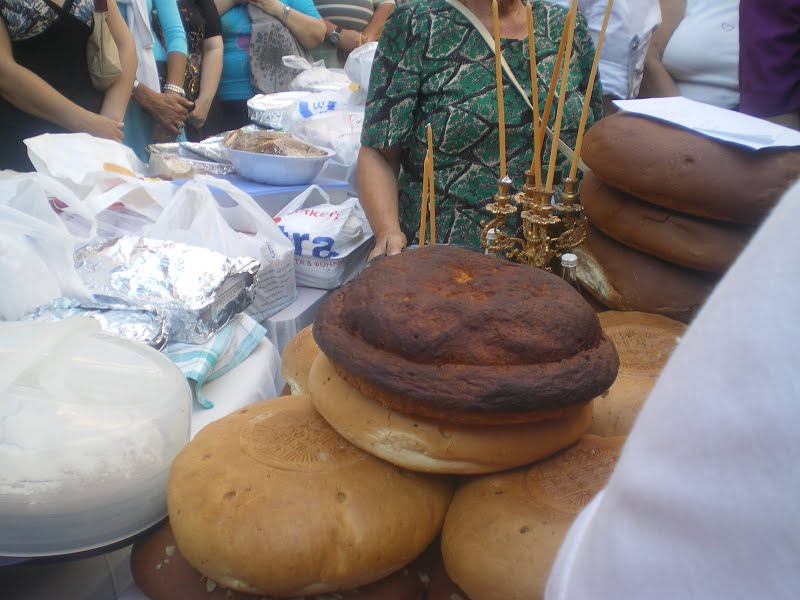 All the cakes you see in the church are made after finding the objects asked to be found.

St Phanourios’ church in Pangrati, in Agiou Fanouriou Street, is a very small church belonging to the Holy Land and the blessing takes place in the back yard.  This year there were more than 200 cakes and breads spread on three big tables.

This cake is really delicious.  You don’t need to be an Orthodox Christian to make it.  In the title I name it as “vegan”.  It can easily be made “vegan” by adding plain tahini and substituting honey with more sugar.

Those receiving the cake must ask for his mother’s sins to be forgiven “Ο Θεός να μακαρίσει τη μάνα του Αγίου Φανουρίου” (the name of his mother is not known) .

A few months back my son lost something which at the time seemed impossible to be found.  After making all possible efforts to recover it, without success, I told him that on the eve of St. Fanourios I would make a cake if what he was looking for was recovered.

A few days later it was miraculously recovered.

The cake must be lenten and contain any of the ingredients listed below provided that the number is odd:  7, 9, 11, etc.

The basic ingredients are flour, sugar, oil, cinnamon, raisins, walnuts and then any other ingredients may also be added.

In Cyprus the tradition says that the cake, after being blessed in church, must be given to 7 women who were married only once and are not divorced.

Before, going to the recipe, as many of you who follow me on Facebook, may have already heard that my beloved brother passed away, after a heart attack, on 20th of August (2010).  He is leaving behind his beloved wife and three children.

Ι wish to thank you all for your lovely messages, either private, here or at facebook after the announcement of the death of my beloved brother.

Although I still need some time to grieve, and it will take some time until I feel like blogging again, I am writing this post for my orthodox readers who may want to make this sweet bread (or cake), in memory of my late brother.

In the meantime there are also some happy moments in our life as well.  Yesterday, we learned  that my daughter has passed at Panteios University of Economics and Political Sciences, in Athens, Department of Sociology.  Also, my son who has finished his first semestre of his Master Degree,  came first in his class and won a scolarship. 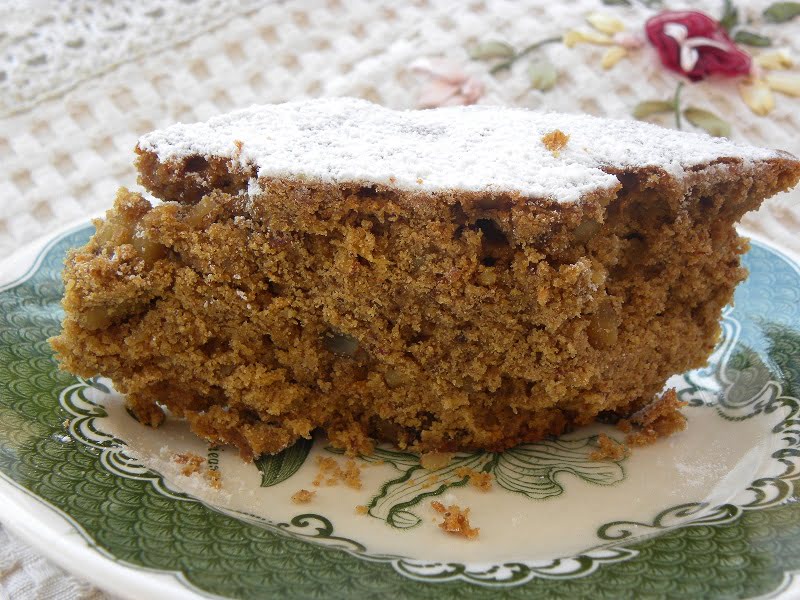 Here is another Phanouropita I made today, as St. Phanourios revealed some great news for our family, which, however, I wish to keep private.

This is a very easy cake which I made without even using a mixer but just a simple whisk. 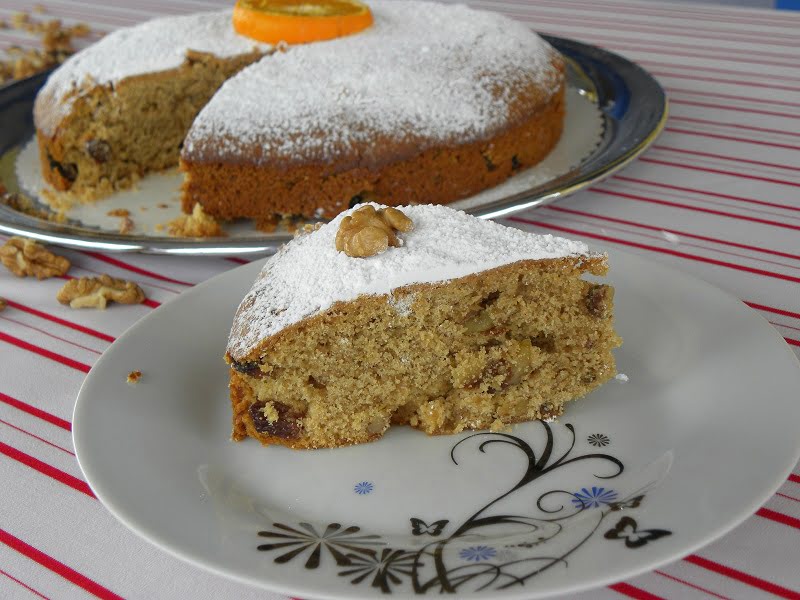 The video was taken in 2018, when making the cake again, this time using the mixer. 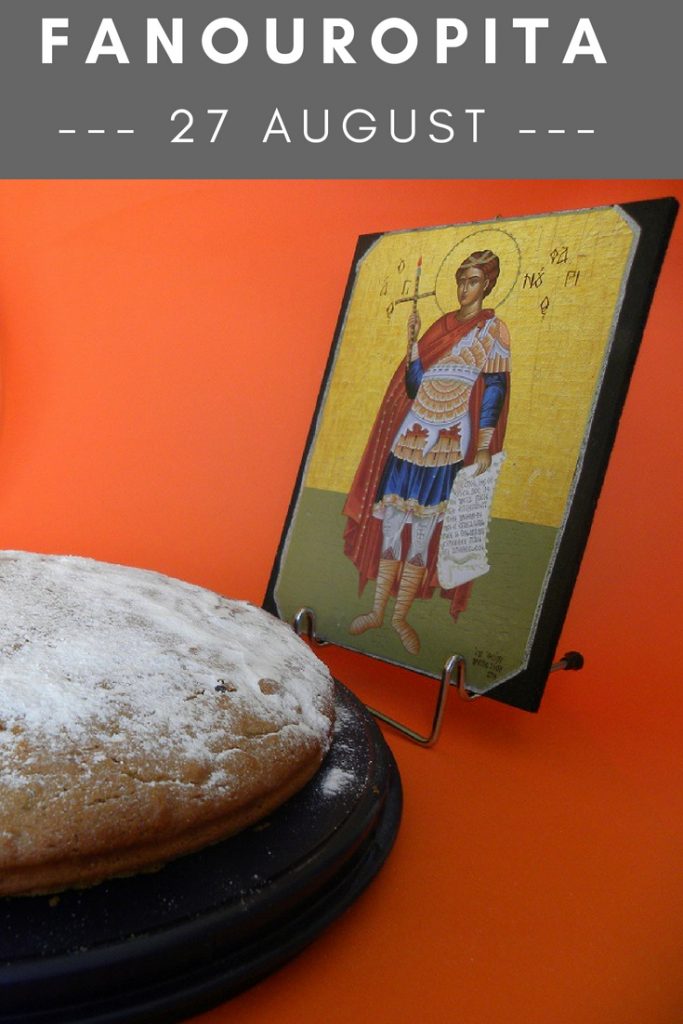