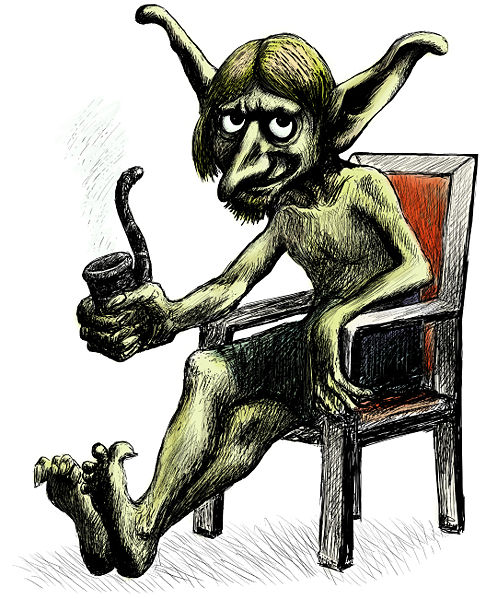 Kalikantzari, (singular Kalikantzaros), which are malevolent goblins, in Greek and Cypriot folklore tradition, get out of the depth of earth during the twelve days of Christmas.

Their job is to destroy the trunk of the tree, where the earth sits on, so that it can collapse and when it is ready to collapse they get out and stroll around in the dark, to torture people in many ways.

When we were kids and heard stories told about them we were scared to death.

Kalikantzari, were described to us as ugly creatures, partly human and partly animal, having horns and tails, goat shaped beards, skinny or fat, short or tall, either getting into houses from the chimneys, steeling food, or urinating on food and mostly playing tricks on people.

In the villages, superstitious housewives would seal the chimneys and any holes in the doors and windows so that Kalikantzari couldn’t get in.

They would throw pieces of meat, sausages or xerotigana (kind of fried dough like doughnuts) on the roof, to keep them occupied and not get in the houses, saying:

On the Eve of Theophaneia, (which means appearance of God) or Phota (which means The Lights) as Epiphany is called, the priest would pass from all the houses, sprinkling holy water to bless the people living there and the kalikantzari would be expelled to go back sawing the trunk holding the foundations of earth, until the next Christmas.

On the day of Epiphany there is the great “Agiasmos” (the word also refers to the holy water itself), service in the church, some of that water  is kept with the family icons and is believed to have healing properties.

After the service in church all people are gathered wherever there are ports, rivers or lakes, even swimming pools and  the priest throws the cross into the water, even if the temperature is below 0 C and a few young men and brave girls will dive in to retrieve it – the one who catches the cross is considered to be blessed for all the year.

The celebrations throughout the Twelve days of Christmas, called Dodekaimera, period until Epiphany, (6th January), end on Epiphany day where Greek Christmas celebrations conclude with the feast called  “Ta Phota” meaning “The Lights”.

In the Orthodox Church this feast is important as the baptism of Christ.   On the Eve of this day the priest would go round all houses and perform “ayiasmos” sprinkle holy water to bless the houses and all those who live there.

It is believed that this visit by the priest would expel the “kallikantzari” who leave before they can finish sawing the world’s foundations.

Years back children would pass from the houses singing Phota kalanta but these traditions do not appear any more in the big towns where parents are afraid to let their children knock on  doors of people they do not know and trust but in some villages these traditions still exist.

These are the carols sung during Theophaneia: